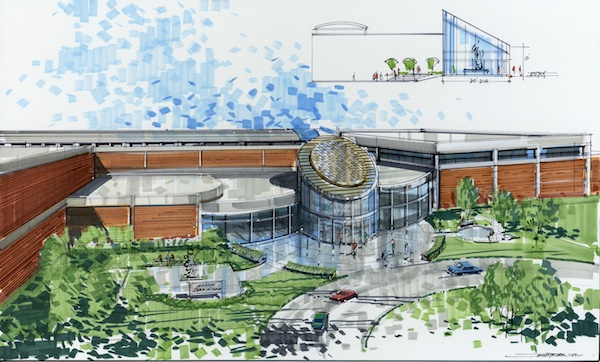 UVU raised $15.4 million in private funding for a new performing and visual arts building. They are asking for an additional $36 million from the Utah State Legislature. (Rendering courtesy UVU)

Utah Valley University made history last week when President Matthew Holland announced the school had raised $15.4 million for a new performing and visual arts building — the largest amount of private funding the school has ever raised for a new facility.

“I’ve been looking forward to this for a long time,” Holland said. “I’ve been asking for the patience of this college. They definitely need it. It’s definitely put a burden on them, but you can only do so many things at once.”

[pullquote]”Like labs for science, we need labs for the arts.” —Newell Dayley, UVU dean of the School of the Arts[/pullquote]

On UVU’s campus, about 20,000 students take arts classes each year.

Currently, the UVU School of Arts is spread far and wide across Orem and is packaged into small spaces: its art gallery (Woodbury Art Exhibit) is at University Mall, recital hall is a black box and the program uses shared space with other colleges.

Newell Dayley, UVU dean of the School of the Arts, said that UVU arts professors have been misplaced working out of temporary buildings.

“We’ve been doing a lot with less,” Dayley said. “The faculty has been the key to that; they’ve embraced the problems and done a great job anyway. So this means everything to us. This means in the future the arts at UVU will be taught in facilities that are actual art facilities. Like labs for science, we need labs for the arts.”

Professors are teaching in facilities that were designed for old technology and have no sound treatment, meaning they are outdated by years. 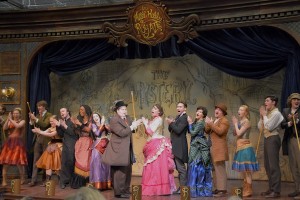 UVU students perform a number from “The Mystery of Edwin Drood” before President Holland announced the new performing arts building. “In terms of having things that we haven’t had before, virtually everything will be new and exciting,” Holland said. “We don’t have a regular stage. What you see behind me, this is a black box theater, it’s not a true premium stage with stadium seating and an orchestra pit. That in and of it self will be huge for us.”

“Our facilities will finally catch up with where we are and allow us to move forward from there,” Dayley said. … “These students coming to UVU in the arts are some of the best in the state. They deserve these kinds of learning and teaching facilities. It’s what they are going to work in.”

Holland hopes that the university can have the new visual arts building done in the next 2-3 years, but knows that construction takes time. He is planning on a year to design and plan the building and another 18 months to a year to build it.

Holland will be attending the Utah State Legislature to ask for an additional $36 million to help with building costs.

“We’re ranked pretty low this year, and I understand that,” Holland said. “And I think there’s a tall hurdle for us there. But I’m going to give it a shot. I’m going to see if it changes everything, and if not, I hope it really gets us t-ed up for next year and I’m just going to take whatever progress we can make.”

Last year, UVU received $21 million from the legislature at the end of the session.

UVU will continue to turn towards community members and university friends to help fund the new building.

“We do not yet have a long extended alumni base of support, but we have turned to and found friends and supporters that have caught the vision of what this institution is trying to become,” Holland said.