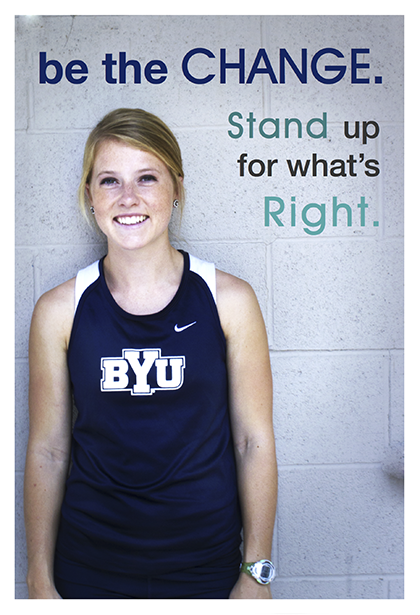 BYU’s Voices of Courage campaign is one of many on-campus efforts created to appropriately deal with sexual violence.

Five years ago Tiffany Turley was sexually assaulted, becoming living proof that the traumatic and life-changing experience can happen to anyone at any time.

“It rocks your emotional and physical foundation,” said Turley, who now works as the manager of BYU’s Women’s Services and Resources office. “It’s one of the hardest situations a person can go through.”

Like most sexual assault victims, Turley immediately placed blame on herself. Although she did seek counseling and therapy through a rape recovery center, it took her a full year to believe she wasn’t at fault.

“At first, that’s where my mind went — what could I have done to prevent this? I had to come to peace with myself and realize this didn’t happen because of anything I did. It just didn’t,” Turley said. “Rape happens because people choose to rape. It doesn’t matter what someone is wearing or doing, and it’s not because the victim chooses to be where she was. That wasn’t the cause of this.”

A 2007 study run by the Utah Commission on Criminal and Juvenile Justice shows that Turley’s experience is more common than most people realize. One in three Utah women will be a victim of some form of sexual assault in her lifetime. And one in eight women in Utah will be raped sometime during her lifetime — a rate that is higher than the national average.

Despite these staggering numbers, only 10 percent of rape victims in Utah report their experiences to law enforcement. The 2007 Rape in Utah study and a recent U.S. Senate subcommittee hearing on crime and drugs indicate that many victims do not report the crime for fear of not being believed.

As a forensic nurse and a sexual assault nurse examiner, BYU assistant professor Julie Valentine has worked with hundreds of sexually abused women.

“Many women do not feel they’ll be believed,” Valentine said. “If a woman is raped and the next day she thinks, ‘I’ve got to talk to somebody about it,’ she’s really impacted by who she first turns to. If she goes to a sister who says, ‘This is awful, we need to report,’ she’s more likely to report. If the sister says, ‘Oh, you were out at 2 a.m. and you were wearing that low-cut shirt,’ the victim blaming begins, and she will then not go to get help.”

Turley chalks it up to the culture and society we’re a part of.

Valentine says she has never taken care of a patient who did not victim blame. And from her experience working with women from all walks of life, she believes LDS women are even more likely to blame themselves than other victims might.

Fortunately, state lawmakers and local university organizations are quickly progressing in their efforts to both prevent sexual crimes and to deal with the many sexual assaults that do take place.

A brand new resolution is up before the state legislature that would officially involve Utah in the “Start by Believing” campaign, a public awareness effort to change the way we respond to rape and sexual assault in our communities.

“We have a long way to go, and it’s all about changing the perception of society — potential jurors, judges, law enforcement, the friend, the sister,” Valentine said. “Start by Believing is really an education campaign. It’s about a shift in society in how we view rape and sexual assault. It’s about getting rid of the victim blaming.”

In Utah County, universities are tackling the issue with on-campus support networks and events.

At BYU, students have the opportunity to receive free counseling through the campus counseling center. For emergencies, an on-call counselor is available 24-7. Counselors are trained, certified therapists who provide professional and confidential counseling to students who may by victims of sexual assault.

The Title IX office on BYU’s campus is prepared not only to respond quickly to connect student victims with the appropriate officials but also to assist with interim measures to help victims feel safe, such as arranging for an escort to class or work, setting up alternative housing, altering class schedules to prevent victims and perpetrators from being in the same classes, coordinating with the academic support office and working with police to issue “no contact” letters.

“If a student comes in and reports a sexual assault, the first and foremost thing they’ll get is support,” Turley said. “Obviously the university does what it needs to do regarding investigating. But the university offers support and kindness and respect. It’s not just a women’s issue, it’s a human issue, and we support a culture of nonviolence.”

4 Mormon athletes who appeared in film and television Next post