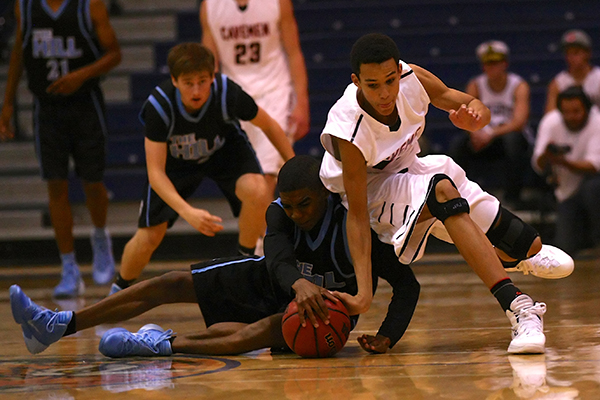 AMERICAN FORK — When you are the son of a former NBA player like Brendan Bailey, being good at basketball is almost second nature. Basketball is in Bailey’s DNA. It has defined his daily routine since he was old enough to dribble and shoot.

Sleeping in late or lounging around watching cartoons were not his childhood activities of choice. Bailey typically began each morning by polishing basketball fundamentals like shooting, dribbling and passing with his father.

Even as a teenager, mornings are reserved for father and son basketball time.

“He’s always in the gym with me working on my strengths and weaknesses,” Bailey said. “He just teaches life skills mostly through basketball, (showing) how it can build your character and make you a better person.”

The results can immediately be seen in what Bailey has done for American Fork this season. He ranks second for the Cavemen in scoring at 15.0 points per game and in rebounding with 6.0 rebounds per game.

This has occurred even as a four-inch growth spurt forced him to moved inside this season after playing mostly on the perimeter before his junior year. Bailey has adjusted the demands and expectations that come with playing at forward.

“He’s a player who has a lot of ability,” American Fork coach Doug Meacham said. “He’s very intelligent in terms of how he sees the floor. He’s a competitor. He’s a player that, each year, has gotten incrementally better.”

[pullquote]”It’s not always going to be my night. I’m going to need to give the ball to my teammates and be able to facilitate the offense when they add pressure.” —Brendan Bailey, American Fork forward[/pullquote]

One testament to Bailey’s progress at forward the increased defensive attention he has drawn this season. Opponents make a point of blanketing him with double teams whenever possible.

It has helped him grow as a leader – a goal Bailey set for himself before the season started. He has looked to involve teammates in a higher number of plays to exploit that defensive pressure.

“You just have to be able to be a playmaker for other players,” Bailey said. “If you get the ball, and you get double teamed, you have to know somebody else is open. If you’re getting face guarded, you have to set a screen for someone and get them open. It’s not always going to be my night. I’m going to need to give the ball to my teammates and be able to facilitate the offense when they add pressure.” 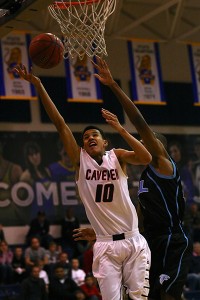 Brendan Bailey draws a foul in a game during the Great Western Shootout. (Photo by Shane Marshall/ PrepsUtah.com)

How much potential does Bailey possess? His talent and athleticism is already good enough that several colleges started pursuing him after his sophomore season. Bailey drew attention from Arizona State, California, Gonzaga, Utah and BYU.

He eventually committed to the Sun Devils before the start of his junior season. Bailey chose to go to Tempe, in part, because his older sister BreElle already plays volleyball for Arizona State.

Everything Arizona State offered as a basketball program also fit like a glove with what Bailey wants at the collegiate level. He liked what he heard from the coaching staff and what he saw in the team’s the style of play. More importantly, he felt like committing early allowed him to focus on preparing for college earlier.

“It takes off a lot of pressure from a school standpoint and a basketball standpoint,” Bailey said. “I can focus more on school and my individual game. I can also work on what ASU wants me to work on to become a better player and fit into their program more.”

Choosing to pursue a basketball career means that Brendan will always draw inevitable comparisons with his father Thurl Bailey.

Thurl made a name for himself a star forward at North Carolina State. He led the Wolfpack to the school’s second NCAA Championship in 1983. The Utah Jazz made Thurl a first round  pick in the 1983 NBA Draft a few months later. His NBA career spanned 13 seasons with the Jazz and the Minnesota Timberwolves and Thurl posted career averages of 12.8 points and 5.1 rebounds.

Meacham already sees many similarities passed from father to son. Bailey distinguished himself as American Fork’s top perimeter defender a season ago and affected many shooters with his length and positioning. This season, he has also showcased offensive versatility that has served him well.

Bailey has become a stronger force at the rim, a trait that Meacham believes will serve him well in his career.

“As he grows into that body, he’s only going to get better,” Meacham said. “Each year, he’s been able to finish better and better at the rim. He knows he helps us when he goes at the rim with a purpose.”

The Cavemen will face either Brighton or Copper Hills on Monday, Feb. 23, in the first round of the 5A UHSAA Boys Basketball Championships depending on if Lone Peak or American Fork earns the No. 1 seed for their region.