Home Sports BYU The Midas Touch vs. the Coal Miner: The methods behind shooting success of Jimmer and Haws

The Midas Touch vs. the Coal Miner: The methods behind shooting success of Jimmer and Haws 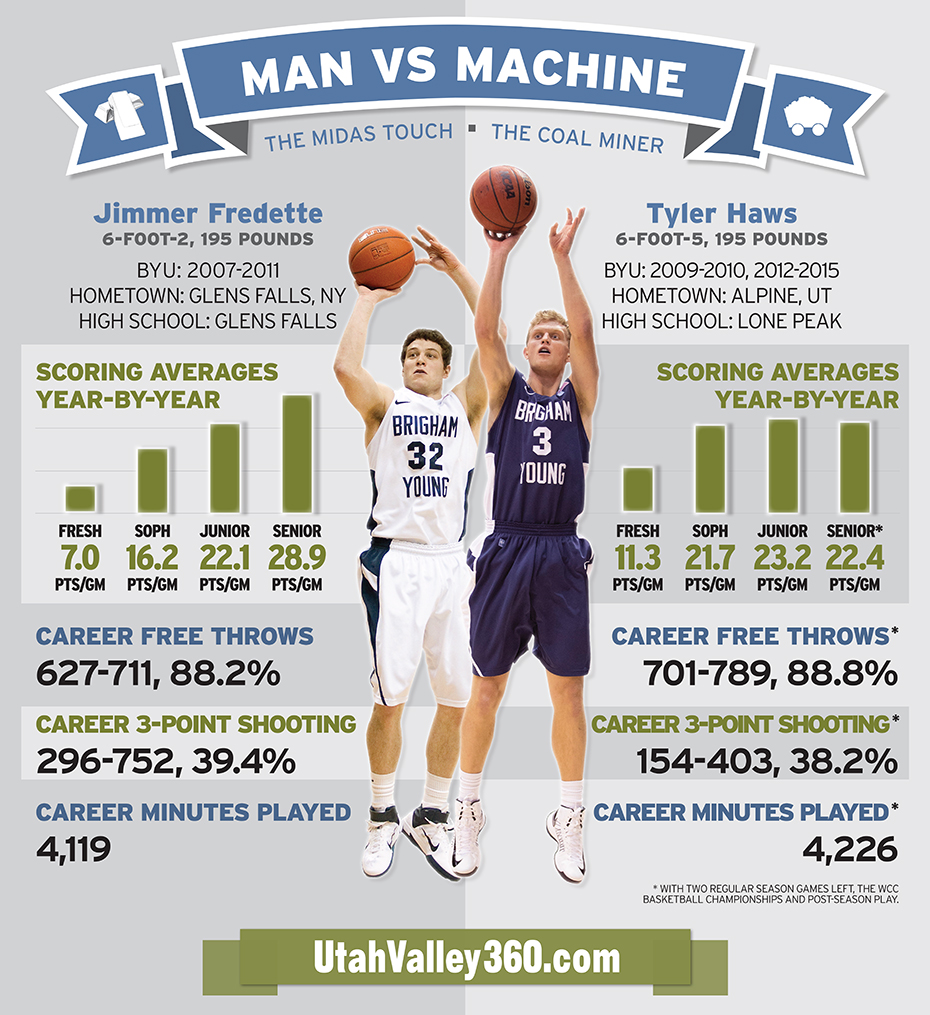 The story of King Midas and his golden touch is a notorious mythological tale. As king of Phrygia, he was blessed with an abundance of wealth and possessions, enough to make a man content for many lifetimes. But King Midas wanted more.

So when Dionyssus, the god of wine and revelry, blessed King Midas with his true hearts desire — to turn everything he touched to gold — it became so. And thus Midas’ golden touch is considered ancient history.

Little did you know that a modern-day “King Midas,” hailing from upstate New York, settled in Provo from 2007 to 2011, claimed Provo as his kingdom and set college basketball on fire. Everything he touched turned to gold. His name, of course, was Jimmer Fredette.

“The phrase that comes to mind is ‘the Midas Touch vs. the Coal Miner,'” said Deseret News sports reporter Jeff Call, comparing Jimmer Fredette and Tyler Haws. “His senior year, Jimmer was so flashy and he had so many signature moments and high-scoring games. Tyler, on the other hand, was so consistent, even when injured. You always knew Ty was good for 20-something points night-in and night-out. And his mid-range game, which is a lost art, has been amazing to watch. You can’t truly appreciate Tyler until you watch how he operates without the ball, how hard he works to get open.”

[pullquote]”His game was creative, his shot distances were jaw-dropping, and his point totals were staggering. He attracted a lot of attention for all of those reasons, and his personality added to the appeal. Jimmer was affable and approachable, confident yet humble, and played on a great team.” —Greg Wrubell, Voice of the Cougars[/pullquote]

Tyler Haws, then, is the Coal Miner — there is no task too large for him as he’s been capable since day one in a Cougar uniform of creating his own shot and getting his 20-plus points a night. Slowly, steadily, he’s put himself in position to help the team win night in and night out. Steady as he goes, Haws has worked his way to the forefront of BYU’s all-time scoring list, needing just seven more points to pass the King.

The two guards are unique talents. One lit up the basket night after night, scoring from what has become known as “Jimmer Range,” defined on Urban Dictionary as someone with “extreme 3-point range,” and someone who “only shoots 3-pointers.” Fredette’s 3-point shot was the skill that paved his path to basketball glory, taking home the 2011 National Player of the Year Award and a lasting legacy among BYU fans and college basketball fans forever.

Just as important to Fredette’s play on the court, was his otherworldly ability to cause complete hysteria off of it. “Jimmermania” ensued in Provo, and sports fans — and non-sports fan alike — knew his name and the parody “Teach Me How To Jimmer,” from Cali Swag District’s “Teach Me How To Dougie.” Fredette left a lasting legacy in which fans still remained as frenzied as ever when hearing his name.

“His game was creative, his shot distances were jaw-dropping, and his point totals were staggering,” said the Voice of the Cougars Greg Wrubell. “He attracted a lot of attention for all of those reasons, and his personality added to the appeal. Jimmer was affable and approachable, confident yet humble, and played on a great team.”

[pullquote]”Tyler Haws is the poster child for consistency. … Tyler’s game is more understated than Jimmer’s, but just as deadly. Haws’ jump shot is as pure as you’re going to find.” —Jason Shepherd, Host of KSL radio’s Cougar Sport Saturday[/pullquote]

Fredette routinely stuffed the stat sheet, drilling three after three, compiling a career, and BYU all-time mark of 296 made threes on 752 attempts. In what is likely his most famous game, Fredette scored 52 points against New Mexico in the semifinals of the 2011 Mountain West Conference tournament, setting a BYU single-game record, and eclipsing Danny Ainge on the all-time scoring list, a record that stood for 30 years.

But now it’s the “Great and Powerful” Haws’ turn in the spotlight. Either at Portland on Feb. 26 or at Gonzaga on Feb. 28, a new king will be born. He didn’t have the golden touch like Fredette, but his uncanny ability to create space and find his shot anywhere on the court is something his scoring counterpart was rarely able to do.

“Tyler Haws is the poster child for consistency,” said host of KSL radio’s Cougar Sport Saturday Jason Shepherd. “What makes him so special is that he continues to score at a high level despite being the focal point of every opponent’s defense. Tyler’s game is more understated than Jimmer’s, but just as deadly. Haws’ jump shot is as pure as you’re going to find.”

Both players have then, performed at a level unmatched by most BYU basketball players. Whether it was King Fredette’s range from down town, or Haws’ ability to work every corner of the court to his advantage, each found a means, in their own way, to turn their games into pure gold.

“Both Tyler and Jimmer are great in their own ways,” Call said, “and it’s astounding that we’ve seen a pair like them in such a short amount of time.”

Stephen Hales' widow replaces him on Provo council Next post