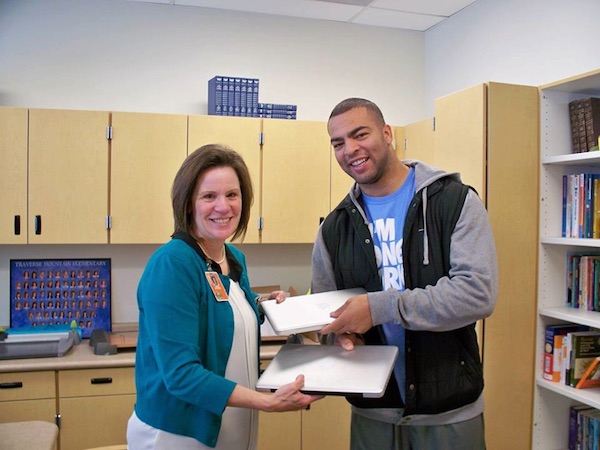 LEHI — It turns out that accidentally switching computers with a stranger in the airport security line can be a good thing.

“While going through airport security last Thursday, my laptop got switched with the man behind me in line. He discovered the problem on his way to Miami. He googled me and found out I am a principal so he called my secretary and gave his name and number. Meanwhile I was on my way to Minneapolis when I got the horrible news. You can imagine how worried I was to discover a stranger had my laptop. He texted me and we set up a time and place to trade back.

“While I was venting to Greg at dinner, I told him I was so worried about my computer. I told him some stranger by the name of Kyle Van Noy had my laptop and I was very worried. Greg asked me to repeat his name and then informed me Kyle is a linebacker with the Detroit Lions. He used to play for BYU.

“Kyle graciously came to my school today to trade back our laptops. He was so kind to go into 35 classrooms and allow 1000 students to have their class picture with him. He answered questions, gave them all high 5s and raced them in PE. He signed an autograph, which we copied 1000 times for all the kids. What an awesome guy. I just became a Detroit Lions fan and will forever watch out for #53. Thanks, Kyle, for being such a role model for the kids!”

Van Noy was a linebacker for the Cougars from 2010–13 and earned many honors including being named to five different All-America teams his senior year. He currently plays for the Detroit Lions.