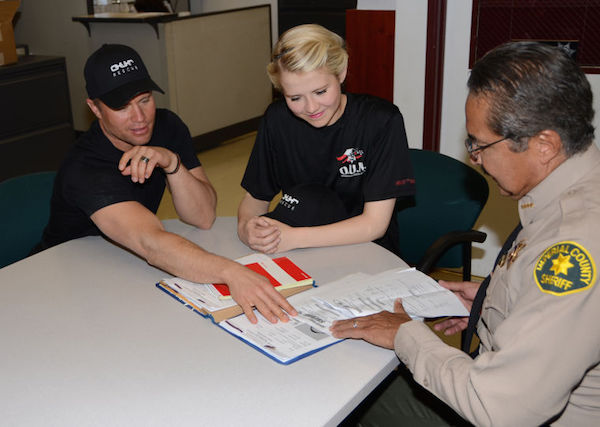 Back where she was held captive. Back where she feared she would never see her family again. Back in Imperial County, California. But this time she had shifted from defense to offense.

In 2002, Elizabeth Smart made headlines when she was kidnapped from her bedroom in Salt Lake. Smart, only 14 at the time, spent nine months held captive in the mountains near her family’s home and later in Imperial County, California, which is where she returned 12 years later for a special mission with Operation Underground Railroad.

For 12 years as a U.S. government agent, Tim Ballard worked with an undercover operative to save American children from sex trafficking, child pornography and sex tourism. But because he worked for the U.S. government, he could only rescue American children — everywhere else was outside his jurisdiction. On multiple occasions, his team was forced to leave innocent children from other nations behind.

“In my last couple years of working for the government, … I had to walk away from operations where the foreign governments wanted to work; they wanted help, but they didn’t have the resources and they didn’t really have a plan. I finally just decided that I would try a new approach and go private and take the tools we learned,” Ballard said.

[pullquote]“Heroes to us are those who, when in the 19th century slavery in America was going on in the country, they took action. The Underground Railroad was for people who took action. … They decided to go face to face with evil and whatever was necessary to get slaves out of bondage. And that’s exactly what we try to do.” —Tim Ballard, Founder of O.U.R.[/pullquote]

So Ballard left his job and Operation Underground Railroad came to fruition in 2013. The nonprofit organization is very similar to what Ballard was doing before – going on missions to rescue children — only now Ballard can save children in countries around the world.

“(We do) not worry about which jurisdiction it’s under or about what courtroom the case is going to be prosecuted in — whether it’s a foreign one or a U.S.-based one — but we just go save the kids and get the bad guys in jail,” Ballard said.

Today there are 27 million slaves, according to Ballard. Of those slaves, roughly 10 million are commercial sex slaves. Out of the 10 million, about 2 million are children. Ballard and his team members realize that although slavery was outlawed nearly 150 years ago, it never went away — it just went underground. So O.U.R. operatives go underground to eradicate it.

“Heroes to us are those who, when in the 19th century slavery in America was going on in the country, they took action,” Ballard said. “The Underground Railroad was for people who took action. … They decided to go face to face with evil and whatever was necessary to get slaves out of bondage. And that’s exactly what we try to do.”

Director Gerald Molen, best known for “Schindler’s List,” approached Ballard interested in making a documentary of O.U.R.’s rescue efforts. Using strategically placed high tech cameras tiny enough to hide on watches, phones, shirts, hats, sunglasses, jackets and backpacks, the film crew caught and heard most of the action. They rounded out the shots with small helicopters, gyro rigs, DSLRs and small point and shoots, which means the sex traffickers never knew the cameras were there.

“It simplifies it interestingly because these guys are here with the most high tech undercover cameras you can dream up,” Ballard said. “I worked as an undercover operative for the government for years and I never had the kind of spy technology that these guys brought.”

The 87-minute film has as many as 28 cameras filming at one time, though no one could tell the cameras were there.

“All this footage also had to serve two masters,” Molen said in a press release. “First, we were making a movie and we needed enough footage to cut that would tell a story. Second, we had to get the traffickers to talk and say things on camera because all the footage was also going to be used in the prosecution of these people by their local authorities.”

When O.U.R. left the countries after an operation, they would leave a hard drive of video evidence — including phone calls, dealings and scenes from interactions with sex traffickers — with the prosecutors as evidence to convict the sex traffickers.

“To end up prosecuting these traffickers and child abusers, it requires them to put children on the stand,” Ballard said. “And whenever that is requisite for prosecution, that’s a really bad day because it re-victimizes them. And so a lot of the prosecutions fall through and the guys don’t go to jail. … Because of ‘The Abolitionists’ and the film crew and what they provide, … there’s no reason to put the kid on the stand.”

Currently, “The Abolitionists” is showing rare screenings in Utah of the documentary. The next Utah screening will be on Wednesday, March 18 at 7 p.m. in the Joseph Smith Building on BYU’s campus. However, they are working on deals in LA for a wide release of the movie.

The film only documents O.U.R.’s first two missions. However, the film crews have continued to follow O.U.R. teams on their missions and they are considering making a TV series out of 13 episodes filmed so far — one of which is in Imperial County, California where Elizabeth Smart joined them for a mission.

Since Smart’s escape and rescue 12 years ago, Smart has changed her identifier from victim to activist, establishing the Elizabeth Smart Foundation to help protect and save abused children. Now Ballard says Smart is “hands-on” with O.U.R.

“(Elizabeth) was so excited about getting trained as a jump team member to turn the tables on these traffickers, and sitting on the other side of the table and taking it to them,” Ballard said.

Smart helped O.U.R. as they trained local law enforcement in Imperial County, California, teaching them tools to seek out child pornographers and child abusers. As part of the training, Smart took the officers to the very camp where she was held captive in California.

“During the training, she did participate and she really inspired the officers and explained to them the problem, had them all in tears telling her story and really injected a lot of energy into the officers,” Ballard said.

While there, they were able to identify one man involved in child pornography who admitted to planning to capture and rape a 7-year-old girl. As officers pulled the man from the house, Smart stood next to O.U.R. jump team members in the front yard as they watched the police department foil one man’s plans to harm children.

From the beginning of O.U.R., the nonprofit has been working with the Elizabeth Smart Foundation, but this was the first time Smart was with them on a mission. And now the two nonprofit organizations are in the process of completely merging the two companies.

Joint effort to save children

When O.U.R. began in 2013, Ed Smart (Elizabeth’s father) came on as the director for prevention and rehabilitation. His role is to help governments in the countries O.U.R. rescues children establish programs to help the freed children recover.

“This guy is so connected and he’s such a great asset to our team because he knows all the players in the game and he’s so passionate about it because of his personal experiences,” Ballard said about Ed Smart.

The idea to completely merge the similar-minded nonprofit organizations came from Ed Smart a short while later.

“In September, as we discussed the future of O.U.R., Elizabeth and I both felt there was a terrific synergy between our missions and it would be a no brainer to see the two organizations merge to maximize the potential of preventing sexual abuse,  rescuing children and providing them with an opportunity for a better future,” Ed Smart said.

Ed and Elizabeth Smart set out to join forces with O.U.R., and Elizabeth went on a operation and currently serves on O.U.R.’s board of governors.

“Ed actually came to us and said, ‘Let’s join forces. Let’s become one organization, so that we can really utilize the power of Elizabeth Smart and her experience and her name,’” Ballard said. … “We’re going to keep both names, but we are not just two organizations, but we are becoming one organization because our goals are so much aligned.”

The combined organizations are celebrating their merge with a benefit concert on March 14 at 7 p.m. at the UCCU Center. It will be the first time the two organizations will appear together. The concert, Utah’s Stars and Friends, features Alfie Boe, Jenny Oaks Baker and other local musical talent. Ticket sales will help raise funds for future operations to rescue children.

“The benefit concert has helped in two ways,” Ed Smart said. “First, it has given us an opportunity of creating awareness  of the issues through the publicity, and, secondly, it is helping us raise funds for future missions, intervention programs and prevention.”

O.U.R. updates their Facebook page every time they have another successful mission. The most recent rescue freed 29 victims, where the youngest was 13 years old, and led to the arrest of six traffickers.

But this is only the beginning of the joint efforts of the Elizabeth Smart Foundation and Operation Underground Railroad. They will continue to raise awareness in an unknowingly ignorant world.

“I think (there is a lack of awareness) for a couple of reasons: This is a dark world. It works in the shadows, so unless you go into it like we’re doing, you can’t really see it,” Ballard said. “Someone’s got to go in and show the world what’s going on. And the few that have gone in, they haven’t gone in with cameras like we are to show people so people hear about it but they don’t really internalize it. They don’t see it, and part of the problem there is they don’t want to see it.”

Road work ahead: Expect construction on I-15 in Lehi soon Next post