Cougars give up 17-point first-half lead, fall to Ole Miss in Dayton 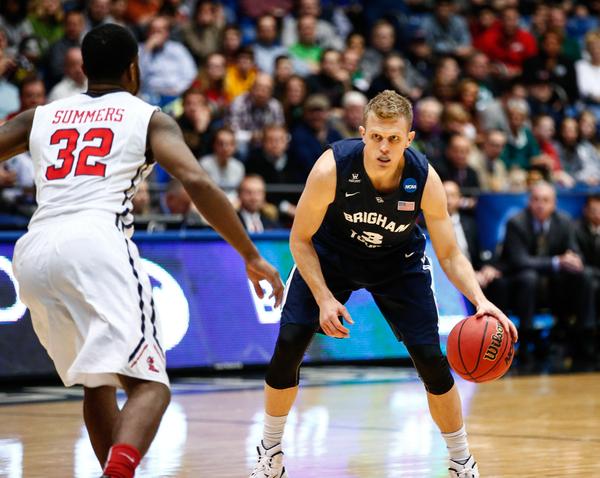 BYU’s Tyler Haws dribbles the ball in the first half of the Cougars’ First Four game against Ole Miss in Dayton, Ohio. (BYU Photo/Mark Philbrick)

After going up 17 points on the Ole Miss Rebels to end the first half, the Cougars let their lead slip away in a 7-minute stretch in the second half, as they fell to the Rebels 94–90 in Dayton, Ohio Tuesday night.

Tyler Haws led the way for the Cougars with 33 points and five rebounds. Stefan Moody roared in the second half for 26 points and five assists, including a huge three that gave the Rebels their first lead.

It’s here. Finally. The First Four matchup between BYU and Ole Miss in the start of what should be an exciting NCAA Tournament.

And it didn’t take long for the Cougars and Rebels to get on the court, with play-in games tipping just two days following Selection Sunday.

It took a few minutes, but BYU got on the board first with a layup from junior guard Chase Fischer, who followed it up with two straight threes.

BYU’s defense, strengthened in recent weeks, held strong in the first three minutes as the Cougars held the rebels scoreless and rebounded with ease with Kyle Collinsworth and Corbin Kaufusi battling the Rebels hard in the paint.

It wasn’t until close to the 16-minute mark that Ole Miss’ guard Jarvis Summers hit a jumper to get the Rebels on the board, and then going on a 6–0 run to cut the Cougar lead to two.

Chase Fischer, though, stayed hot and hit another three…

CHASE FISCHER HAS ALL 11.

Luckily for the Cougars, Tyler Haws followed up Fischer’s three with a jumper of his own.

The Cougars, virtually impossible to beat when hot from beyond the arc, got just what they needed from their guards in the first half, as Skyler Halford dropped a pretty three to stretch the Cougars’ lead to 16–9 with 11:41 in the first half.

That's 17-straight games with a 3 for Halford, the fifth-longest streak in a season in BYU history #BYUhoops

In troubling news, the Cougars got into foul trouble on the offensive end, something the crippled their options down the stretch against Gonzaga in the West Coast Conference Championship game. Haws, Collinsworth, Kaufusi, Josh Sharp, Frank Bartley and Halford all collected one with more than 11 minutes left in the first half.

And just like that the pace slowed (never a good sign for BYU) and Stefan Moody (16 ppg) hit a couple threes to get the Rebels to within one.

Fischer, who broke BYU’s single-game record for made threes (10) in a game in non-conference play, hit his fourth three and Haws followed it up with another from beyond the arc to give the Cougars a five-point lead with 7:59 remaining.

Solid Rebel defense down low didn’t allow for many inside opportunities for the Cougars, but quick ball movement kept the Fischer and Haws open, and luckily they were hitting from downtown. Without even blinking Haws had 12 points and a couple three balls.

Then with 4:18 left in the half, Halford kept pouring it on the Rebels, and hit a deep straightaway three from Jimmer-range to put the Cougars up double digits, 36–25.

Skyler Halford has the Jimmer touch now. BYU up 36-25 after his 3-pointer. Cougars 8-of-13 from 3-point range. #BYUvsOleMiss #FirstFour

And then Ole Miss got Haws’ed, who hit three consecutive shots to stretch the lead to 46–31 with just over a minute left. He only missed four of his 12 first-half attempts from the field for 19 points.

Out of the break and the Cougars up big, Haws began where he left off and nailed another jumper. But the Rebels made a little run to cut the Cougars’ lead to 11 before a sneaky feed from Haws to Halford down the lane stopped a 3-minute scoring drought to give the Cougars a 53–40 lead with just over 15 minutes remaining.

But consecutive flushes from Ole Miss got the Rebels to within single digits of the Cougars as BYU started to play a more “prevent” style defense and were cold from three.

BYU is 0-for-4 on threes in the second half after shooting 10-for-15 in the first half. Those things tend to even out in the long run.

Haws missed his first five shots in the half after only missing four the entire first half, and Moody hit a jumper and the Rebels only trailed by seven with 11 minutes remaining.

But then THIS happened.

BYU finally hit its first three of the half when Halford drained a three with under 10 minutes left to put the Cougars up 66–57.

But it got ugly real quick for the Cougars, who saw their lead slip away as Ole Miss continued to pound the paint and throw in jams. Ole Miss led 72–68 with 6:11 left.

Cold. BYU couldn’t hit from outside and the Cougar’s big’s got out-muscled down low. The Cougars cut the deficit to four with just over five minutes left, but it felt more like 10.

Fischer, silenced the majority of the second half, then pulled up from three with nobody under the basket and hit a huge three, giving the Cougars an 80–78 lead with less than four minutes remaining.

And from there it went back and forth, as Moody and Haws hit a few big shots. The Cougars, though, lost the lead again, and despite a Fischer three were down two with 1:20 left.