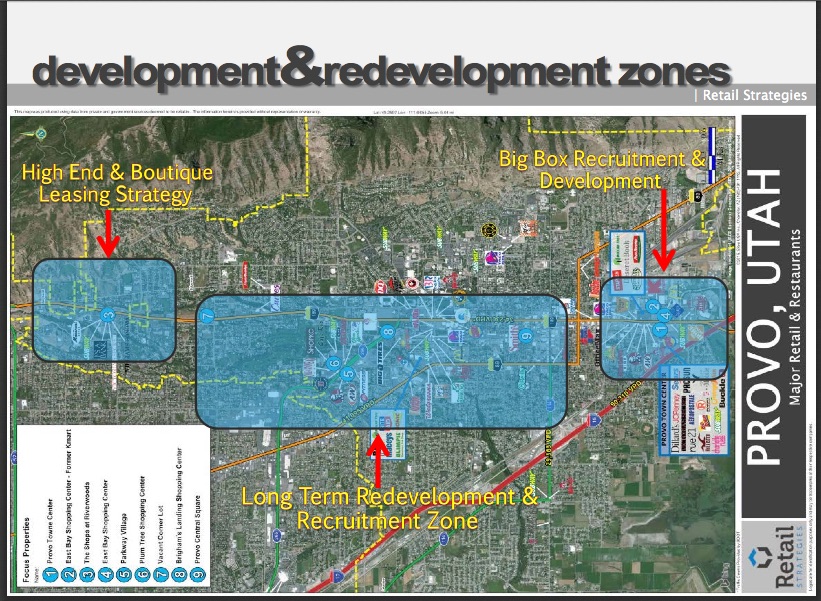 With the closing of big box stores like Kmart and Shopko and the mostly empty East Bay Shopping Center, Provo officials and residents have retail on the mind.

About a month and a half ago, Retail Strategies started working with Provo to bring more and better retail to the city, and help existing retailers expand their offerings and services by giving them data on what consumers are buying and want. Retail Strategies, which consults with cities around the country, is focused in Provo on market research and providing retail opportunities for the city.

The consultants have found huge gaps between what consumers in a 10-minute drive time in and around Provo are spending, and the revenue generated by retailers in the same area. Translation: People in and near Provo are traveling farther to spend money. The annual gap in supermarket spending is more than $53 million; in pharmacies and drug stores it’s more than $27.5 million; and for restaurants it’s $24.67 million. 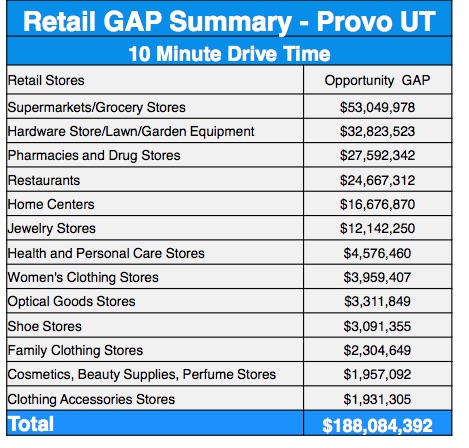 This chart explains the money Provo is losing from residents driving just 10 minutes away for shopping.

And they’ve identified zones in the city for certain types of retailers — the north end is good for high-end stores and boutiques, the middle for long-term redevelopment and the south end for big box retailers.

Chuck Branch, co-founder of Retail Strategies, told the Provo Municipal Council this week that the city needs to work with retailers who may object to Provo because they already have locations in Orem or Salt Lake City. City officials also should contact developers of projects that stalled during the Great Recession and find out if there’s another location or store concept that would work.

“A lot of concepts are looking for second-generation space,” he said. “Some of those, we think, would be interested in Provo.”

For example, Target planned to open a Super Target on the south end of town at one point but the economy killed that project. Now Target is focusing on its urban stores (smaller, two-story versions) rather than its Super Centers, Branch said.

There are five Targets in the metro Birmingham, Alabama area, “clearly this market can handle another Target,” he said.

Branch said pets and sporting goods offer a huge opportunity for Provo. In the U.S., consumers spend $58 million annually on pet products. And Branch thinks the market can handle another sporting goods store, and Dick’s — like Target — has a smaller concept store.

And as for downtown Provo, the city should focus on chef-driven restaurants and even a boutique hotel, he said. Councilwoman Kim Santiago said she wondered if a high-end national steakhouse chain would be willing to open downtown — “You see those in downtowns and it really adds to the class.”

Branch said the city needs more hotel rooms downtown before a high-end steakhouse would consider it. But smaller chef-driven steakhouse chain might be interested.

He told the council that retail development won’t happen overnight, but Provo has a lot to offer to retailers, including $8 million per month in discretionary spending by college students that doesn’t show up in spending statistics.

“You’ve got great opportunities,” he said. “You can replace shut-down retailers with high and better-use retailers.”