7 fun facts about the Female Relief Society of Nauvoo 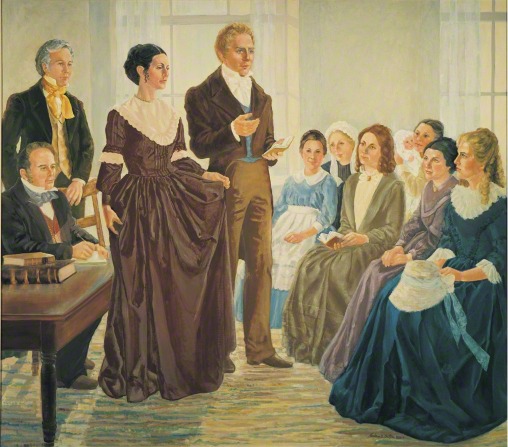 Relief Society, The Church of Jesus Christ of Latter-day Saints’ organization for women, began in Nauvoo after the women sought Joseph Smith’s approval to organize themselves into a women’s organization similar to others of the day. Joseph Smith said God had something better in mind.

Today, more than 5.5 million women in 170 countries claim membership in Relief Society, which is one of the world’s oldest and largest organization for women. To celebrate Relief Society’s 173rd birthday and the General Women’s Session on Saturday, here are seven interesting facts about the Female Relief Society of Nauvoo.

1. It began as a sewing society

The women of Nauvoo first sought to organize themselves when they observed that the men who were working on the Nauvoo Temple needed provisions. Sarah M. Kimball and Margaret Cook discussed the matter and decided to organize a sewing society to “aid in the erection of the temple.”

About a dozen women arrived to participate in the society. They established a constitution and bylaws, which they then presented to Joseph Smith. He replied that they were “the best he had ever seen. ‘But,’ he said, ‘this is not what you want. Tell the sisters their offering is accepted of the Lord, and he has something better for them than a written constitution. I invite them all to meet with me and a few of the brethren … next Thursday afternoon, and I will organize the women under the priesthood after the pattern of the priesthood.'”

2. 27 women were initially admitted as members

Eliza R. Snow took notes in the first meetings of the Relief Society. Her notes are now known as the Nauvoo Relief Society Minute Book and are available online as part of the Joseph Smith Papers collection.

At the first meeting of the Relief Society on March 17, 1842, 27 women (listed below) were admitted as members. By August of that year, membership reached more than 1,100.

Today, Relief Society presidents are called and set apart by priesthood leaders. But at the first meeting of the Relief Society, the women present nominated and voted on the election of Emma Smith as “presidentess,” as Snow recorded:

“Motioned by Sister Whitney and seconded by Sister Packard that Mrs. Emma Smith be chosen President— passed unanimously— Mov’d by Prest. Smith, that Mrs. Smith proceed to choose her Counsellors, that they may be ordain’d to preside over this Society, in taking care of the poor— administering to their wants, and attending to the various affairs of this Institution. The Presidentess Elect, then made choice of Mrs. Sarah M. Cleveland and Mrs. Elizabeth Ann Whitney for Counsellors—”

4. It was almost called “The Nauvoo Female Benevolent Society”

At that first meeting of the Relief Society, Elder John Taylor proposed that the name of the society be changed from “Relief Society” to “Benevolent Society.” Arguments in favor of the change included the points that “Benevolent is a popular  term— and the term Relief is not known among  popular Societies—Relief is more extended in its signification than Benevolent and might extend to the liberation of the culprit— and might be wrongly construed by our enemies to say that the Society was to relieve criminals from punishment &c. &c— to  relieve a murderer, which would not be a benevolent act—”

Emma Smith then argued that “the popularity of the word benevolent is one great objection— no person can think of the word as associated with public Institutions, without thinking of the Washingtonian Benevolent Society which was one of the most corrupt Institutions of the day— do not wish to have it call’d after other Societies in the world— … [W]e are going to do something extraordinary— when a boat is stuck on the rapids with a multitude of Mormons on board we shall consider that a loud call for relief— we expect extraordinary occasions and pressing calls.”

Elder Taylor then “concede[d] the point” and agreed that “Relief” would be best.

5. The first donation to the Society was $5, given by Joseph Smith

For many years, members of the Relief Society paid dues to keep the organization running. The first donation recorded in The Nauvoo Relief Society Minute Book was given by Joseph Smith. He “offered $5.00 in gold piece to commence the funds of the Institution.”

6. Lucy Mack Smith wept for joy at her first meeting

Lucky Mack Smith was apparently not present at the first meeting of the Relief Society, but she became a member shortly thereafter. As she entered the room and saw the sisters gathered, she wept for joy.

She then told the women that “this Institution  is a good one— we must watch over ourselves — that [she] came into the church of Jesus Christ of Latter-day Saints, to do good— to get good, and to get into the celestial kingdom.” She said we must cherish one another, watch over one another, comfort one another and gain instruction, that we may all sit down in heaven together.

7. Joseph Smith taught in many of their meetings

Meetings of The Female Relief Society of Nauvoo included time for receiving instruction. The Prophet Joseph Smith taught in six of those meetings. His teachings in these meetings guided the work of the Relief Society and still have great influence in the Church today.