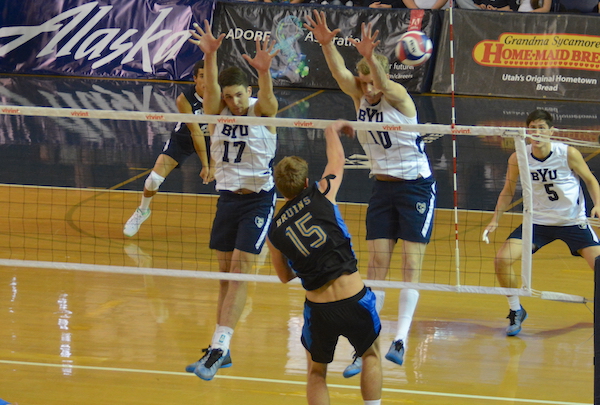 Joseph Grosh (17) and Jake Langlois (10) attempt to block a kill during a game this season. (Photo by Rebecca Lane)

The Cougars no longer have the ability to let the ball fall into the hands of superstar Taylor Sander. The superstar’s tenure as an outside setter on BYU’s volleyball team spiked the Cougars to new heights and into the national spotlight.

But the luxury of relying on the sure-handed Sander is a distant memory, as the Cougars (13–7, 10–6 Mountain Pacific Sports Federation) battle late in the 2015 MPSF season in hopes of reaching the national tournament and a chance at renewed volleyball glory.

This year’s team is built without a superstar, and though head coach Chris McGown has had to deal with multiple injuries to his players, none more important than to Josue Rivera, it’s made the team more united and forced everyone to step up.

“I think that certainly we’ve been somewhat predictable over the last three seasons with Taylor,” McGown said following the Cougars’ win over Cal Baptist on Feb. 6. “It’s nice that we can distribute the ball around a little bit and have different players on different nights step up. We can go to those guys and have them play well.”

[pullquote]”It’s nice that we can distribute the ball around a little bit and have different players on different nights step up. We can go to those guys and have them play well.” —Chris McGown, BYU head volleyball coach[/pullquote]

It seems that a different player steps up each night, even in losses.

In the Cougars two losses at No. 4 Pepperdine last week, it wasn’t a lack of effort from guys not normally in the spotlight that did the Cougars in. Junior opposite hitter Carson Heninger had the match of his season, tallying 10 kills and nine digs in the the second of two matches at the Waves last weekend. And this isn’t an anomaly, either, as players like Josh Grosh and Matt Underwood step up nightly and perform well.

For senior outside hitter Josue Rivera, who missed time to start the season due to a nagging leg injury, it’s a matter of trust in the team that drives the Cougar’s season with the void of superstar talent.

“Guys from the bench will come in and you’ll be like, ‘ woah, anyone can play and anyone can step up,'” Rivera said after his first match of the year, a home win against Cal Baptist. “It’s great to have a deep bench and guys that can play hard.”

In 2014, Sander pushed the Cougars as tournament time drew near. However, without a standout player, the Cougars aren’t worried about the new dimensions of this team as they go into the last month of regular season games. The changing team dynamic should work in the Cougars’ favor this year, pending a late season push to rise in the standings.

“We always miss Taylor, I even miss playing with Taylor,” River said, “but any guy can come in and he’s going to have your back. Everyone’s supporting each other, and that’s good.”

The Cougars next big challenge is not for the faint of heart; a meeting with No. 5 UC Irvine (18–4, 12–3) at home in the Smith Fieldhouse Friday (7 p.m.) and Saturday (8 p.m.). BYU leads the all-time series 43–14, including 22–4 at home. Last year the Cougars won the season series against the Anteaters, handling them easily for a sweep at home, and winning a thrilling five-set match on the road. But that was with Sander, and this year and this late in the season, every set is important. And every player is important on a talent-balanced team, which is why McGown teaches his players to be ready for when their time comes up.

“Be ready, and be ready because you’ve prepared to be ready everyday in practice,” McGown said. “Be ready to be great on the weekend by being great in practice. Your chance might come.”