12 reasons to love the wives of the Twelve 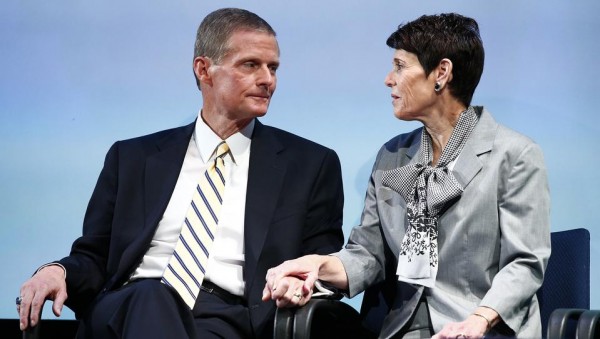 Elder David A. Bednar of the Quorum of the Twelve Apostles and his wife Susan at Brigham Young University Education Week in Provo. (Photo courtesy Mormon Newsroom)

The men seated on the front row of the stand at General Conference are well-known to most members of The Church of Jesus Christ of Latter-day Saints. But their wives—who also sit on the stand during General Conference, just off to the side—might not be so familiar.

As a mother of 10, Donna Smith Packer probably didn’t have much time for hobbies in her younger days. But now that her children are grown, Sister Packer has pursued her avid interest in family history with vigor.

Sister Packer was presented with a Family History Certificate from Brigham Young University in June 2012. She earned the certificate by taking home study courses and classes at the BYU Salt Lake Center.

Elder L. Tom Perry was married to Virginia Clare Lee Perry for 27 years before she died in 1974—the same year he was called to the Quorum of the Twelve. He married Barbara Dayton two years later in 1976.

Barbara Dayton Perry worked as a hospital nurse in several different positions and also taught nursing at BYU before she married Elder Perry.

Like Elder Perry, Elder Russell M. Nelson was a widower when he met and married his current wife, Wendy L. Watson. He was first married to Dantzel White Nelson, who died in 2005. They had 10 children.

Elder Oaks’ daughter Jenny Oaks Baker said that at Kristen’s bridal shower, she gave Jenny and each of her sisters a porcelain red rose as a memento of their mother. The gift was meant to show her new step-daughters that she honored their mother’s life and memory.

When Elder Ballard and his wife were dating, Barbara didn’t have the same feelings for him that he did for her. While Elder Ballard was convinced from the beginning that Barbara was the woman he wanted to marry, she wasn’t sure. Elder Ballard once said, “She was not only beautiful, but had a sparkling personality. I knew from the beginning that I wanted to marry her, but she didn’t share the same feelings. It was a little hard convincing her. I kid her now that getting her to agree to marry me was the greatest sales job I ever did.”

Elder Richard G. Scott is the only member of the current Quorum of the Twelve apostles to be widowed and never remarry. Jeanene Watkins Scott died in 1995 but continues to inspire Elder Scott today, as he has said frequently and publicly.

Jeanene was active in church and civic affairs. She served as president of the Senate Daughters in Washington, D.C., and as president of the American School Board in Cordoba, Argentina. As a young woman, she never planned to marry a young man who hadn’t served a mission. This inspired Elder Scott to serve, and she did the same. They were married in the Manti Utah Temple after they both returned from their missions.

Mary Crandall Hales is fearless and tenacious, as demonstrated by her reaction when their young family moved to Germany. Elder Hales had to fly to Berlin from their new home in Frankfurt shortly after their arrival. But her husband’s absence didn’t faze Mary, who was alone with their two young sons. As Elder Hales remembers, “Mary got the boys into school, learned to find her way around the busy autobahn, and eventually learned to speak German. This was typical. She has always made it work.”

Patricia Terry Holland—whom her husband once referred to as “the breathtakingly perfect Patricia Terry”—studied at three different colleges after graduating from high school, including the Juilliard School. She was called to the Young Women general presidency in 1984, when her oldest child was 18 and while her husband served as president of Brigham Young University, which was an hour’s drive from Church offices in Salt Lake City. Fittingly, she later wrote about responding to chaos in a book, titled A Quiet Heart.

Susan Kae Robinson was an accomplished pianist in her youth, driving several miles for lessons in Rexburg or Idaho Falls, Idaho, from her native Star Valley, Wyoming. She participated in several competitions during that time and later taught piano lessons as an adult.

Elder and Sister Bednar met at a BYU football game they attended for family home evening. As Sister Bednar says, “He threw a pass and I caught it.”

Elder Quentin L. Cook first learned of Mary Gaddie at a 7th-grade talent assembly. He was amazed by her performance of “On the Sunny Side of the Street.” Later, in junior high, Elder Cook was student body president and she was vice president. In high school, they were on the debate team together.

Like the Bednars, Elder and Sister Christofferson met at a BYU football game. She was dancing as a Cougarette, and he was helping with crowd control.

When Kathy her husband were newlyweds on a tight budget, she once made a scrapbook of his life up to that point as a Christmas gift to him.

Kathy Sue Williams first met Neil L. Andersen while he was campaigning for student body office. She was impressed by him—she has said that she “thought he was the most remarkable man [she] had ever met.” Their first date was on her birthday.