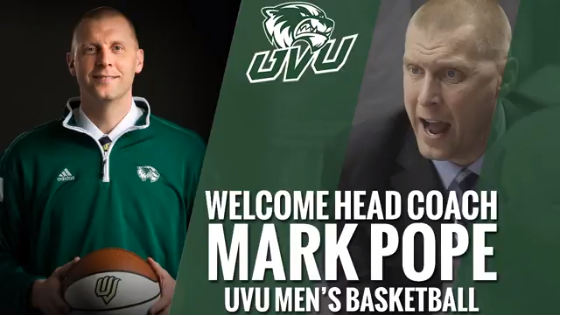 “I could not be more excited to be the next head coach at Utah Valley University,” Pope said. “This is going to be  very special time and very special run.”

Pope leaves a BYU team that finished the 2014–15 season hot before taking a hard loss to Ole Miss in the NCAA Tournament. Seniors dominated this year’s BYU team, and that’s what Pope inherit’s with the Wolverines.

“This group is going to be really special,” Pope said. “It’s a senior laden team, and seniors are that great word — they’re magical. We’re going to make this a great run as we begin this process.”

[pullquote]”We’re going to play fast, furious and free. It’s a hard way to play, but when you get there, it’s the best way to play in the world.” —Mark Pope, UVU’s new head basketball coach[/pullquote]

Pope plans to coach the Wolverines in a similar style that BYU head coach Dave Rose prepares his player in the West Coast Conference.

“We’re going to play fast, furious and free,” he said. “It’s a hard way to play, but when you get there, it’s the best way to play in the world.”

Pope played high school basketball in Washington State at Newport High School in Bellevue, Washington. He went on to play two seasons at the University of Washington before transferring to Kentucky, making the Elite Eight his junior year and winning an NCAA Tournament Title his senior year as a team captain (1996).

Prior to joining Rose’s staff in 2011, Pope was an assistant coach at Wake Forest for the 2010–11 season, and incidentally helped bring junior guard Chase Fischer aboard. Before that he was director of basketball operations at Georgia (2009–11).

Pope is in the middle of assembling a coaching staff, and confirmed in the conference that he’s already brought aboard one member of his team, though he wasn’t able to give a name.

Watch the press conference below.