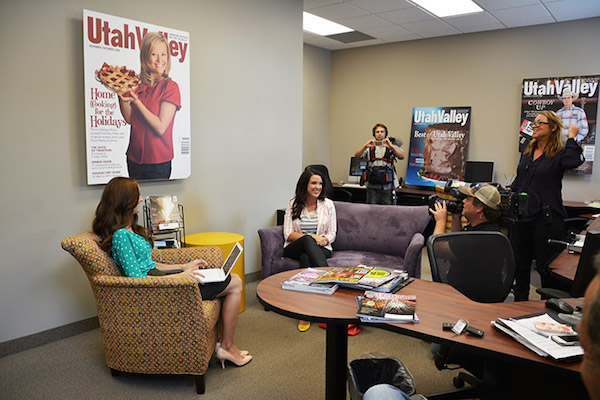 Kim Christenson, a UtahValley360.com and Utah Valley Magazine writer, interviews McKenzie Deakins, a Utah Valley photographer, at Bennett Communications while filming an episode of “House Hunters.” Ironically, the film crew had to create an interview space in our advertising room, which meant taking furniture from different parts of the office.

“House Hunters” is the top show on HGTV. My husband and I discovered it last year when we were looking to buy our first home and thought it was fun to watch other people going through the same process.

We decided on a whim to apply for the show, and we were excited and surprised when the producer said they wanted to tell our story. Filming our episode and sharing the ups and downs of buying our first home in Utah Valley was a positive, exciting experience that we’ll always be glad we were a part of. Our episode airs Wednesday, April 1 at 8 p.m. and 11 p.m., depending on your provider. Here are a few fun facts we learned about the process of being on an episode of “House Hunters” as we filmed:

“House Hunters” gets about 100-200 applications a week depending on the time of year. “House Hunters” director Susan Hull said they are always looking for people who are quirky or who want unique things in their house. They look for drama and conflict and ultimately want people the viewers will fall in love with. We applied for “House Hunters” by first filling out an online application. We got an email from the casting director expressing interest in our story, which was followed up with some more things to fill out and then a phone interview with the producer. After the phone interview and more paperwork, we submitted a 10-minute audition video. After a few weeks of waiting, “House Hunters” told us we were chosen to be on the show.

When we arrived at our first shooting location, we met our director, Susan Hull, who flew in from Los Angeles; the cameraman, from Colorado; and our “sound guy,” Gerald Hartley, from Pleasant Grove, who has met his share of stars and has worked on some of Utah’s biggest projects. We thought it was cool that “House Hunters” combined with local professionals to create the show.

Our director has been at “House Hunters” longer than any of the others  — 10 years. “House Hunters” has been airing for 15. She says every director adds a little bit of his or her own spin to the show. We felt lucky to have someone so seasoned directing us through our first reality TV experience.

4. It takes a lot of filming hours for just minutes of production.

We spent about six hours at each of the three houses where we filmed. We were also filmed doing activities our family enjoys (like eating dinner at Malawi’s, playing with our kids at Provo Beach, running on the Provo Canyon trail) and they filmed me working (at Bennett Communications, of course, and teaching Yoga at BYU). We filmed for more than 30 hours total, and the episode is only 23 minutes long. 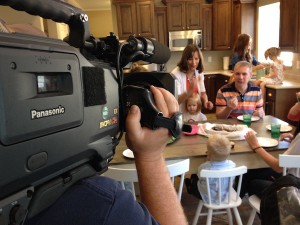 “This was the final scene we filmed,” Christenson said. “This is the scene at the end of our episode where ‘House Hunters’ shows us enjoying our new home with our family and friends.”

They just hit their 10,000th episode mark. That means they’re busy filming all around the country all year round.

And because you’re probably wondering, they paid our family $500 to participate. The realtors work on a volunteer basis.

Thank goodness, because I can certainly get hangry, and that doesn’t go over too well on TV. The director treated us to lunch each of the five days we were on set, took my family to dinner one night and provided us with on-set snacks every day. We missed that pampered treatment after it was all over.

8. “House Hunters” has filmed in every state.

There hasn’t been a U.S. state where the crew hasn’t filmed an episode (or 2 or 200). “House Hunters International” is a separate production company.

9. Very few episodes never make it to the air.

Our director said she only knows of about 10 episodes that never aired, and that was due to things like death, divorce and Hurricane Katrina.

10. It’s scary to think of millions of people watching you on national television.

After all those hours of filming, there were certainly awkward moments and bloopers. We’re dying to see what ended up in the episode and I can’t help wondering if there was something in my teeth, a booger on my face or if I said something idiotic that the world will hear me say. After waiting for six months (it generally takes 4-6 months after filming for an episode to air), we are excited and a little nervous to see how it all turned out.