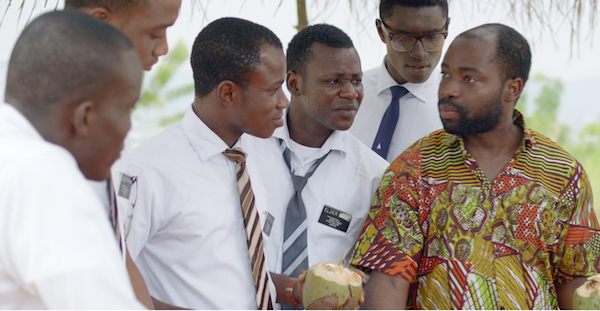 The first two times Marcus Menti saw “Freetown,” a religious thriller about missionaries trying to escape the unrest of the Liberian Civil War, he couldn’t stay for the whole movie.

As Menti saw the fights and felt the intensity of the missionaries trying to escape the civil unrest, the stress of the situation and disturbing memories flooded back to him. The memories because Menti was one of those missionaries.

“The images are revived and refreshed in my mind, so this is the first time I’ve never had to leave the theater as this movie was being played,” Menti said. “This is the third time I’ve seen it. I think as time goes on I will feel strong to relive those images. It’s been a faithful and enduring exercise.”

Menti currently lives in Magna, Utah, but the things he wrote in letters to his mission president in 1990 have had him reliving past events. In 1990, Menti was one of the zone leaders (a missionary leader in charge of other missionaries in a specific area) serving in Monrovia, Liberia.

“I remember one of those nights we were asked individually to give accounts of what our experiences were as we journeyed,” Menti said. “And I remember writing down in a journal everything that had happened. All of those things were collated or compiled and sent to the LDS Church headquarters.”

Menti didn’t know that someday his and his fellow missionaries’ story would be made into a movie, but he knew the story would eventually be shared. Which is exactly what happened when Director Garrett Batty discovered a write-up about the missionaries on lds.org. The bibliography led him to the letters written by the missionaries to their mission president.

“As a filmmaker, I’m drawn to stories that I think draw from the human experience and this story certainly jumped out,” Batty said. “It was interesting to me because I had never been to Africa. I don’t relate to anybody in these types of circumstances. And yet, as I read their letters, I could very much relate to the emotions that they went through.”

“Freetown,” which is based on a true story about Menti and his fellow missionaries, follows six Liberian-born missionaries serving in Monrovia, Liberia during the 1990 Liberian Civil War. One African tribe is determined to eliminate members of the Krahn tribe, which one of the young missionaries belongs to. As persecution escalates and the missionaries are faced with attacks, the missionaries decide they must leave Liberia and escape to safety. The road, however, is not clear as the missionaries have to make it through rebel fighters on a 30-hour road trip to reach their final destination — Freetown, Sierra Leone.

Filming “Freetown” was a new challenge for Batty. His previous film, “The Saratov Approach,” had been something he had planned on making for years; he spent hours talking to the real-life elders who had been kidnapped and filmed the indoor scenes in the very familiar production office in Draper, Utah. However, this time around it was a new story, filmed in a place he and Producer Adam Abel (best known for producing “Saints and Soldiers”) had never been before, created new challenges for the pair.

People shouldn’t believe that the movies are the same, Batty warns. Batty, who also directed “The Saratov Approach,” joked with Abel that he has created a new genre of movies, M.I.P. (missionaries in peril).

“I’m glad that they are two very different films,” Batty said. “Aside from two missionaries in peril, they are completely different films, which I’m excited about. I was concerned that ‘Oh, here’s this guy that makes missionary peril movies,’ but I think that ‘Saratov Approach’ stands alone as a film and ‘Freetown’ is a very, very different experience for the audience.”

And it was all accomplished with a new crowd too. All of the actors in the film were from Ghana except for one person who also worked on the crew. Outside of the five people who flew from Utah, the crew was entirely made up of local professionals.

[pullquote]“It’s difficult to make independent films anywhere, but then if you complicate it with an area that you are completely unfamiliar with, it just elevates the complication. What our crew, and certainly our cast may have lacked in experience, they certainly made up with a passion and attitude of just wanting to make the story work and do justice to the story because it is a remarkable story.” —Adam Abel, Producer of “Freetown”[/pullquote]

“It’s difficult to make independent films anywhere, but then if you complicate it with an area that you are completely unfamiliar with, it just elevates the complication,” Abel said. “What our crew, and certainly our cast may have lacked in experience, they certainly made up with a passion and attitude of just wanting to make the story work and do justice to the story because it is a remarkable story.”

While the film is directed and produced by two Mormons about Mormon missionaries, both Abel and Batty believe the story will resonate with anyone.

“I hope they are like me,” Abel said. “I want to go to a movie to be entertained, first and foremost. And then certainly within the context of entertainment, if it is something that can inspire and motivate me to be better or see something in a different light that will influence me or others — there are those takeaways from ‘Freetown.’”

“Freetown” opened in Africa in March and was accepted into the Pan African Film Festival. Abel and Batty returned to Oyibi, where they filmed parts of the film, to share the movie. Over 200 villagers came to watch the film projected onto a 12-foot screen.

“We were certainly aware that many of the areas where we filmed, they didn’t have movie theaters there and most likely hadn’t ever seen a movie before, so we thought it would be great to … project it in one of the little villages we filmed it in,” Batty said. “It was pretty quiet during the movie, but the minute that their village showed up they were screaming and yelling and saying, ‘That’s his house.’”

“Freetown” opens in select theaters in the U.S. on Wednesday, April 8. Find a theater near you here.

The process of seeing his history come to the big screen hasn’t been entirely an emotional walk down memory lane — Menti says his spiritual strength has been lifted and good memories have returned too.

“I remember people telling me I was the missionary who brought smiles and was affable, and I saw that in him (the actor who portrayed Menti),” Menti said.

However, it is the scripture strategically placed on the back of the tiny Toyota Corolla used as the missionaries’ escape vehicle that sums up the message of “Freetown,” “…I believe; help thou mine unbelief” (Mark 9:24).