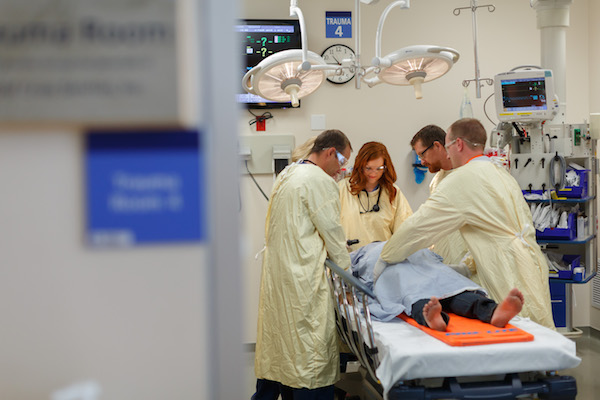 As a high school senior, Heidi Baker lost both kidneys. Her mother and brother donated kidneys, but she lost those as well. After Baker had been on the list again for several years, her sister, who is eight years younger, was old enough and decided to be tested.

“With each transplant, her tissue type changed slightly because of the donor kidney,” said Hillory Hippen of Salt Lake City. “So the fact that mine was a perfect match when it was the third match was unusual, and we considered it a miracle.”

Hippen said it was painful, but it was worth it to wake up and see her kidney immediately helping her sister.

“Her color was already better and because my kidney was working, she already looked healthier,” Hippen said. “I wouldn’t change it for the world. It’s what you do for family.”

Ten years later, Baker is back on dialysis and on the list again, along with more than 123,300 people in the United States waiting for an organ transplant. About 800 of them live in Utah, according to Intermountain Donor Services, which serves Utah and parts of Idaho and Wyoming.

According to UNOS, the United Network for Organ Sharing, another person is added to the wait list every ten minutes in the United States, and an average of 21 people die every day while waiting for a transplant.

“Only a small percentage of individuals will ever have the opportunity to donate an organ,” said Curt Lester, a registered nurse and manager of the Neuro-Shock-Trauma Intensive Care Unit at Utah Valley Regional.

The tricky part is only 1 to 2 percent of deaths meet the criteria for organ donation. For the most part, organ donation is only possible after brain death and sometimes after cardiac death. This makes viable organ donors rare.

“Most people still have the option to donate their tissue and their eyes, but to actually donate your organs, you have to be considered brain dead or pass away within a certain period of time,” Lester said.

Even though a person may want to be a donor and even mark it on a driver’s license, the wishes of family or a power of attorney can supersede that. Lester said it’s important people tell their wishes to their family beforehand, so decisions can be made more easily during emotional times.

Ashley Askwig Irvin said she’ll be forever grateful to the families who donated something “so very special” to her last month — their loved one’s heart.

[pullquote]“I feel for their loss. I’ve written to the donor families that I’m so very grateful for the second chance of life. I’m just thrilled to be able to have a heart that functions well and is able to handle my own body rather than be like an 80-year-old in a 25-year-old young lady.” —Ashley Askwig Irvin, Heart transplant recipient[/pullquote]

“I feel for their loss. I’ve written to the donor families that I’m so very grateful for the second chance of life,” Irvin said. “I’m just thrilled to be able to have a heart that functions well and is able to handle my own body rather than be like an 80-year-old in a 25-year-old young lady.”

In 2009, Irvin was diagnosed with idiopathic dilated cardiomyopathy, which dealt a devastating blow to her collegiate soccer career. Through years of dealing with heart disease and suffering a stroke at the age of 23, Irvin kept a positive attitude and finally received a heart in March. After complications with the first one, she miraculously received a second heart.

“I want to start working again and just get back to boring old life rather than hospitals and nurses and doctors and needles and pain and weakness,” Irvin said. “I just can’t wait to go run a half marathon … and just be able to do things on my own rather than with help from people or machines.”

Irvin said she just doesn’t get why people wouldn’t want to give to somebody “in dying need.”

With only a one-in-a-thousand chance, Lindsay Duerden of Orem matched and donated a kidney to her cousin Amy’s husband, Cham Sok. Duerden and Sok just celebrated what they call their third “kidney-versary” at the end of March. The Soks now have a little girl who shares the middle name Jade with Duerden.

“I get to see (the life) he couldn’t have had otherwise,” she said. “They might not have been able to have the opportunity to have a kid because they had medical bills and Cham was on dialysis every day and it would’ve been more difficult. I’m just glad Cham can be a normal dad.”

Duerden decided to donate because she was wanted to pay it forward.

“I was adopted and my whole life I’ve felt blessed to be taken out of a difficult experience and to be loved and nurtured,” Duerden said. “I felt incredibly grateful for the opportunity to make someone else’s life better because I have been so blessed.”