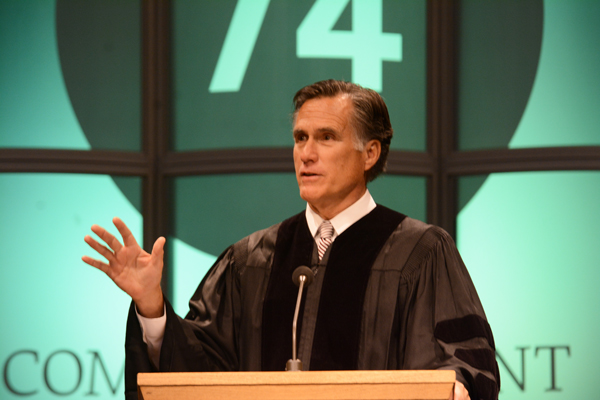 As the 5,341 UVU graduates celebrated the end of an era as college students, Romney discussed the unknown of their futures and encouraged them not to retreat into the world’s they knew as children, but instead to continue to move forward.

“The cozy little world of your childhood is long gone. You may be tempted to try to create for yourself that same kind of small and safe circle,” Romney said. “… Alternatively, you can live large by expanding your world and engaging in your world, constantly learning, nourishing friendships, overcoming reversals, and serving others. That is the road less traveled, and it will make all the difference.”

Before receiving an honorary degree from UVU along with the late Becky Lockhart and Pamela Atkinson, Romney shared six dimensions to “live a large life” and avoid defaulting to the smaller life from their childhood.

When Romney was in college, he said he focused on the classes and assumed he would never see his study group after graduation. Contradictorily, Romney says his six-person study group continues to get together 40 years later to celebrate their success and console each other in their lows.

“Your life will be larger if you value and nourish friendships, friends here at UVU, from your home and from the growing circle of your life,” Romney said.

2. Get married and have children

“I’m surely not going to tell you when to tie the knot. You’ve got parents who will do that,” Romney joked. “But I will tell you that marriage has been the single most rewarding part of my life, by far. Marriage involves passion, conflict, emotion, fear, hope, compromise, understanding — in short, it is living to the max.”

Romney credits his five sons and family for bringing him “immeasurable happiness” throughout the years.

This 9-to-5 workday, alarm clock driven lifestyle doesn’t need to be something to dread, Romney says, but instead it is part of the equation that makes a person happy.

“Don’t waste time bemoaning your job. Don’t skim by with the minimum of effort. Dive in. Get more from your job than the paycheck. Hard work is living large.”

Romney referred to what he and his wife, Ann, call people’s “bag of rocks,” or the challenges in an individual’s life that you might not always see. As a leader in his church, Romney learned that each person has their own challenges, visible or not. He assured graduates that bad things will happen.

[pullquote]”The real wealth in life is in your friendships, your marriage, your children, what you have learned in your work, what you have overcome, your relationship with God and in what you have contributed to others.” —Mitt Romney, Former Massachusetts Governor[/pullquote]

“Engaging in your world means accepting that hurt, confronting it and endeavoring to ascend above it so that you can keep pursuing a fulfilling and abundant life,” Romney advised.

5. Know you will fail

“Failures aren’t fun, but they are inevitable,” Romney said. “More importantly, failures don’t have to define who you are.”

Romney reflected on past failures, even joking, in case the audience hadn’t heard, that he had lost to President Barack Obama in the 2012 U.S. presidential election. Life won’t go as expected, Romney explained.

“Life has way too much chance and luck and serendipity — good and bad — to be assured that kind of success,” Romney said. “And if your life is lived for money and position, it will be a shallow and unfulfilling journey.

“The real wealth in life is in your friendships, your marriage, your children, what you have learned in your work, what you have overcome, your relationship with God and in what you have contributed to others.”

Romney shared stories of people who had devoted their lives to giving back to the community. One example was about Tom Monaghan, who created Domino’s, bought the Detroit Tigers (which won the World Series the following year) and had everything he wanted at his fingertips. However, when Romney asked Monaghan what was the most rewarding part of his life, Monaghan said it was giving more than $1 billion to the Ave Maria University, a college he founded.

“Living life in fullness includes serving others, and doing so without pride or personal gain,” Romney said. “It will fill your heart and expand your mind.”

UVU President Matthew Holland added more advice on happiness from his speech, “As I look out across this massive sea of bright, talented, and now well-trained dynamos, I see waves and waves of future success. Whether that success is great material success or not, I hope you will all remember that happiness is more than property.”