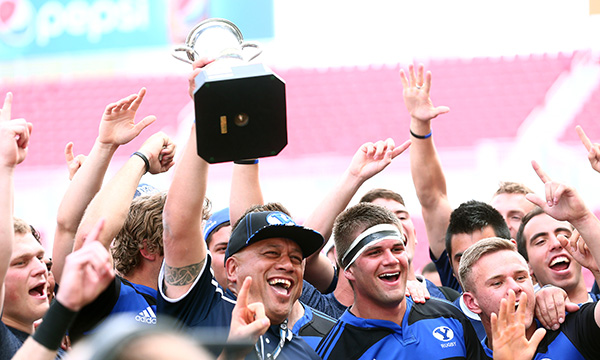 SANDY — Making brilliant plays with his foot is as natural as walking or running for BYU senior Johnny Linehan. And the senior fly-half and New Zealand native saved his best play on the highlight reel for a critical moment when the Cougars were trying to maintain a precarious lead over California.

Midway through the second half, Linehan decided to angle a drop kick around the right side of the uprights. The ball landed in the open arms of Jared Whippy, standing all-alone in the in-goal area.

It was BYU’s only try of the second half, but a critical one that helped the Cougars hold on for a 30–27 victory over California in the Varsity Cup National Championship match at Rio Tinto Stadium on Saturday afternoon.

“We’ve done that so many times in practice,” Linehan said. “It comes off very rarely in the games. I saw we had him out there wide and he called for the kick. I guess I put it on a good spot for Jared. Credit to him for making the play. It was his try. I just put it on the spot there.”

Linehan accounted for eight of 13 second-half points for the Cougars, which is in the 50th season with the rugby team at BYU. He converted a pair of penalty kicks and had a successful conversion after Whipple’s try. 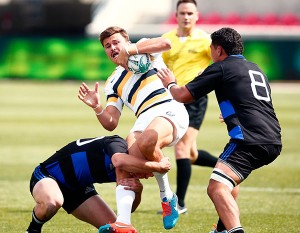 BYU (14–0) earned its fourth straight national championship — a feat matched only by California in college rugby history. The fact that the Cougars reached this milestone against the Bears made it feel even sweeter.

“They were where we wanted to be and our goal was to get there,” BYU coach David Smyth said. “And we’ve done a great job of doing that the last four or five years.”

To obtain national title No. 4, the Cougars had to survive their closest game of the season.

Defensively, BYU shut out three opponents. The Cougars allowed UCLA and Central Washington to combine for just 24 total points in the Varsity Cup quarterfinals and semifinals.

During the first half, it appeared BYU might find a way to put California away early as well. The Cougars flexed their muscles on both sides of the ball early.

Senior center Seki Kofe scooped up a dropped ball by the Bears and raced the other way, sprinting under the uprights for the try. Linehan added a conversion to put BYU up 7–0 in the 9th minute.

Linehan scored again on a penalty kick two minutes later. California finally got on the board in the 15th minute when senior fullback Jake Anderson converted a kick following a BYU penalty to make it 10–3.

The Cougars extended their lead to 17–3 in the 26th minute after a series of pass culminated in Josh Anderson racing down the sideline untouched for the try, followed by Linehan’s conversion.

[pullquote]“My heart skipped a few beats, especially with some of the calls that we didn’t feel were right. But Cal fought straight to the end there and I’m just glad the boys were able to stay strong and do the things we’ve been practicing this week so we could come out with a championship.” —BYU senior lock Dan Hubert[/pullquote]

California could not answer before halftime. The Bears made deep runs into Cougar territory on three different occasions late in the half. BYU’s defense stiffened each time and left the Bears without a try.

“They were tough,” Smyth said. “They probably won the physical battle in some areas, but we didn’t really take many steps backward.”

Momentum shifted after halftime. California scored its first try in the 43rd minute when scrum-half Paul Bosco dived across the line and Anderson tacked on a conversion. Then Anderson broke a pair of tackles for a try, trimming BYU’s lead to 17–15 in the 50th minute. This time, however, Anderson missed the conversion kick.

Clutch play from Linehan pushed the lead back to double digits. He converted a penalty kick and then found Whippy on the drop kick pass to extend BYU’s lead to 27–15 in the 60th minute.

“You don’t normally see a foot pass from the ground,” California coach Jack Clark said. “That was great. We had a crack at that ball but the kid laddered up and made a really nice play.”

Bears hooker Michael Bush scored another try for the Bears a couple of minutes later. But Anderson missed another conversion and Linehan converted another kick to make it 30–20 in the 65th minute.

California had one last chance after center Anthony Salaber eluded a tackler and sprinted in for the try in the 74th minute, and Anderson tacked on a conversion, to cut it to 30–27. BYU’s defense hung on and kept the Bears from getting another scoring chance in the final minutes.

“My heart skipped a few beats, especially with some of the calls that we didn’t feel were right,” said BYU senior lock Dan Hubert. “But Cal fought straight to the end there and I’m just glad the boys were able to stay strong and do the things we’ve been practicing this week so we could come out with a championship.”

BYU is the first college team to win four straight national championships in rugby since California won five straight from 2004 to 2008. The Bears hold the record for most consecutive titles —winning 12 straight from 1991 to 2002.