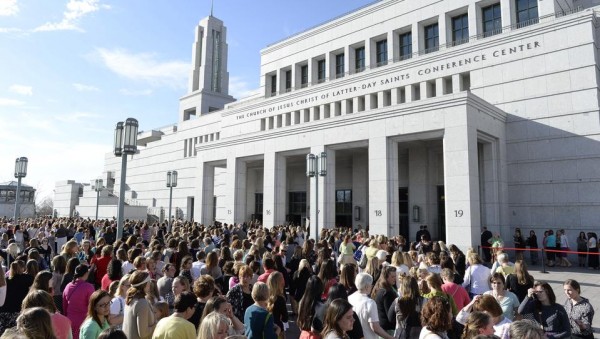 Hundreds of thousands of women, young women and girls gathered around the world on Saturday, March 28, 2015, for the General Women’s Session of the 185th Annual General Conference. (Image courtesy Mormon Newsroom)

In April 2014, The Church of Jesus Christ of Latter-day Saints held the General Women’s Meeting — a combination of the prior Relief Society Meeting and General Young Women’s Meeting, with Primary-aged girls 8 and older also invited — the week prior to general conference.

In October 2014, President Dieter F. Uchtdorf referred to the session as the opening session of general conference, but the meeting’s status remained unclear until the Church affirmed that it would become an official conference session.

In this month’s issue of the Ensign, the women’s session appears at the front of the magazine for the first time, designating it clearly as the first session. Though little about the actual meeting has changed since April 2014, the meeting’s new status has instigated some changes in its treatment. Here are three ways the general women’s session is different from the General Women’s Meeting.

This designation also includes the women’s session in conversations about general conference, including those that take place in Sunday meetings. Topics for quorum and Relief Society meeting lessons taken from general conference may include addresses given in the Women’s Session. To some Church members, the change represents a change in the status of women and their importance in the Church.

2. Its position in general conference transcripts

The May 2015 Ensign, which contains general conference transcripts, has placed the women’s session in the front as the first chronological session of conference. Though the women’s meeting was not an official part of conference prior to October 2014, the session was included in the back of the magazine.

The name also changed on the tickets, in news reports of the meeting, in social media conversations and in official records.