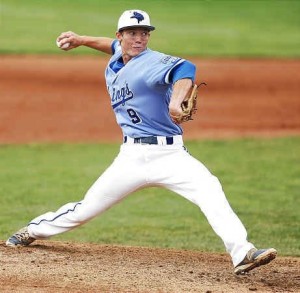 Walker has mastered the little nuances that go into being successful on the mound. He can deal with the mental highs and lows. He understands which pitches work in live game situations. His work ethic is second to none.

“Knowing what I can do and having confidence is a big deal out there on that mound,” Walker said. “There’s not really anything different other than I’m a little bit bigger and a little bit stronger. I know the game a little bit better with my pitching, so I’m not just winging it out there.”

Walker has played a key role in Pleasant Grove’s rise as a Class 5A powerhouse. He made a splash on the mound as a junior when he finished with a 9–0 record. In 72 innings last season, Walker struck out 99 batters and yielded 52 hits while posting a 0.97 ERA.

The BYU-bound senior has done his part to lead the Vikings to success in 2015. He is 6–0 so far and has struck out 67 batters in 42 innings of work.

Pleasant Grove coach Darrin Henry points to Walker’s composure as one of his biggest strengths.

“This is his fourth year as our No. 1,” Henry said. “He’s actually had some rough patches this year, but he just keeps his composure and keeps going. He works his butt off every day.”

Walker doesn’t limit himself to doing damage as a pitcher either. He can also make life miserable for other teams at the plate.

Pleasant Grove has made the most of his contributions. The Vikings opened the season with 15 straight victories and were ranked as high as No. 6 nationally by USA Today before finally dropping a pair of games to Lone Peak last week.

That start has definitely positioned Pleasant Grove among the state title favorites again this season. The Vikings finished second a year ago, losing to Jordan 4–3 in the Class 5A championship game.

Coming so close has made Walker and his teammates hungrier to finish the job this time around.

“It hits me big,” Walker said. “I know what I need to do for this team and what my role is. Every guy is starting to figure that out now and it’s awesome.”

It would offer a fitting exclamation point to his high school career before Walker joins BYU next spring. Walker committed to the Cougars over several schools — including Utah, Stanford, USC and UVU — before his junior season.

BYU won over Walker because the coaches didn’t waste any time in letting him know he was exactly the type of player who fit in the program they are trying to build.

“They came straight after me,” Walker said. “It didn’t matter how old I was. As soon as they could make the offer, they did.”

If Walker’s game translates to the college level as well as it has against high school competition, landing him could be another step forward for BYU in putting its baseball program on the national map again.

Got what it takes to workout with a firefighter? Next post