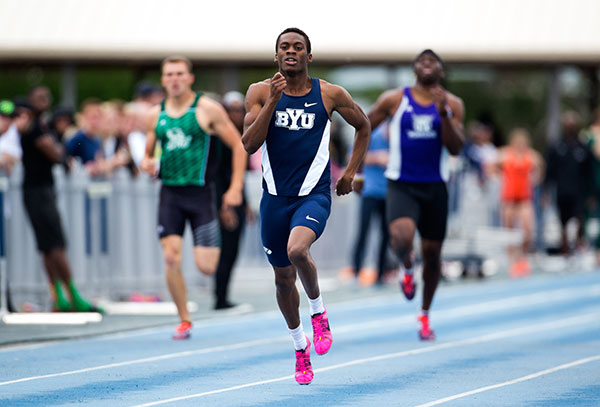 Shaquille Walker broke the BYU track record for the 800 meter with a time of 1:45.78. However, Walker still feels like he isn’t a fast runner. (Photo by BYU Photo)

Sharing the same first name as a former NBA star seems appropriate for Shaquille Walker. In his second season competing for the 16th ranked BYU men’s track team, Walker is growing into the sort of star his name suggests.

Walker quickly made a name for himself earlier this spring when he broke the BYU school record for the fastest time in the men’s 800-meter. He posted a time of one minute and 45.78 seconds at the Sun Angel Classic at Arizona State on April 11. Walker’s mark eclipsed the previous record of 1:46.50 — set by Brazilian Olympian Agberto Guimaraes in 1980 — by nearly a full second.

“It was a perfect race and perfect conditions,” Walker said. “I felt good on the day and it just all came together for a perfect time. A perfect storm.”

Perfect is the right word to describe how this season has unfolded Walker.

Taking two years off from running to serve a mission in Manchester, England for The Church of Jesus Christ of Latter-day Saints did not slow Walker down one bit. If anything, he came back energized and ready to run.

It wasn’t simply a case of maturing physically that has helped him enjoy a breakout sophomore season. Knocking on doors and sharing the gospel for two years made it easier for him to visualize how he could accomplish tough goals. Walker believes he is much stronger mentally than during his freshman season before his mission.

Walker hit the ground running after getting home from his mission. He foreshadowed what he was capable of doing this spring by going undefeated through the indoor track season until the NCAA Indoor Championships. The biggest highlight came when Walker set both a school and meet record in the 800 at the Washington Invitational after crossing the finish line in 1:47.44.

BYU coach Ed Eyestone saw enough promising running from Walker before the indoor track season got underway that he did not consider redshirting him like he does with most returned missionaries.

What really sets Walker apart from the typical 800 meter runner, from Eyestone’s perspective, is his first lap speed. He excels at starting strong and maintaining position.

“He’s got world class leg speed at the 400 level for an 800 meter guy,” Eyestone said. “I’m not saying he would make an Olympic final in the 400, but I am saying he’s darn fast and would be one the faster 800 meter runners out there over 400 meters. And that’s good. Speed is always an asset, never a liability in running.”

Walker was first drawn to BYU while dating an LDS girl in high school back in Savannah, Georgia. He eventually joined the LDS Church himself. Walker checked out BYU on the advice of his girlfriend’s father and flew to Provo for a campus visit. When it came time to decide where to run in college, Walker chose the Cougars over Stanford, Georgia and Georgetown.

Eyestone and Walker bonded over a mutual love of guitar music during the recruiting process. Sometimes, they talked more about playing the guitar than running. But, make no mistake, Eyestone was well aware of the impact Walker could have as a runner — especially after he won two state titles in the 800 meters and posted the sixth fastest 800 time in Georgia state history.

“He definitely showed promise and potential with his times,” Eyestone said.

For all that Walker has accomplished this season, he remains hungry. He wants to compete for a national title at the NCAA Outdoor Championships in June and give himself a shot at being named an All-American. Eventually, his goal is compete in the World University Games.

Setting records will carry a greater weight for Walker once he can pair them with championships.

“I always thought once you get school records, you would feel like, ‘I’m super fast,’” Walker said. “But I notice every time I run a time, I go through the same cycle. I don’t believe I ran the time. The time sounds fast to me. But once I realize I ran that time, that time starts sounding really slow to me and I start feeling like I haven’t accomplished much yet. And in the grand scheme of things, I haven’t. I haven’t won nationals or anything like that. I’ve run a good time, but I’ll hopefully feel better if I do it when it matters most.”