8 Utah Valley artists with pieces in the Payson Utah Temple

Of the 19 original paintings in the Payson Utah Temple, eight are original pieces by Utah Valley artists and additional pieces comes from artists in other western states.

“Typically [the artists] are members of the Church or they’ve done work with us before,” said Elder Kent F. Richards, executive director of the Temple Department and member of the Quorum of the Seventy, in a media tour. “The artwork goes through several levels of review, and ultimately, the First Presidency approves all of the paintings that are in the temple.”

All of the Payson temple artists interviewed by UtahValley360.com said it was a long process before they were officially notified that their piece had made it into the Payson Utah Temple, sometimes taking years from initial introduction to final approval. Most of these artists had to bring multiple options to the table in order to get an idea approved. Then it was detailed work with regular check-ins from the LDS Church’s interior design committee to make sure the art was meeting their guidelines. Finally, the artwork made it on the walls.

Meet the eight Utah Valley artists who have original pieces in the Payson Utah Temple, hear their idea behind the art and find out more exclusive facts. 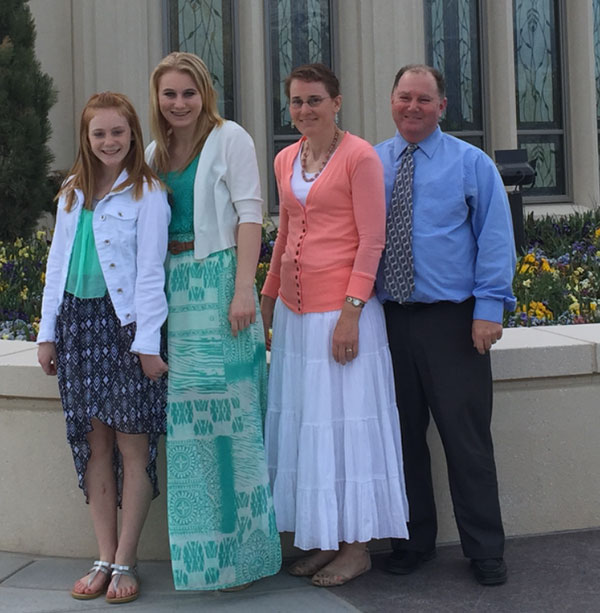 How did you decide what to cross stitch?

Holly Ellis was instructed to find 10 pictures that had a mother and daughter theme. Using Church magazines as a resource, Ellis found 10 pictures and created patterns for all of them before she brought them before the committee. After she received permission from the committee and from the artist, Trent Gudmunson, Ellis spent 2.5 years working on and completing the detailed cross stitch.

“Of the 10, they chose this one. They said it reminded them of the pioneers,” Ellis said.

“It’s meant the world to me,” Ellis said. “While I was working on it, I loved the possibility that I could have something in the Lord’s house and that I was able to do the quality just for Him.”

Interesting Fact: The color palette for the pattern had to be adjusted to eliminate darker colors to match the temple’s guidelines. 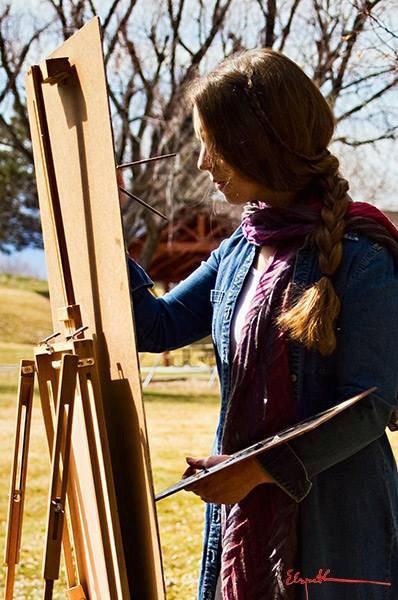 Elspeth Young chose sunflowers for the background of her painting of the Payson pioneers because sunflowers represent the “Trails of Freedom.” “We follow their example, so I thought the sunflowers would be a good symbol of hope,” Young said. (Photo courtesy Elspeth Young)

City: Orem
Paintings: “Blessed, Honored Pioneer” (painting of Lucinda Pace, who founded Payson with her husband) and “And Thou Didst Hear Me” (painting of Jane Elizabeth Manning)
Location in temple: By the Bride’s room and in the sealing waiting room, respectively
Site: alyoung.com

“The first things I did in terms of Payson was look carefully at Payson history and what inspired me,” Elspeth Young said. “Their story completely touched my heart and I just thought that they shouldn’t be forgotten. I am enamored with history; it was amazing to me that I had never thought about who founded Payson and whose legacy we were living the fruits of.”

“It’s exciting to feel like I could use a gift that I’ve been given in order to try to communicate with others visually,” Elspeth Young said. “It’s lovely to feel like there is a little testimony of mine, a little message that will hopefully point people to the Savior and hope.”

Young paints religious art. Some of the projects she is working on are a painting of Pharaoh’s daughter finding baby Moses, an Indiana pioneer and an ethnic painting.

Interesting Fact: Young searched for a model to represent Jane Elizabeth Manning for more than 10 years. She finally found her model who was the granddaughter of the first member of the LDS Church in Ghana. The model for the pioneer painting outside the bride’s room was an actual descendant of a Payson pioneer. 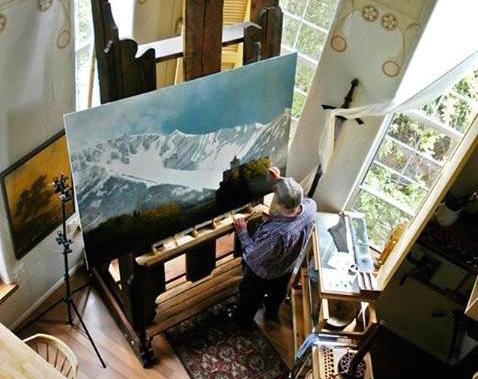 City: Orem
Painting: “The Lord Hath Anointed Me”
Location in temple: Placed in front of the chapel area
Site: alyoung.com

“This arose out of a photo shoot of the model,” Al Young said. “I had no intention of painting this particular composition. I had done the costume and gotten things ready for the shoot. After taking a look at the images in the shoot, this jumped out at me as a subject that wanted to be painted, so to speak. As I embarked on the process of painting it, the thought kept coming that this might be suitable for consideration as a temple painting.”

“There’s a personal component in that there is something rather wonderful about being able to make a contribution to the temple, to the Church, to God,” Young said. “None of those necessarily need my offering, but just to be able to do something like that is an intensely rewarding personal feeling.”

Continuing with religious art, Young is working on a painting of Ammon, a character in the Book of Mormon, using Nebo Canyon as the backdrop. He is also working on a large detailed painting of the city of Jerusalem as it was during the Savior’s mortal ministry amongst other projects.

Interesting Fact: Al Young and Elspeth Young, who are father/daughter, use costume work for their paintings, meaning they create scenes physically, take a picture and then paint what they capture. 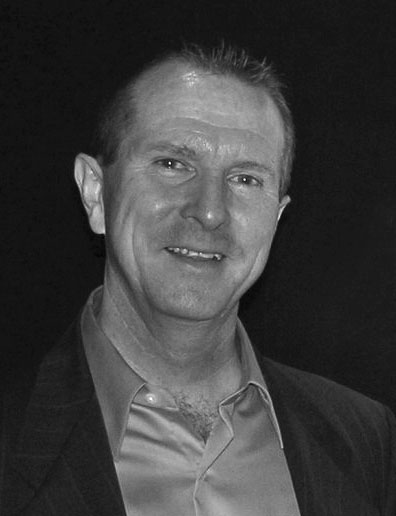 Adair Payne primarily paints forest and outdoor scenes. “I can’t say enough what a humbling and joyful experience it was to do,” Payne said. “I feel really satisfied as an artist now.” (Photo courtesy Adair Payne)

City: Lehi
Painting: “Below the Mighty Peaks”
Location in temple: Next to ordinance room #1
Site: adairpayne.com

“It’s a favorite hike where I often go and photograph,” Payne said about his painting of the waterfall scene. The scene is from Dry Creek in Alpine.

“It’s the greatest honor of my whole creative life,” Payne said. “I’ve been painting since childhood and this is something I’ve never dreamed of doing. I can’t think of a single collection of art that I would rather be part of. I have some paintings in some pretty nice collections, but the painting in the Payson temple close to home is the greatest honor. There is really nothing that compares.”

Interesting Fact: Payne started working on the painting in Janurary 2014 and took 2.5 months to complete the painting. 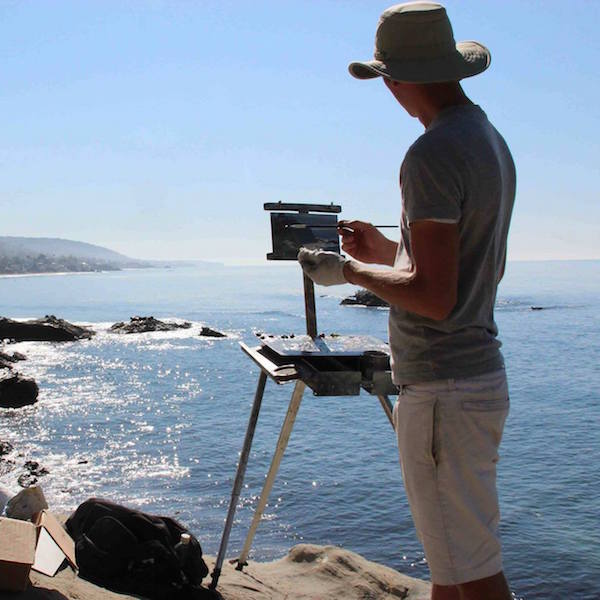 Josh Clare, a Utah County artist, has his first painting in the Payson Utah Temple. “This is the pinnacle,” Clare said. “To have a painting in the temple is enormous. I’m humbled by it.”

Josh Clare painted Mount Loafer because that was the view outside of his parents’ window in Salem. “I knew that the Payson Temple was coming,” Clare said. “I’ve always wanted to submit something, and that was enough to make me actually do it — to have a temple that would be close to my home. It would be my parents’ temple.”

Clare is continuing to improve his technique and work on projects.

Interesting Fact: Clare initially submitted two paintings to the committee. Both were approved, but the other one will be in the Star Valley Wyoming Temple. 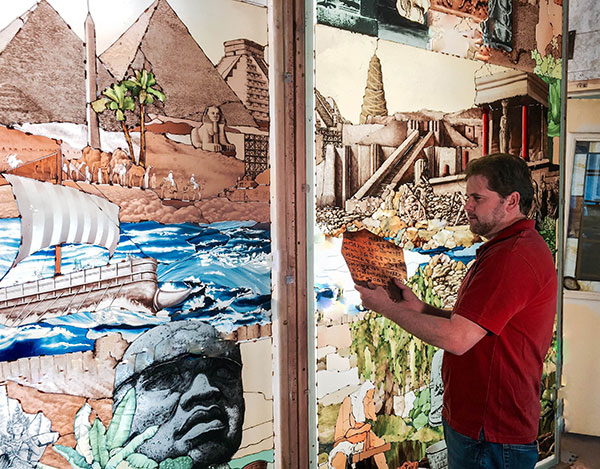 How did you decide what to create?

“When we met with the architects and the interior designer, we had talked about ideas and we wanted it to feel like you were stepping back in time to the pioneer times,” Holdman said. “Apple orchards were pretty prevalent in Payson for those pioneers, so we decided to show the progress of an apple tree, how it grows a bud and then it blossoms into a full blossom as you get higher up in the temple.”

Outside of temple work, Holdman is working on a 10-foot high by 150-foot long display for Utah Valley University in Orem, Utah. “At UVU, I’m doing ‘Roots of Knowledge’ , which will be our Sistine’s Chapel,” Holdman said. “It is the history of the knowledge from the dawn of men to the present.”

Two other artists from Utah Valley contributed art work to the Payson temple, Richard Miles and John Fairbanks (a prominent early Utah artist who was born in Payson).

The open house, which began at the end of April, is coming to a close after Saturday, May 23, for final preparations before the temple is dedicated on Sunday, June 7.

BRT: Should it stop or should it go? Next post