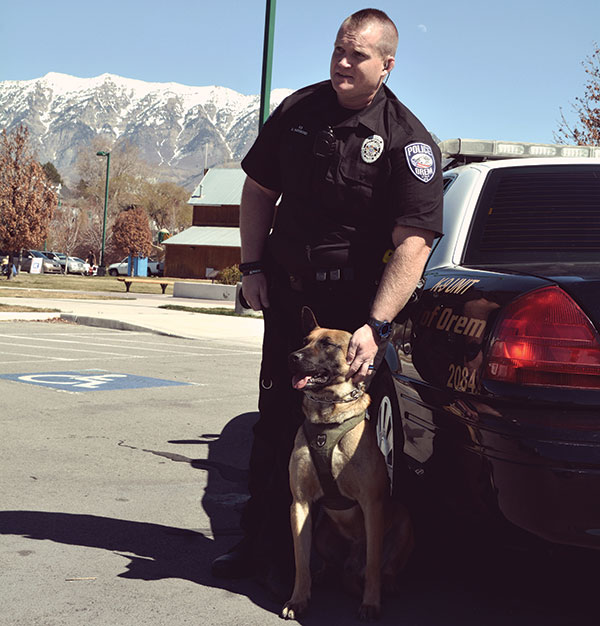 Officer Greer Haymond (with his K-9 partner, Rusty) goes above and beyond to serve and protect. The Orem patrol officer raised money and donations for a family that lost everything in a house fire just before Christmas.

This is a one of three stories about unsung heroes, with ‘lyrics’ focused on airplane crashes, heart attacks and house fires. We’re also singing the tune of heroes in their own lives. Finally, this hero playlist rounds out with hero sandwich recommendations and a list of do-gooders drawn from the Red Cross.

Police officer Greer Haymond was raised in a family that puts a premium on sacrifice — and service above self. He believes people are inherently good, and he practices what he preaches as he patrols the streets of Orem.

Greer Haymond’s least favorite part of his work day is bending down to kiss his children goodbye.

The Orem police officer knows that no matter how careful and skilled he and his co-workers are, there’s a chance he may not return home. Selfishly, he wants to stay home and cuddle with his kids.

But Greer doesn’t do selfish.

“I believe in the mentality, ‘I am second,’” says the seven-year veteran. “This is the perfect job if you have an ‘others-first’ mentality.”

What else would compel a human to hear gunshots and run toward them? Or to see a house on fire and run inside to save a stranger?

[pullquote]“I believe in the mentality, ‘I am second.’ This is the perfect job if you have an ‘others-first’ mentality.” —Officer Greer Haymond[/pullquote]

The latter is exactly what Greer did last November.

He was finishing an overnight patrol shift with some paperwork near Nielson’s Grove Park in Orem when a call came about a house fire close to where Greer was parked.

When he got to the home, the carport was engulfed in flames and the front door was inaccessible. He proceeded to the backyard and noticed Larry Peterson stumbling out of the house. Larry informed Greer that Gloria — Larry’s wife — was still inside the home.

“I took off running into the house and found her and asked her to come with me out of the home,” Greer says.

After saving Gloria and the couple’s dog, Greer reunited the couple on the side of the house and waited for firefighters to arrive.

“This woman had a lot in common with my mother,” Greer says. “You could tell she was really into Christmas. There was a plastic snowman melted to the lawn. Christmas meant a lot to this woman.”

Other responders arrived, and Greer eventually got into his police car and started toward his home in Spanish Fork. As he was on his way, he sent a voice-to-text message to other teammates.

“I asked who would donate to help us get a tree and new decorations for this family so they could celebrate the holidays after this devastating event,” he says. “The response was overwhelming — but not surprising.”

One co-worker donated a tree. Another quickly committed to buy lights. Still others donated money so Greer could buy new decorations.

A few days after the fire, Greer made up a reason to visit the family again (additional “information” needed for his report). Instead of questions, the Petersons — who were displaced with family — were bombarded with Christmas.

Greer doesn’t think there’s anything exceptional about what he did in running into the burning home or in making a sad Christmas a little more merry.

Gloria Peterson’s life — and then Christmas — was saved by the thoughtfulness of Orem police officer Greer Haymond. After running into the flames to save Gloria, Greer returned a few days later with Christmas decorations, giving the Petersons comfort during a difficult holiday season.

“Any other guy would’ve run into that home,” he says. “That wasn’t exceptional. If it was my wife and children in that house, I would want someone to do the same thing I did.”

“When something happens, everyone pulls together to help,” he says. “That’s the world I want to live  in and I believe we do live in. I want my kids to know if they need help, someone will be there.”

Greer’s own heroic example is his grandfather, Alan Thomas, who died in 2010. He was a World War II veteran who “put himself second.”

“Men like him are a dying breed,” Greer says. “He came from the poorest conditions and was more than an ample provider for his family. However, he always put the needs of others first.”

Greer also has great respect for the Spartan 300 who protected the Greeks from the attacking Persians at Thermopylae in 480 BC. He has a replica lambda shield hanging on his wall at home, and he relates to the idea of a few protecting the many.

“I have a plaque that says, ‘In valor there is hope,’” Greer says. “I love that statement — where there are good men, there is hope.”

Greer hopes others in the community find comfort with the men and women who use a shield — or badge — to protect the community.

And he’s proud to be part of them.

BRT: Should it stop or should it go? Previous post

Jimmy & Trina Chapman: Busy family found a spot for everything in Marcy's Orchard with Woodside Homes Next post