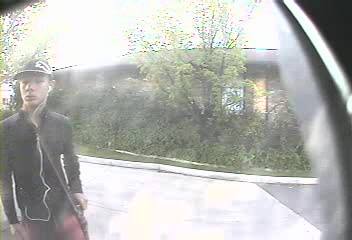 Police arrested two people after they were caught on video installing a skimming device on an ATM at a bank in Orem. A similar device was found on an ATM in Sandy. Police say 25-year-old Alexandro Stefan and Ionela Stefan, 20, picked up one of the devices and were arrested. Police are still looking for two more people, including the man caught on camera at the bank in Orem.

A man reportedly pried open the door of the Alpine Bible Church in Lehi late Monday night, taking a laptop before being chased away by the church’s pastor. Police say the suspect stashed the computer near the church and it was recovered by an officer.

A man called Orem police on Sunday because he was suspicious about the mileage on a car he found for sale online. When the seller met the man, Orem police checked and discovered the vehicle had more than 200,000 miles on it, according to police. The seller got a citation and was referred to the state Motor Vehicle Division.

There still is no trace of a Provo woman who went missing more than a month ago.

Provo police are still looking for Elizabeth Elena Laguna Salgado, who went missing on April 16. Twenty-six-year-old Salgado was last seen walking home from her school, Nomen Global Language School in Provo, at around 2 p.m. Her cell phone hasn’t been used, she hasn’t logged into social media accounts and there’s been no activity on her financial accounts since she was last seen.

There’s a $15,000 reward for information leading to her whereabouts. Anyone with information is asked to contact the Provo Police Department at (801) 852-6210.

No charges in carjack shooting

The man who shot and killed another man who was reportedly trying to carjack a woman at the Orem Macey’s will not face charges, the Utah County attorney has announced. The man who shot 26-year-old Taulagi V. Matafeo — he had a concealed carry permit — reportedly told police that he heard a woman screaming and saw her fighting with Matafeo inside an SUV. He showed his gun, according to police, and Matafeo got out of the car, lunged for the weapon and the man shot him.

At the time of the shooting police were searching for Matafeo in connection with a fight and stolen truck.

10 influential LDS books summarized in one sentence each Next post