Home Things To Do Events The Knead to Give: French toast served up at finish line of AF Canyon Run Against Cancer

The Knead to Give: French toast served up at finish line of AF Canyon Run Against Cancer 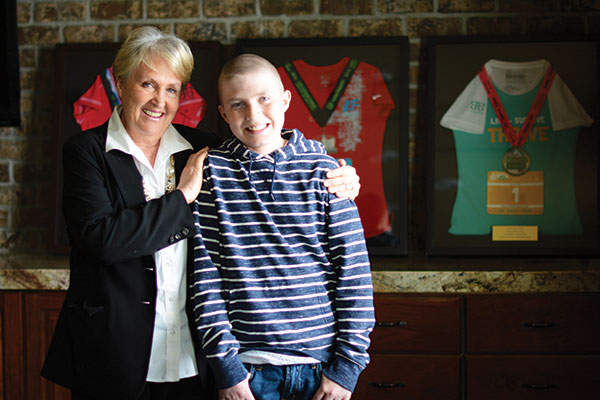 Kneaders founder Colleen Worthington races to serve French toast at the finish line of the AF Canyon Run Against Cancer. The charitable focus is close to her heart as Colleen’s grandson Tanner Smith has been fighting Hodgkin’s lymphoma since September.

Before all of that, Colleen Worthington is ready for the first racers to cross the finish line.

Colleen is the founder of Utah’s well-loved bakery and café, Kneaders. For the past four years, she has been on the race site at 2 a.m. to volunteer at the AF Canyon Run Against Cancer (formerly the AF Canyon Half Marathon and 5K) to greet runners with her famous Chunky Cinnamon French Toast at the finish line.

“Each Kneaders store sends a few people, and we arrive early to slice the bread and start grilling it,” Colleen says. “We put the French toast down as fast as we can and cook until the race is over.”

Colleen is closely tied to the race, hosted by Intermountain Healthcare. Her mother passed away from cancer 40 years ago, and her 13-year-old grandson, Tanner Smith, started fighting Hodgkin’s lymphoma in September and was declared cancer-free in April. Since all of the race fees directly help local families struggling with cancer, Colleen sees her volunteer work as a meaningful way to help families like her own.

“I can’t tell you how many hours my daughter has spent driving her son to other cities to get his cancer treatment,” Colleen says. “The more we can do to build up our local hospitals, the more we are saving precious moments for families dealing with cancer.”

[pullquote]“Colleen’s service through Kneaders has greatly enhanced the race experience. Her generosity is way beyond what we ever expected.” —Phil Barker, Director of Planned and Major Gifts, Utah Valley Healthcare Foundation[/pullquote]

The idea for the race came to Kevin Brooks, an Intermountain Healthcare administrator, while he was driving from the American Fork Hospital to American Fork Canyon. He initially wanted to use the race to promote general wellness in the valley, but after his administrative assistant, Kris Jolley, was diagnosed with cancer, he decided to connect the race with fighting the disease.

“It’s emotional to see families, friends and loved ones cross the finish line,” Brooks says. “Whether they’re battling cancer, supporting someone with cancer or finished chemo two weeks ago, they’re all running to fight cancer.”

This year’s race is on June 27. The half marathon starts at 6 a.m., the 5K starts at 7 a.m. and the event’s first half-mile and mile kids’ run starts at 9 a.m. Colleen will be there, serving French toast until the last runner crosses the finish line.

“Cancer affects everyone’s life in some way, and it takes a community of caring to overcome it,” Colleen says.

And it all happens on a summer morning in June while the rest of the valley is fast asleep.