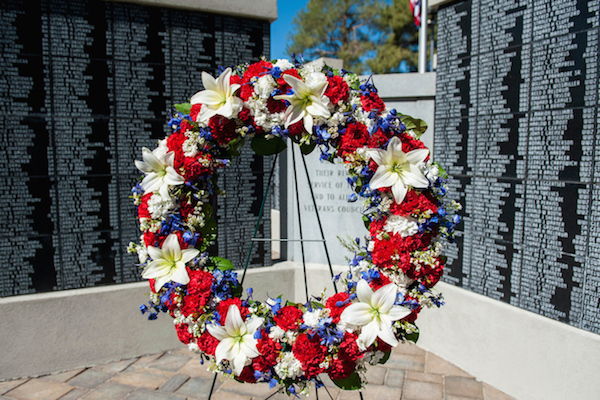 Provo is commemorating the 50th anniversary of the Vietnam War during its Memorial Day program starting at 10 a.m. Monday, to give those veterans the respect and thanks they deserve but didn’t always receive when they returned from service.

“A lot of the speakers and those on the program are Vietnam veterans,” said Whitney Booth, public relations coordinator in the Provo mayor’s office. The wreath-laying will be done by Vietnam veterans Tim Matthews and Randy Edwards. Andrew Wilson, another Vietnam veteran, will give a special presentation on the war.

During the presentation, the city will honor Vietnam veterans for their service and sacrifice; highlight the service of the armed forces and governmental and non-governmental organizations that supported the armed forces; pay tribute to the contributions of the people at home during the war; spotlight advances in medicine, technology and science related to research done during the war; and recognize allies’ contributions and sacrifices.

“It will be really special,” Booth said.

The service also will include musical numbers by the Timpview High School Band, Pledge of Allegiance lead by Miss Provo Malissa Richardson and her attendants and the National Anthem performed by Skyler Mann. The keynote speaker will be Col. Andrew Wood. The hour-long program will conclude with a 21-gun salute by Metro SWAT and the “Taps” bugle call by Timpview High School Band. Active duty and veterans are encouraged to wear uniforms.

In the case of inclement weather, the service will move to the Covey Center for the Arts, 425 W. Center St.

A military honor guard will conduct the raising of the flag and a military gun salute. Remembrance and honors of Alpine’s deceased veterans will be conducted by the playing of “Taps,” and they will honor Alpine’s living veterans by playing a medley of the military service songs.

Standing and singing is highly encouraged when you hear your service’s song so learn the words and practice up so you can represent yourself and your service.

Veterans are encouraged to come in uniform. If not in uniform, please wear whatever veterans attire or memorabilia that will help the city recognize you as a veteran.

Light refreshments will be served at the conclusion of the ceremony.

American Fork’s annual Memorial Day activities start at 6 a.m. with a breakfast at the Fire Station, 96 N. Center St. The charge is $6 for adults and $4 for children ages 12 and under.

At 11 a.m., the city will host a tribute at the annual Memorial Day program at the American Fork Cemetery, 26 W. 600 North. Janice Mayne, an educator, former council member and life-long resident of American Fork will be the keynote speaker.

There also will be a free run of remembrance featuring a mile, 5K and 10K run.

Come honor our veterans at our Memorial Day Program at 9 a.m. at the City Cemetery, 1100 N. 400 East. The event is organized by the Post 19 American Legion, Lehi City Arts and Lehi City. It features musical numbers, a speaker, the posting of the colors, and a 21-gun salute.

All are invited to attend as the community of Lindon will hold its annual Memorial Day Ceremony honoring all Lindon veterans for their military service, at 9 a.m. at the Lindon City Cemetery, 550 N. 200 East. Each year, the Lindon City Police Department, with the support of the mayor and city council, spearheads the effort to collect and authenticate the names of those who have done so much to preserve our freedoms. This effort culminates each Memorial Day at a spectacular, one-hour program that is held including a special message from an honored veteran, patriotic music by a Lindon Youth Choir, the reading of the role of honor, a 21-gun salute followed by the playing of “Taps” and the solemn placing of a traditional wreath upon the monument by an honored guest.

Mapleton will hold its annual Flag Raising Ceremony at 9 a.m. This will be held at the Mapleton City Park (corner of Main and Maple Street) Veteran’s Park.

The Maple Mountain High School Band, under the direction of Chris Wilson, will provide the music and veteran John Hafen will be the featured speaker. To ensure a seat for the service, those attending may want to bring a lawn chair.

There will be a vintage World War I plane fly-over, musical performances, 21-gun salute and more.

Visitors also can walk through the field of more than 1,500 crosses and flags that individually honor those who have served our country and are now buried in the Spanish Fork Cemetery.

15 ways to disguise summer learning as fun Next post