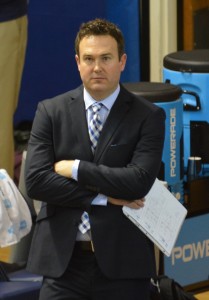 “The principal driving force behind my decision to step away was my two daughters,” McGown said in a press release. “I want to make sure the two of them are getting the best I have and I struggled to give them that with the demands of being the head coach.

“I’ve felt so much support from our staff, from our administration, and of course, our amazing fans. Most of all, I’ll miss the association with our athletes — they are young men of talent, commitment and character. It’s been an honor to go to work with them every day.”

During his time as head coach from 2012–15, McGown achieved a winning record of 88–31 and captured two Mountain Pacific Sports Federation titles.

While the Cougars struggled with injuries and a young team in 2015, McGown concludes his career BYU second all-time in program history in winning percentage (.739) and third in total victories (88). He helped the Cougars reach the NCAA championship match, earning second place in the tournament, and a final AVCA ranking of No. 2 in the nation in 2013.

“Chris has been an excellent coach and has had a positive impact in the lives of many student-athletes,” said BYU director of athletics Tom Holmoe in a press release. “We would like to thank the McGown family for the national respect they’ve brought to the men’s volleyball program.”