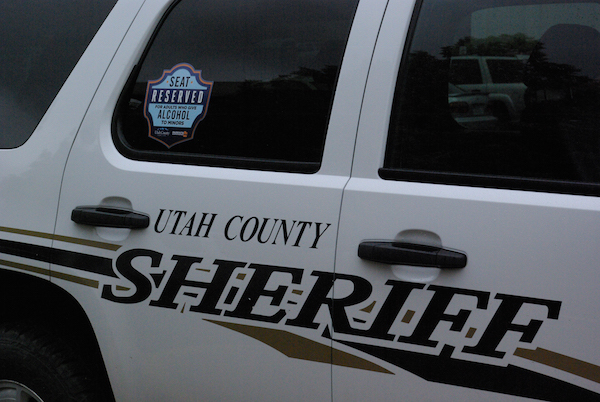 The Utah County Sheriff’s Office has placed decals that say, “Seat reserved for adults who give alcohol to minors,” on the windows of its vehicles. (Photo courtesy Utah County Department of Health)

If you give alcohol to a minor, you’re probably going to jail. That’s the message the Utah County Sheriff’s Office and anti-underage drinking advocates are spreading this week as school gets out and people are planning graduation parties.

Under Utah law, giving alcohol to someone who you know is a minor is a Class A misdemeanor — that means up to a year in jail and $1,000 in fines. And the legal ride will start in the back seat of a police car and a drive to jail to get your fingerprints recorded and your mugshot taken.

“We want them to feel the impact of that experience,” said Utah County Sheriff’s Sgt. Spencer Cannon.

To remind people of the penalty of supplying alcohol to minors before they do, this week the Sheriff’s Office put new decals on the back doors of patrol cars, reading “Seat reserved for adults who give alcohol to minors.”

[pullquote]”They don’t understand the liability they carry if one of those kids goes out and gets in a car accident, or, heaven forbid, their child becomes a victim of a sexual assault.” —Utah County Sheriff Jim Tracy[/pullquote]

Utah Valley may have lower rates of underage drinking than other parts of the country, but any underage consumption of alcohol is a problem, said Lance Madigan, spokesman for the Utah County Department of Health.

“There’s lots of studies that show the later kids start drinking alcohol the less likely they are to become addicted,” he said.

Research shows that the No. 1 reason kids don’t drink alcohol is parental disapproval, according to a press release from the Utah County Department of Health. But studies from the Utah Division of Substance Abuse and Mental Heath indicate that the majority of kids who do drink report they get liquor at home, with parental permission.

Some parents see giving alcohol to minors as a right of passage with high school graduation, Madigan said. “It’s really kind of dangerous.”

Cannon said the majority of kids will celebrate the end of school or graduation with a “fun, wholesome party” but some will plan a party with alcohol supplied by an adult — usually a parent, sibling or other relative. Those parties sometimes happen at home but also out in unincorporated areas of Utah County, like the canyons, the desert west of Eagle Mountain or near Eureka and Elberta.

Deputies will be out patrolling those areas, but “ideally we like to prevent them before they happen,” he said.

And if the criminal ramifications aren’t enough to keep you from giving alcohol to minors, Madigan wants parents and other adults to think about the legal liability. If a minor is drinking at your house or liquor that you supplied, you may be liable for anything that person does while under the influence.

“They don’t understand the liability they carry if one of those kids goes out and gets in a car accident, or, heaven forbid, their child becomes a victim of a sexual assault,” said Utah County Sheriff Jim Tracy said in the press release.

For more information about the danger of underage drinking, go to ParentsEmpowered.org and the Utah County SMART Coalition.