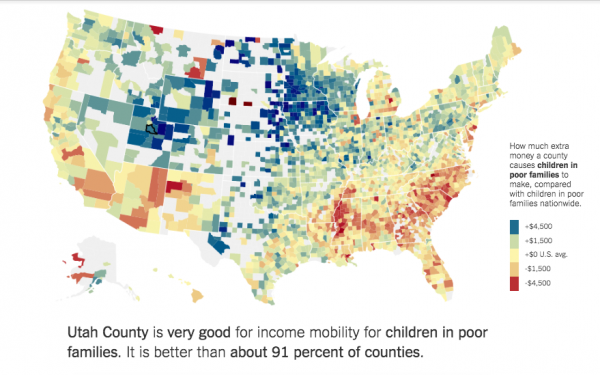 A new study out of Harvard University ranks counties in the United States based on opportunity for upward mobility. While some results are disheartening (young men growing up in Baltimore are at a distinct economic disadvantage, the study shows), the data suggests that kids who grow up in Utah may be at an economic advantage over kids in other areas.

Salt Lake City was ranked among those places most conducive to upward mobility. Like other areas ranked similarly, Utah has elementary schools with “higher test scores, a higher share of two-parent families, greater levels of involvement in civic and religious groups and more residential integration of affluent, middle-class and poor families,” a New York Times article on the study reports.

The results of the study reveal how likely a poor child living in a given area is to make more money as an adult. Utah County is, according to the data, “among the best counties in the U.S. in helping poor children up the income ladder.” Utah County ranks 2,251st out of 2,478 counties, or better than about 91 percent of counties nationwide. The graphic below gives specific data that contributes to these numbers.

The study sought to answer the question of how neighborhoods affect children and their earning potential throughout their lives. In the wake of several years of economic uncertainty, researchers and politicians are eager to determine what factors contribute to positive upward mobility. Read more about the study (and see how other counties fared) here.

Springville woman honors US servicemen with Quilts of Valor Next post