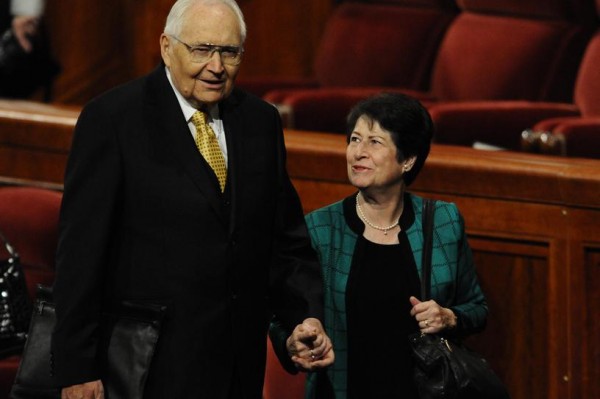 Elder L. Tom Perry, a member of the Quorum of the Twelve Apostles of The Church of Jesus Christ of Latter-day Saints, died today at 3 p.m. after a brief battle with cancer. He passed away at his home. He was 92.

Elder Perry was preceded in death by his first wife, Virginia Lee, with whom he has two daughters and a son. She died Dec. 14, 1974. He is survived by his wife, Barbara Taylor Dayton, whom he married in 1976.

The Church will announce details regarding funeral arrangements as they become available. It is undetermined as to when the vacancy in the Church’s Quorum of the Twelve Apostles will be filled.

Elder Perry was sustained as a member of the Quorum of the Twelve Apostles on April 6, 1974, after serving as an assistant to the Twelve for two years. He also served in the Church as a missionary to the Northern States; a counselor in a bishopric in Lewiston, Idaho; a counselor in a stake presidency in Sacramento, California; a high councilor in the New York Stake; and as president of the Boston Stake. 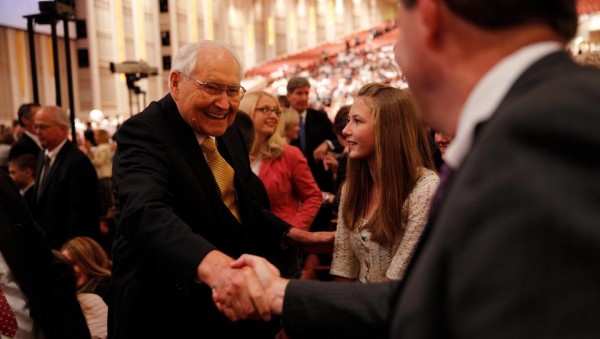 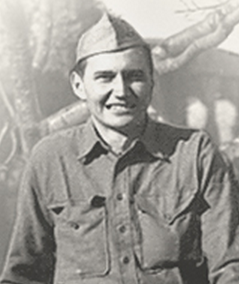 Elder Perry during his time in the military. (Photo via LDS.org)

L. Tom Perry was born Aug. 5, 1922, in Logan, Utah. His parents, Leslie Thomas and Nora Sonne Perry, were both active in Church service and taught their children the gospel from a young age. Leslie served as bishop from the time Tom was born until he was 18 years old. While serving in that calling, Leslie enlisted his children’s — including Tom’s — help in mowing the church lawn, cleaning the building and even balancing books. His mother was a counselor in the ward Relief Society presidency.

Tom also learned lessons in hard work at home. He helped with chores around the house, including milking the cows — a job his mother insisted Tom’s sisters never do. When Tom was too young to milk the cow, he said, she would “take me out to the barn and milk the cow, making it look like I was doing the milking. She could milk twice as fast as Dad, but she never wanted anyone in the neighborhood to see that she was there. I would always come trudging in with the pail so it would look like I was the one who had milked the cow.”

Saturdays were traditionally a time for the family to have fun together. Elder Perry carried this tradition with him throughout his life, even once turning down a job opportunity because it couldn’t guarantee him Saturdays off.

Elder Perry attended college for one year after high school before leaving to serve in the Northern States Mission in 1942. Six weeks after his return, Elder Perry was drafted into military service in the Marine Corps. In many ways, his military service became an extension of his mission.

“During the next two and a half years, I had double the baptisms in the Marine Corps that I’d had in the mission field,” Elder Perry said in an interview for the Liahona. “We had a great group of LDS fellows. The strength of the gospel made life in the service very enjoyable. I don’t regret my service experience at all.”

Part of that experience included building a chapel for the Christians in Nagasaki. He told the story movingly in the following short film: 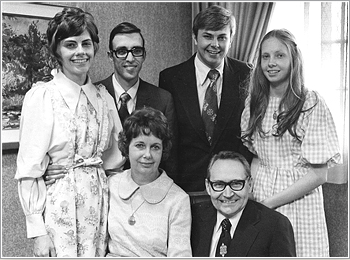 Elder Perry with his family. (Photo via LDS.org)

Upon his return from the service, Elder Perry married Virginia Lee in the Logan Temple on July 18, 1947. He graduated from Utah State University in 1949, then did graduate work there. He worked in retail as an executive in Idaho, California, New York and Massachusetts.

Shortly after moving to Idaho for his first job, Elder Perry received the call to serve in his ward’s bishopric. His initial impulse was to decline, noting that his budding career and young family required so much of his time. But despite the challenges, he made the decision to serve. He continued to serve in the Church throughout his life.

Tom and Virginia had two daughters and one son. They carried on many of the Perry family traditions with their own children, including involving the children in Church service and setting aside Saturday as a family day.

“The Lord is very kind,” Elder Perry later said of adversity. “Even though some experiences are hard, he floods your mind with memories and gives you other opportunities. Life doesn’t end just because you have a tragedy — there’s a new mountain to climb. Don’t spend a lot of time sulking over what you’ve lost. Get on with climbing the next mountain.”

He married Barbara Taylor Dayton on April 28, 1976, in the Salt Lake Temple.

Quorum of the Twelve 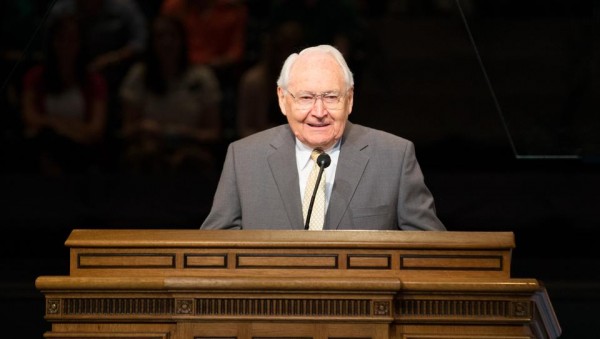 Elder L. Tom Perry was ordained a high priest by Harold B. Lee, who was then a member of the Quorum of the Twelve, before beginning service as a bishopric member in Lewiston, Idaho. In that blessing, President Lee said that Elder Perry would one day sit in the Church’s leading councils.

That prophesy was fulfilled on April 6, 1974, when Elder Perry was sustained a member of the Quorum of the Twelve Apostles and filled the vacancy left by the death of President Harold B. Lee.

Elder Perry will be remembered for his wide smile, distinctive voice and perpetually positive attitude.

“That warmth, that graciousness, the fact that he really did like people and he liked all the members of the Church and appreciated them — I think that’s how he’ll be remembered,” said Elder Quentin L. Cook of the Quorum of the Twelve Apostles.