Home Things To Do Events Tuacahn presents ‘Disney’s Beauty and the Beast,’ ‘Sister Act’ and the world premiere of ‘Disney’s When You Wish’

Tuacahn presents ‘Disney’s Beauty and the Beast,’ ‘Sister Act’ and the world premiere of ‘Disney’s When You Wish’ 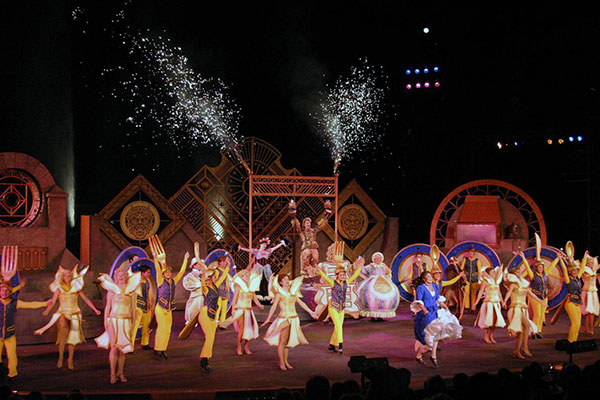 Back by popular demand, Disney’s Beauty and the Beast returns to the Tuacahn Ampitheatre through October. (Photo courtesy Tuacahn Center for the Arts)

IVINS, UT — Experience the wonder of “Broadway in the Canyon” with the exciting musicals coming this summer to the acclaimed Tuacahn Center for the Arts in southern Utah. The 2015 season features something for everyone, including Disney’s Beauty and the Beast, Sister Act and the premiere of Disney’s newest stage production, When You Wish.

Tuacahn is located next to the multi-colored Snow Canyon State Park in the St. George area. The amphitheatre is nestled beneath dramatic crimson cliffs — which provide a larger-than-life ambiance to complement the on-stage storytelling.

To celebrate its 20th anniversary, the 2,000-seat amphitheatre will miraculously transform into a Disney wonderland of fun and fantasy with the premiere of Disney’s When You Wish. The charming collaboration between Disney and Tuacahn brings Disney’s most beloved musicals to the outdoor stage.

Through the imagination of a young girl, Disney’s When You Wish takes the audience on an enchanted journey through popular Disney film and Broadway classics, including Mulan, Aladdin, Tangled, Tarzan, Newsies, Mary Poppins, Jungle Book, The Little Mermaid and many others. This one-of-a-kind production will create lasting memories for all ages as they travel through Disney’s spectacular music library. All of your most wished for Disney characters will come to life as only Tuacahn can present.

“We’ve enjoyed a great relationship with Disney over the last several years and are happy to receive the rights to produce the premiere of Disney’s When You Wish,” says Scott Anderson, Tuacahn’s artistic director. “This fantastic live production will be something your family will never forget.”

This summer, the Tuacahn Amphitheatre will also present the magical story of Disney’s Beauty and the Beast. Bring the children and grandchildren to watch as the Beast’s castle is created on the outdoor stage, and discover if love can find its way through a nearly unbreakable curse.

In 2005, Disney’s Beauty and the Beast was the first Disney musical that Tuacahn received license to produce. It was a smashing success! Back by popular demand, Tuacahn will enchant you and your family once again as the Beast must learn to love and be loved before it is too late.

Rounding out the 2015 summer show season will be the Tony Award nominated Sister Act, a divine musical comedy that shows the power of friendship. This musical comedy will have you crying and laughing at the same time, while leaving you praying for more.

Disney’s When You Wish will run in repertory with Disney’s Beauty and the Beast from May through October 2015. Sister Act will commence in August 2015.