6 locations in Utah for a ‘Jurassic World’ experience 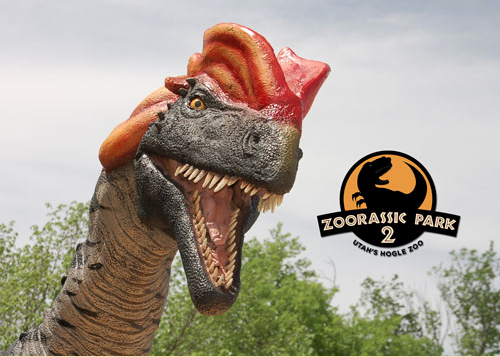 This is the closest you’ll get to walking with the dinosaurs. From May until September, Hogle Zoo in Salt Lake has its Zoorastic Park display, which includes 14 animatronic dinosaurs. While not real dinosaurs, you can see live animals from orangoutangs to elephants. The Zoorastic Park exhibit is free with paid admission to the zoo ($14.95 for adults and $10.95 for children). Hogle Zoo is open seven days a week from 9 a.m. to 6:30 p.m.

With 60 complete dinosaur skeletons in its galleries and more than 50 hands-on exhibits, the Museum of Ancient Life at Thanksgiving Point is both entertaining and educational. Unleash your inner paleontologist in the Junior Paleo Lab. The museum is open Monday through Saturday from 10 a.m. to 8 p.m. Admission costs $15 for adults and $12 for children.

Learn more about ancient plants and dinosaurs that once claimed Utah as their own at the BYU Museum of Paleontology. The displays come from BYU student digs in Utah, Colorado, Montana and Wyoming. The free museum is open on Monday (9 a.m.–9 p.m.), Tuesday through Friday (9 a.m.–5 p.m.) and Saturday (10 a.m.–3 p.m.)

Roam where dinosaurs once roamed in St. George at the Dinosaur Footprints exhibit. Dinosaur footprints are preserved in sandstone and kept for display. The Dinosaur Discovery Site has the largest collection of dinosaur swim tracks because of its location along a prehistoric lake. Plus, other displays include dinosaur replicas and the Dino Park, where children can interactively learn. The Dinosaur Discovery Site is open Monday through Saturday from 10 a.m. to 6 p.m. and on Saturday from 11 a.m. to 5 p.m. Admission costs $6 for adults and $3 for children (ages $4–$11).

Dinosaur fossils remain etched in the walls of the canyons standing as evidence that dinosaurs once roamed around Vernal, Utah. That’s outdoors. If you want an indoor look at dinosaur petroglyphs, step inside the Quarry Exhibit Hall for displays of fossils kept in the ground they were discovered. Plus, from April to October the monument will be celebrating its 100th anniversary with some special events. The exhibit is open from 8 a.m. to 6 p.m. daily. It costs $10 for a car to enter the park.

Watch replicas of dinosaurs in their natural habits, including prey and predator displays. Then explore as a paleontologist and step into the laboratory. During the summer, the Dinosaur Park is open from 10 a.m. to 7 p.m. Monday–Saturday and from 10 a.m. to 5 p.m. on Sunday. Admission costs $7 for adults, $6 for students (13–17) and seniors and $5 for children (2–12). Learn more at dinosaurpark.org.

Still not enough dinosaur talk for you, then watch the trailer for “Jurassic World” below.

8 fun facts about the LDS Church in Ireland Next post