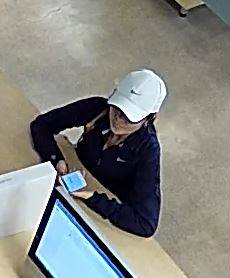 Orem police are looking for a woman accused of using a stolen credit card to buy thousands of dollars of items at Staples, Best Buy and Simply Mac on May 21. (Photo courtesy Orem police)

Langlois was booked into the Utah County Jail on charges of lewdness involving a child; sexual abuse of a child; selling, offering or furnishing alcohol to a minor; and five counts of unlawful sexual conduct with a 16- or 17-year-old.

Prosecutors won’t charge a prison inmate who mailed a razor blade to 4th District Judge Lynn Davis. They say it was an accident that Ramon Somoza mailed the blade to the judge along with some legal paperwork.

Somoza is serving a prison sentence for killing Jesus Landin at the Apollo in American Fork in 2009.

On Monday, Orem police say two people wearing black jumpsuits and ski masks tried to rob the CheckSmart. They couldn’t get past the secured area so they took off. But witnesses gave officers a description of their vehicle and police found and stopped them. A man and boy were arrested.

This week Orem police are asking for help in finding a woman accused of using someone else’s credit card on May 21 to buy thousands of dollars of items at Staples, Best Buy and Simply Mac.

Orem police got a call on Saturday about a man committing a lewd act in public, at 500 S. 400 East, across the street from the SCERA Park. When the officer responded, the man — who turned out to be a registered sex offender — still had his pants down. He was arrested.

6 locations in Utah for a 'Jurassic World' experience Next post