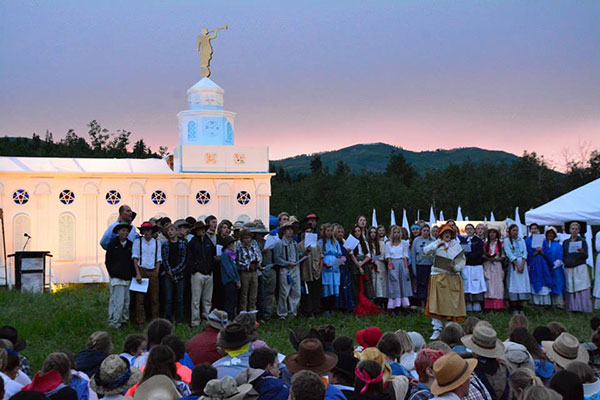 About 340 youth and 75 leaders in the Cedar Hills Utah West Stake constructed a replica of the Nauvoo Temple on their pioneer trek last week in American Fork Canyon. Following the construction, the youth had a celebration including musical numbers and dancing. (Photo by Matt Bennett)

More than 340 youth and 75 adults in the Cedar Hills Utah West Stake spent the first day of their pioneer trek building a 16-foot-by-24-foot replica of the Nauvoo Temple out of wood, muslin and dense foam.

In the trek kickoff meeting on Thursday, June 11, stake leaders surprised the youth with the announcement that they would unite in a common cause by constructing and painting a temple in three hours that day. 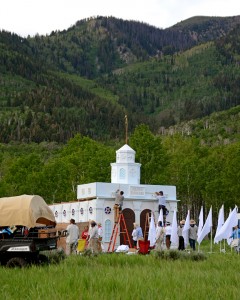 Darrell Anderson, high councilor in the Cedar Hills West Stake, (left on ladder) pre-cut many of the foam pieces and designed the tower (including four working clocks), along with Mike Geddes (right), and Dave Alger. (Photo by Matt Bennett)

Then the youth left the stake center and headed to Cascade Springs where they met their trek families and loaded their handcarts — including cornerstones (cinderblocks) for the temple. They decorated their family flags and trekked for three miles to Little Deer Creek Campground (just west of Midway, Utah), where they spent the afternoon raising walls, making Nauvoo Star windows, painting columns, designing doors, sewing the roof out of white cloth, painting a temple mural, and cutting sunstones and moonstones out of dense foam. Each family had a different assignment for each of the three hours. When the upper structure and towers went up — including a 6-foot-tall Moroni — the replica stood 27 feet tall.

“We wanted the youth to understand how the saints prepared for their trek west. They met in Nauvoo as strangers from England, Canada and the Eastern states and experienced miracles as they built the temple together,” said Jeanette Bennett, Stake Young Women president of the Cedar Hills Utah West Stake. “The saints grew closer to God by building the temple and then making covenants inside. We envisioned our youth growing closer to God and to each other as they helped our beautiful temple arise out of a grassy field.”

Joseph Chou served on the stake youth committee that planned trek during the past eight months. “We really felt the emotion of hard work and sacrifice to build the temple,” Chou said. “I learned not just the physical pain, but also the spiritual and emotional pain the saints faced, especially when we went back to look at the temple. The saints were not as angry as they were sad.”

Darrell Anderson, the high councilor serving with the Stake Young Women organization, oversaw the building committee, including Dave Alger and Mike Geddes, who drew the plans for the project and cut the foam and wood in preparation for the three-hour miracle.

“Right from the beginning I had the distinct feeling I was about to be part of something great,” Anderson said. “I didn’t know how we were going to do it all, but with the group of people we were working with — and the saints pulling for us from the other side — we knew it was going to be amazing!”

Four trek families were assigned to install 145 white flags with vinyl ribbons that stated the names of the 145 LDS temples in operation around the world.

“From the front door of our Nauvoo Temple, you could see the beautiful white flags that show what has now happened around the world because of the foundation of faith exhibited by the Nauvoo pioneers,” Bennett said. 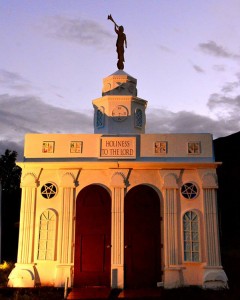 The Nauvoo Temple replica built by the Cedar Hills Utah West Stake stood 27 feet high. The Angel Moroni — which was donated through a miraculous connection —  was 6 feet tall. (Photo by Matt Bennett)

After dinner, the youth celebrated finishing the temple by performing dances and songs they had learned as wards in preparation for trek. Other special numbers included a trumpet solo of “A Poor Wayfaring Man of Grief,” a moving dance to “Prayer of the Walking Child” and a flash mob that recited “Standard of Truth.”

The next morning, a mob woke the youth up at 4:55 a.m. After they packed up everything but their homes (tents), they pulled their handcarts out of camp and watched as the mob destroyed parts of the temple. Some of the youth yelled back at the mob and others watched solemnly as they saw the fires and smoke around the temple they had put their creativity into just a day earlier.

After trekking eight miles on the second day of trek — including a women’s pull, a silent trek past pioneer vignettes, and crossing several small creeks — the 27 families pulled their handcarts back into the campsite. That night, they met again at the temple site. The youth were distraught about the destroyed sections of the temple. Several of them asked, “Can we fix it? Can we rebuild this?”

“It was more painful than I thought it would be to see our beautiful temple torn apart,” Bennett said. “But that was the lesson and the emotion we wanted the youth to feel. Those pioneers gave everything and walked away penniless and cold and hungry. But the temple gave the Saints strength to walk west and build a new temple and create a temple-loving culture, and we are all the beneficiaries of their foundation of faith.”

Anderson said he felt the spirit of the saints while he prepared this temple replica. “I wondered why I could feel them so strongly even at times when I was just in my garage cutting bright smurf blue foam,” he said.  “I realized if I had built the actual Nauvoo temple only to be run out of town, losing not only our home but possibly our lives, I would do everything possible to be part of a group of youth who are honoring us by pushing handcarts and building that temple I sacrificed everything for.”

Watch a timelapse of the temple-building process below.

This will be on the test: Pleasant Grove’s TestOut aces online certifications Next post