Home BusinessQ Magazine Solution revolution: Solutionreach employees are in it to win it

Solution revolution: Solutionreach employees are in it to win it 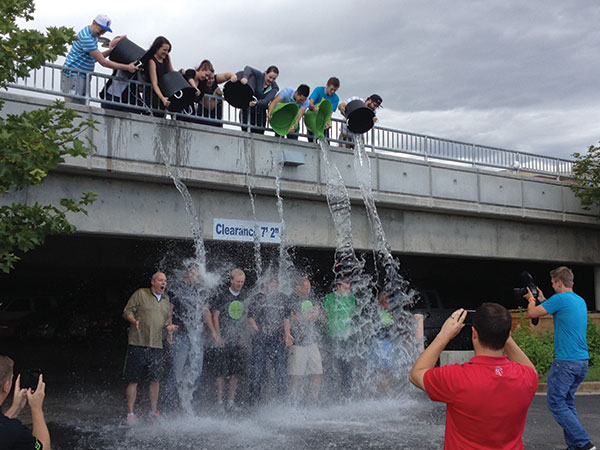 For employees, Solutionreach is the solution to workforce woes.

So what’s their big idea? The idea itself.

“A strong culture means the idea always wins,” says Jim Higgins, founder and CEO of the Lehi company. “It doesn’t matter where the idea comes from — who cares? If it’s a great idea, we’ll implement it. We just want to win.”

“The idea always wins,” says art director Taylor Hinton, in a separate interview. “Taking credit for something is not encouraged — it’s ignored.”

What can’t be ignored is Solutionreach’s success. The multi-million dollar company, which specializes in patient relationship management technology, has been around since 2000, grown to 500-plus employees, and connects 100 million patients with their doctors every day.

BusinessQ sat down with the problem solvers to see their reach first-hand. Here are their 10 brightest and boldest ideas for a cohesive company. 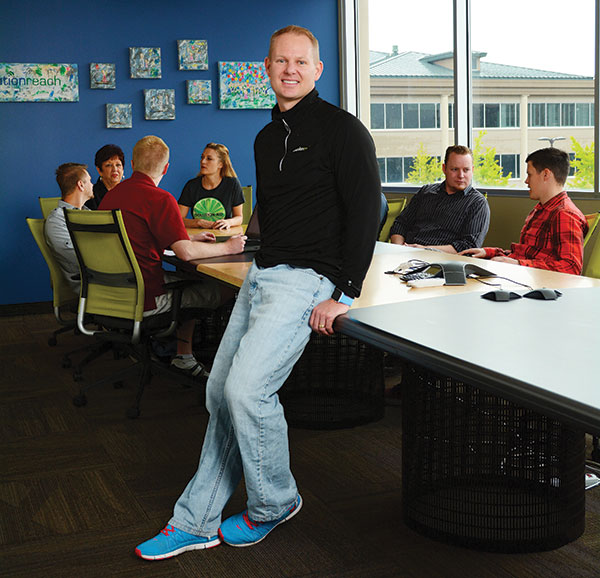 Hail To The Chief. “Working for Jim Higgins is the best,” says Taylor Hinton, art director. “It’s not his way or the highway, which is how it’s been with most CEOs I’ve worked with.”
Adds Ewing: “He’s so freaking energetic. And it’s contagious.”

Keep the good from the “good old days.”

“When we were first starting out, it cost us $15 a month for the water bottle in the office,” Higgins says. “Then we had to cancel it because it was too expensive. (laughs) The beginnings of a company are filled with days that are crappy — but they make you scrappy. They make employees rally around the cause. We’ve tried to remember our roots and keep that scrappiness as we’ve grown.”

“We don’t have employees. We have solutionaries,” Higgins says. “We even defined the term. It’s solution + revolutionary. It’s employees who are driven — employees who work hard in a culture that is passionate. We’re solving hard problems, and our team is unique. We needed a term that recognizes their passion and skill.” 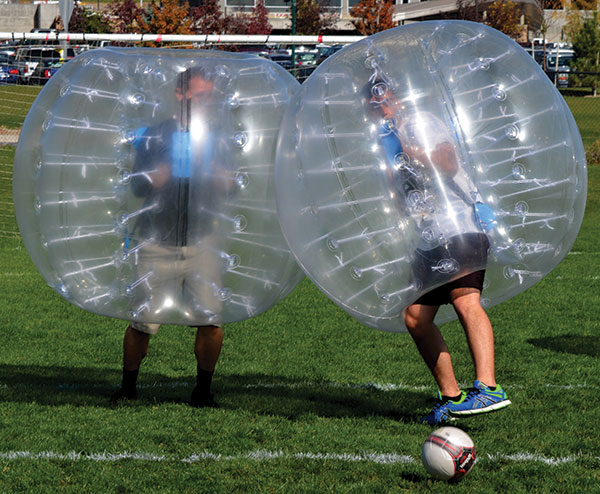 Ballers. It’s BubbleBall, boys and girls! To celebrate the team (and let off steam), employees at the Lehi company just rolled with it. “You have to have fun as a company,” says CEO Jim Higgins. “Or else you will absolutely go crazy.”

“Everything is personal. We are here all the time, and it’s OK to embrace that. This is life. Let’s make it matter,” Higgins says. “Managing by metrics is critical, but you can get too caught up in the numbers. It’s about people. Be a friend. If you make it too hierarchical, people won’t be able to approach you. I’m Jim. They can call me Jim or CEO or whatever. But management teams cannot be unapproachable.”

“Everyone respects Jim — no one fears him,” says Sid Ewing, senior director of marketing.

The “idea always wins” has led to an environment of support and growth.

“We hire the best there is and strive to improve each other,” Hinton says. “I have a team of designers who could out-design me on any given day, and I love them for it.”

Idea #5: Finish what you start

“We have two awards we give out every quarter, and the criteria is simple. First, if no one else is around, would you give yourself a fist pump? And second, be a finisher. Everyone starts projects — very few actually finish them. We finish things around here.” 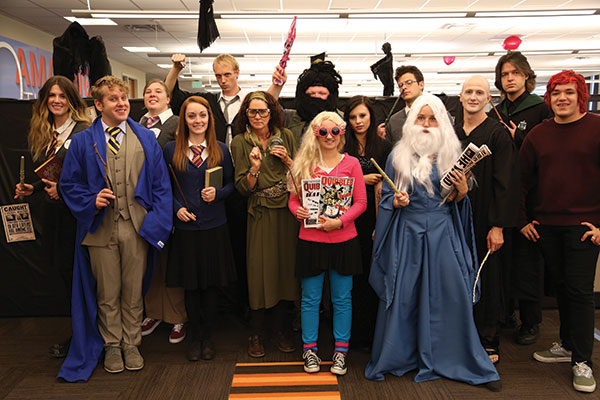 Scary Fun. Just your typical Oct. 31 at the office.

The solution is clear.

“We want to be transparent,” Higgins says. “We want to pass on business knowledge and create an environment where people learn and care about what they’re doing.”

But is Higgins just building up his future competition? He can only hope.

“We want to build entrepreneurs here,” he says. “If our employees go off and build their own companies, patterning their culture off of what they learned here, that’s a win. That’s a company legacy that excites me.”

Giving back is the Solutionreach way. For the past three years, the company has sponsored the SolutionRun, which supports the Leukemia Lymphoma Society.

“Life is about giving back and helping others,” Higgins says. “Everything else is noise.”

It’s a cliché for a reason, people. 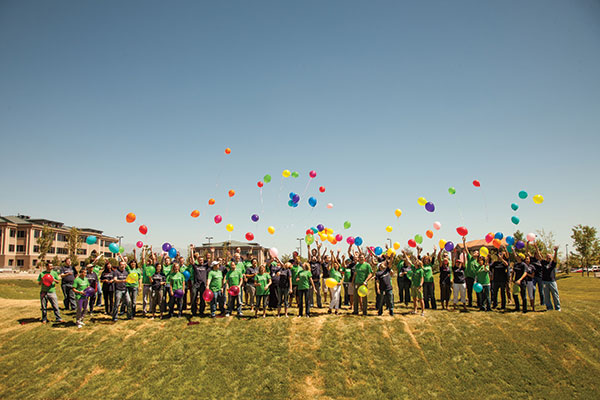 In The Running. The SolutionRun is an annual company 5k to support the Leukemia Lymphoma Society. “I love being part of a company that cares about causes outside of itself,” says Sid Ewing, senior director of marketing. “It’s refreshing.”

The Lehi company has a great office with all the perks — cool break rooms, a basketball hoop, a foosball table and a soda fountain that runneth over.

Culture comes from a greater purpose. All the perks in the world won’t mean anything if employees aren’t connected in ideas and ideals.

“If you’re looking for a job, we don’t want you. If you’re looking to make a lasting difference, you’ll fit right in,” Higgins says. “At Solutionreach, we’re building something that can last. We’re not perfect, but we want to be.”

This will be on the test: Pleasant Grove’s TestOut aces online certifications Previous post