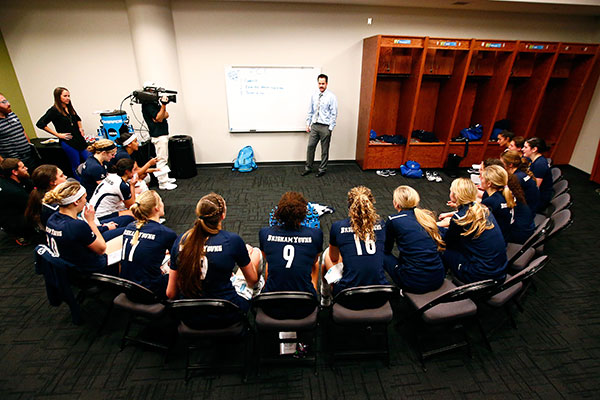 “We are pleased to announce Shawn as our new men’s volleyball coach,” said Tom Holmoe, BYU athletic director, in a press release. “He has an incredible love for volleyball and has put together an outstanding resume as both a coach and as a former student-athlete. In just four short years, Shawn guided our women’s volleyball program back to national prominence, including a spot in last year’s national championship match. He has been successful at every level, and I’m excited to see him make the transition to coaching our men’s program.”

In 2011, Shawn Olmstead took over as the BYU women’s head volleyball coach. During the 2014 season, Olmstead led the women’s team in a 30–5 winning season that ended in a second place finish in the NCAA Tournament. The Cougars became the first unseeded team in NCAA history to make it in a final match. That successful season — which had three players (Jennifer Hamson, Alexa Gray and Amy Boswell) on the AVCA All-Americans in 2014 — earned Olmstead the 2014 AVCA Division I National Coach of the Year, All-Pacific South Region Coach of the Year and WCC Co-Coach of the Year.

“I will certainly miss the day-to-day interactions and relationships I’ve developed with the student-athletes on the women’s volleyball team,” said Olmstead. “I love each one of them and I’m excited to watch their development at BYU. With Heather as the new women’s volleyball coach, I know the program will continue to be successful and represent BYU well.”

Shawn Olmstead is handing over the women’s volleyball team to assistant coach and sister Heather Olmestead.

“We are pleased to announce Heather as our new women’s volleyball coach,” Holmoe said in a press release. “She has been an integral part of the continued success and development of our nationally recognized women’s program over the past four seasons. Heather is passionate about volleyball and has an incredible desire to help our student-athletes improve. As a former collegiate volleyball player and coach for three different programs over a 13-year period, she understands the profession well and knows what it takes to be successful. We are excited to have her lead our women’s volleyball program.”

Heather Olmstead joined the BYU women’s volleyball team in 2011 as an assistant coach to her brother. Outside of the historic 2014 season, she also helped the Cougars win four straight Deseret Duel titles, two WCC championships, three trips to the round of 16 at the NCAA Championships, and coached five AVCA All-Americans.

“I’m humbled and excited to lead the BYU women’s volleyball program into the future,” Heather Olmstead said in a press release. “I would like to thank President Worthen, Vice President Richardson and Tom Holmoe for the confidence they have in me to continue the rich women’s volleyball tradition both academically and athletically at BYU.  I’m extremely honored to continue to develop relationships with the wonderful young women on our team. I’m excited to get in the gym and continue preparing for the 2015 season.”

Before joining the BYU volleyball staff, Olmstead coached from 2006–11 for Utah. She was a four-year starter on the Utah State volleyball team from 1998–2001.

Recently, Olmstead was selected as an assistant coach of Team USA for the 2015 Pan American Games, held in Toronto, July 16–25. According to a press release, Olmstead will assist head coach Dan Fisher of the University of Pittsburgh. The Pan American Games are the third-largest international multi-sport games in the world. More than 40 countries and 5,000 athletes compete in the event held every four years.

Adventures in babysitting: 5 ways to set your sitter up for success Previous post