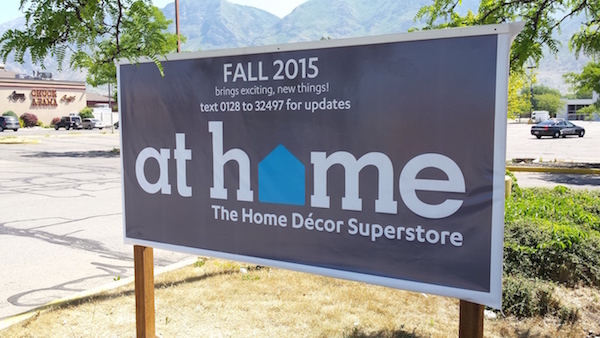 At Home, a furniture décor store, is opening in Fall 2015 where the old Kmart building was in East Bay. (Photo courtesy provomayor.com)

Provo city has turned its focus to filling empty retail space over the past few months, especially in the East Bay area.

Now East Bay has its newest tenant. A sign went up announcing At Home,  a home décor superstore, which will open in the old Kmart building in Fall 2015.

“We’re excited,” said Corey Norman, Provo deputy mayor. “When we did a study a couple of months back, we recognized a couple of things. We recognized that this is one of the missing pieces that our residents were looking for. There was really no place for our residents to purchase home goods when RC Willey left.”

While At Home has been looking at Provo locations for a long time, Provo city couldn’t say anything as construction began because many of its staff members were required to sign non-disclosure agreements until At Home announced its presence.

Norman says that there are multiple businesses looking into different retail locations in Provo, specifically in the East Bay area which “generates quite a lot of interest.” However, Provo city isn’t able to announce any new businesses at this time.

“They (interested businesses) would not want their competitors to know,” Norman said. “Sometimes I want to stand on the rooftops and shout about all the good things we have going on in Provo.”