Home Things To Do Stage Go, go, go, go to ‘Joseph’: SCERA’s colorful cast makes production a party for all 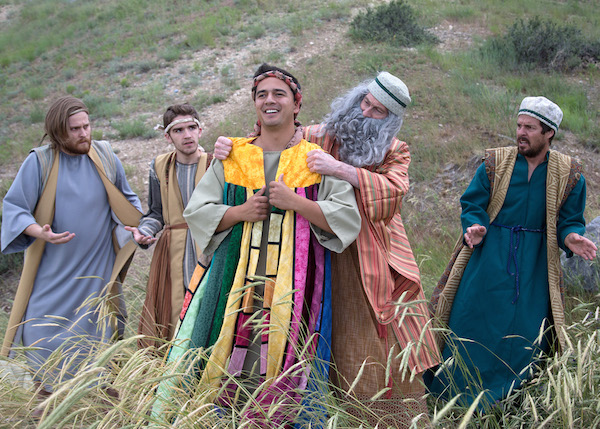 In an outdoor theater the lights don’t dim, the curtain doesn’t rise and the spotlight doesn’t settle on the performers when a show begins — but in the SCERA’s production of “Joseph and the Amazing Technicolor Dreamcoat” a figurative spotlight shines on the cast as the music starts playing.

“Joseph” boasts a whopping cast size of 95 cast members — including about 40 children — and is one of the largest casts the SCERA has seen. (Last year’s production of “Les Miserables” was considered one of the bigger SCERA casts with 70 cast members.)

“It’s daunting to take on that many people,” said Shawn Mortensen, director and choreographer. “We really try to include everybody and make them feel just as important as the brothers or anybody else. Every group has their time to shine.”

And shine they do. The figurative spotlight is an aura of color created by the cast as they parade onto the stage for each of the scenes. The children and adult ensembles channel energy that is as vibrant as the colors on Joseph’s coat. Not to mention that the choreography makes you think you’ve stepped into an 80s workout video meshed with a disco party at a night club. It’s so much flare that you’ll want to join in, which Mortensen is hoping for.

“The Shell is huge. The stage is 75 feet across, so it is just a massive venue,” Mortensen said. “There’s a chance to get distracted, so I wanted the show to be very immersive. I wanted it to feel like they were being pulled into the show so that they feel at liberty to sing and clap along.”

The musical, with music by Andrew Lloyd Webber and lyrics by Tim Rice, tells the story of Joseph of Egypt from the Bible. Out of jealousy, Joseph’s 11 brothers sell him to Egypt. Facing different trials — including being a slave, imprisonment and dream interpretation — Joseph fills a critical role in saving all of Egypt and the family that betrayed him.

And with the energetic ensemble able to carry the comical show on their own, there is no point in talking about the leads. But if I must, I most definitely can.

For the 29 colors listed in the song, “Joseph’s Coat,” the cast members were given a specific color to individually choreograph.

Actually, cancel that page because Corey Morris is a perfectly loveable Joseph, naive enough at his own presumptuous dreams and enthusiastic enough to keep the audience on his side.

“Corey is great. Everybody likes him,” Mortensen said. “I feel like that is such an interesting attribute for Joseph to have because people like him off stage. Then he is on-stage and you automatically want to root for him.”

Though only teenagers, the two narrators control the stage with their on-point vocals directing the plot of the story. Mortensen calls the narrators, McKenna Hixson (16) and Abbey Wood (18) “born performers.”

“They command some attention that for 16 and 18 year old girls is power,” Mortensen said.

With talented vocalists as leads, you would think that would be the winning moment for a cast, but who really takes the cake in this production are Joseph’s brothers. The brothers walk a fine line of sinister and  playful as they mock Joseph behind his back. Suddenly 11 brothers become too many because you want to see each of them reacting and your eyes can’t take it all in.

“It’s just a fun, come with your family, sit back, laugh and sing (kind of show),” Mortensen said. “And you might find yourself choking back tears, but that is what theater is about, having some sort of emotional connection with what is happening on stage.”