Prosecutors say 27-year-old Jose Angel Garcia-Jauregui shot Wride through a truck window during a traffic stop near Eagle Mountain, then later during a chase shot Sherwood. Then 17-year-old Grunwald, Garcia-Jauregui’s girlfriend, was driving the truck. Her attorneys argued that she was an unwilling participant.

The Utah board of pardons and parole will decide when she gets out of prison, after she’s served the 30 years or if the sentence will last longer. 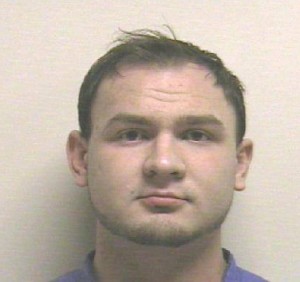 Bryce Cazier, a former BYU student, was sentenced for having a meth lab in his Provo apartment. (Photo courtesy Provo police)

A judge on Wednesday sentenced former BYU student Bryce Cazier, 22, to spend 60 days in jail, pay a $1,483 fine and spend 36 months on probation for operating a meth lab out of his apartment near the school. Cazier got credit for two days he served in jail, and will start his sentence by 5 p.m. on Sept. 1.

Cazier turned himself in to police on Nov. 12, days after he accidentally started a fire in his room, which led to his roommates breaking into his locked room and the discovery of the lab. Police said they found chemicals used to make meth at his room at Riviera apartments, including acetone, lighter fluid, blister packs of medication containing pseudoephedrine and batteries. They also reportedly found meth on his laptop.

A 9-year-old girl called Orem police on Wednesday to report that her mom was intoxicated. When officers arrived they discovered the mom’s blood-alcohol level was more than three times the legal driving limit, and she was charged with intoxication and child neglect. The girl was turned over to relatives.

On Monday morning police in Spanish Fork arrested a 15-year-old boy who they say started a fire at the Doug Smith car dealership there. The damage estimate from the fire is $200,000.

A building in Birdseye that’s part of a treatment center for people with sexual additions caught fire Monday morning, destroying the structure.

This is the second time this building has caught fire — it was set to be demolished. If you have information about the fires, call the Utah County Sheriff’s Office at (801) 794-3970.