How to raise confident children 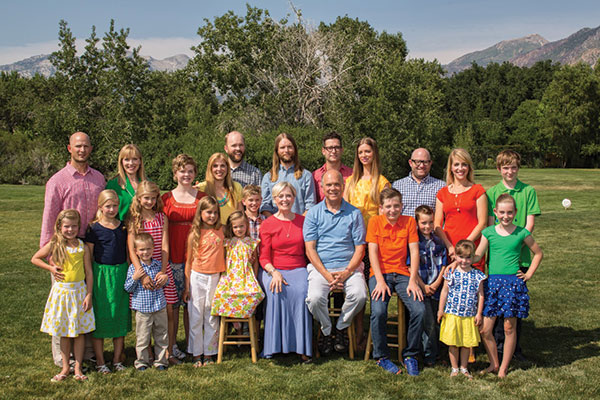 Robert and Shauna Valentine’s extended family — 5 kids and 13 grandkids — all in the same place at the same time … is one of Shauna’s significant accomplishments.

Highland’s Shauna Valentine is the mother of five success stories. Their accomplishments vary from medicine to music to movies, but they all share parents who are devoted to their talents. Even though Shauna humbly gives all the credit to her kids and husband, Robert — she shared with Utah Valley Magazine what she did as a parent, what she didn’t do and what wisdom she gained along the way.

Let’s start with a walk through the pedigree chart. Oldest son Christopher is a physician who is the medical director at Health Choice Utah. Next is Lisa Valentine Clark, mother of five, co-founder of the Thrillionaires Improv group, actress, author and creator of web series “Pretty Darn Funny” and “Once I Was A Beehive.” (Read about the upcoming movie on page 56). Then comes Gina, she graduated magna cum laude from BYU, is a mother to four and was the family’s athlete growing up. Number four in the family is James, who travels the world as the guitarist for Grammy-award winning Maroon 5. Amanda, the baby of the clan, is a fashion designer and competed on season 11 and season 13 of “Project Runway.”

Mom of the Neighborhood

The Valentine family moved to Lincoln, Nebraska, when Robert accepted a teaching position at the University of Nebraska. As the kids grew up, Shauna’s house became the neighborhood hangout. While her children were in the minority as members of the LDS Church, their friends respected their beliefs and Shauna’s home.

“We had a sign on the wall that said ‘No put-downs, this is a safe place,’” Shauna says. “My kids’ friends noticed and a few of them actually wanted their own sign.”

Shauna says a big part of raising confident children is letting them try new things and fail. Before James got into music seriously, he desperately wanted to play baseball.

“He was one of the youngest in his age group and he hadn’t matured yet so he was smaller. He tried so hard and wanted it so bad,” Shauna says.

Baseball didn’t pan out, so James decided to pick up a guitar, and the rest is history.

“It’s good to introduce your kids to lots of things and see what works,” Shauna says. “Not everything sticks and that is OK. I also think it’s important to openly acknowledge, ‘That didn’t work out, let’s think about what we want to do now.’”

As the Valentine kids became adults, Shauna learned to support them in different ways. When Amanda was asked to return to Project Runway after being cut on a previous season, Shauna was hesitant to watch her daughter go through it all again. But she decided her role was to talk through the pros and cons with Amanda and to support her no matter what. Amanda went on to take second place in season 13. 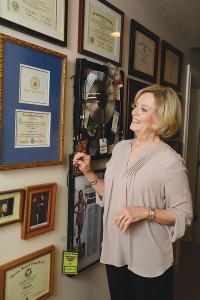 Shauna Valentine has dedicated a wall in her home to celebrating the highlights of her family’s life — from college diplomas to award-winning records to magazine covers.

Finding Joy in the Journey

Shauna didn’t necessarily focus on making sure her kids won first place every time, rather that they progressed and enjoyed the process of whatever pursuit they chose.

“She gave us permission as children and encouragement as adults to not worry about rating the end product, but to enjoy the process of working at the thing,” daughter Lisa says. “Quieting the naysayers, sometimes in my own mind, is difficult — but my mother has always been my ally in reminding me ‘Why not you?’”

Above all, Shauna wanted to give her kids a loving childhood where they could explore, whether it was at the museum or a play date or at the library.

Son Christopher says, “They gave us opportunities to try different things. We had space to make decisions, but it was a safe space in which we could try and fail.”

Daughter Amanda adds, “They strongly encourage education, even beyond the classroom . . . my parents were constantly reading, writing, studying and traveling and we all wanted to be like them — students of the world.”

“She always explained things to us in ways we could understand,” she says. “Things other parents may not have taken time to explain to their children.”

Let Them Shine in Their Own Light

Shauna’s five kids have five different personalities and she quickly learned that she couldn’t parent them the same way.

“No matter what we gravitated toward, from biology to fashion to everything in between, they placed a high value on us developing our own voice,” daughter Amanda says. “And they never placed more value on one vocation over another. They encouraged us to be well-rounded, informed individuals.”

As busy as Shauna was raising her children, she made time to do her own projects, too. Whether it was the PTA or a church calling, she brought her kids along for the ride.

When her kids were older, she got involved in the community and was the coordinator of an at-risk youth program and helped plan large events including the Sesquicentennial Celebration of the Mormon Trail and the open house of the LDS temple in Nebraska. Shauna’s husband always encouraged and supported her in these pursuits, and Shauna believes that example affected her daughters.

“They observed the way my husband treated me and it had an impact,” Shauna says. 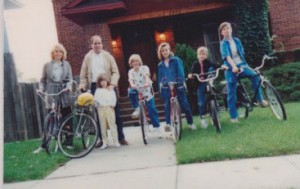 Even though taking five children anywhere can be challenging, the Valentine kids got out and experienced the world together. Daughter Gina says, “We were exposed to a variety of things like tours to the potato chip factory, library reading programs, summer entomology classes at the university, bike rides, hikes to caves, and more.”

Having children in the limelight has made for some exciting moments in Shauna’s life.

When Maroon 5 went to the Grammy’s for the first time, James took his mom as his date. She was sitting next to him when Maroon 5 was announced as the Best New Artist and she let out an ear-piercing scream.

“Quincy Jones came up to me and took my hand and said, ‘You must be so proud,’” Shauna recalls. “I was.”

But what Shauna is most proud of is knowing that her children treat others with kindness and respect.

“So many people who were on tour with James, like the chef or the bus driver, would tell me how much they liked him and how nice he was,” Shauna says. “That is what matters to me.”

One of the things Shauna was most touched by was when James spent the day at the hospital making music with a terminally ill little girl who would pass away days later. He even attended her funeral.

As Shauna’s children now have families and lives of their own, she still finds ways to cheer them on. Whether it’s attending Lisa’s book signing or hosting art lessons with the grandkids, she will always be a proud and loving mother and grandmother.

“I think it’s safe to say we all owe any success to our wonderful parents,” Amanda says.

6 tips for raising entrepreneurial kids and teens Next post