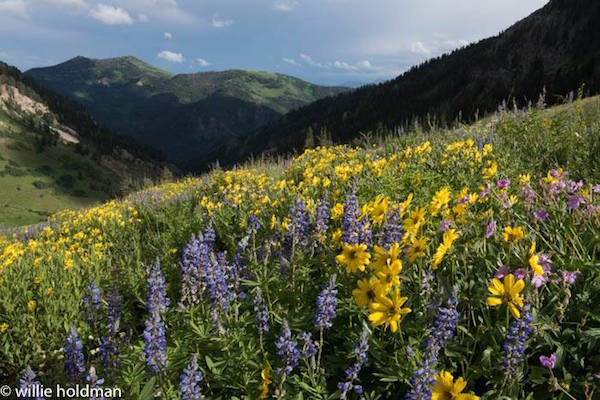 Mary Ellen Gulch is the property that sits right below part of the 416 acres that were on the table to be swapped. (Photo by Willie Holdman)

Even with the signing of the Mountain Accord on Monday (minus language about a land swap in American Fork Canyon) a group dedicated to protecting American Fork Canyon will keep doing what it’s been doing — trying to keep the canyon open to everyone while preserving it from development.

Willie Holdman, co-founder of Protect and Preserve American Fork Canyon, said ultimately to stop development the canyon will need some kind of protection — a federal designation, conservation easement or someone (or a company) who buys the property with the goal of protection so people can “use it as they have been for generations.” But the Mountain Accord “was a good first step. … This decision helped us slow the flow a little bit.”

The Mountain Accord is a plan, though not legally binding, with “the goal to ensure the activities we enjoy in the Central Wasatch will continue while protecting the valuable watershed and sensitive environmental area that we all benefit from,” according to the group’s website. After more than a year of meetings and taking public comment it was signed by representatives from more than 20 organizations, including city government, environmentalists and ski resorts. Utah County wasn’t represented, even though the draft agreement included a proposed land exchange between Snowbird and the National Forest Service — 416 acres of forest property at the top of American Fork Canyon (Mary Ellen Gulch and Mineral Basin) and in Little Cottonwood Canyon for 1,400 acres of private property in the Cottonwood and American Fork canyons (this is the part that was deleted).

Just deleting it from the accord won’t kill the land swap, though. It’s federal land, so the proposal will go through a National Environmental Policy Act process including environmental study and public comment.

According to Snowbird, the exchange wouldn’t facilitate or propose development on Miller Flats or a gondola to Tibble Fork, and hotel and condos wouldn’t be allowed on Utah County land that’s part of the exchange. It says any future proposal to connect the ski resort with American Fork Canyon would be subject to approval by the Forest Service, Utah County and other entities.

However, Holdman says the land swap will pave the way for development on the land Snowbird already owns in the area, about 3,000 acres. It already has two chairlifts on the Utah County side of the resort.

“Swapping these lands connects it all together and allows them to develop,” he said.

Keeping the canyon as-is is important because it’s unique among canyons along the wasatch — a primitive canyon where people can hike, ride horses and ride ATVs, said Holdman, who’s been using American Fork Canyon for 30 years and goes up three or four times a week. Development likely would mean more users, wider roads and mass transit — the canyon has its peak periods where lots are full and traffic at the entrance gate is backed up, but most of the time the canyon isn’t crowded, he said.

Snowbird says it would work with recreational users of the canyon to continue to allow those activities on Snowbird property, “where they can be done safely.”

For now, Holdman said Protect and Preserve American Fork Canyon will keep expanding its base and meet with city councils and mayors in Utah County to share information. They’d like to form their own steering committee, including people who use the canyon, to help make decisions about what’s best for the canyon and its users.

Correction: An earlier version of this article said Snowbird was holding two public meetings on July 27 in Provo and Aug. 5 in Cedar Hills. Those meetings will not be held.

Russell M. Nelson set apart as president of the Quorum of Twelve Apostles Next post