#SquadGoals: 6 things BYU football should focus on during Fall Camp

This spring and summer the #SquadGoals hashtag has been dominating social media.

For those not in the know, Urban Dictionary defines Squad Goals as, “An inspirational term for what you’d like your group of friends to be or accomplish. Used best when placed at the end of a directional statement.”

As fall camp approaches, I thought it would be a good idea to assess what BYU’s squad goals should be to put them in the best position to survive a brutal four-game stretch to open the season that includes road games against Nebraska, UCLA and Michigan with a home game against Boise State. 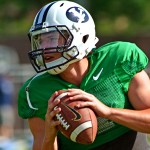 The number one goal for Bronco Mendenhall and his staff should be keeping everyone healthy going into the season.

We saw how difficult it is to win or even compete last season when not playing at full strength. With Taysom Hill and Jamaal Williams coming off of injuries that cut their seasons short, it will be a tough balancing act to ensure they get enough reps to be prepared for the season, while preventing them from suffering setbacks. 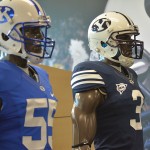 A close cousin to Squad Goals is the idea of being Squad Deep, meaning your squad is out in full force.

How deep are the Cougars? Can they sustain the rash of injuries that inflicted the team last season?

It’s important to see if the younger guys on the team have what it takes to play at this level. Depth is important. Despite the goal of staying healthy, injuries will happen. Fall camp is the time to make sure the backups are prepared in the event a starter goes down. 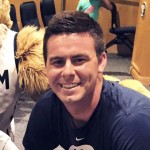 Tanner Mangum will have every opportunity to establish himself as BYU’s No. 2 quarterback this fall.

As we’ve learned from “Friday Night Lights,” “Varsity Blues” and the 2014 BYU Cougars, it’s nice to have a highly touted signal caller running the show. But what happens when Jason Street breaks his neck, Lance Harbor blows his knee or Taysom Hill breaks his leg?

In the fictional world of football the underdog always prevails. But in the real world things aren’t always that simple. Last year, the team had a four-game losing skid before righting the ship after Hill’s injury. Not all of that is on Christian Stewart, who performed admirably considering the circumstances. But it is of utmost important to make sure QB2 is ready to go just in case his number is called.

Many Cougar faithful assume that Tanner Mangum, who was the co-MVP of the Elite 11 camp in 2011 with future Heisman Trophy winning quarterback Jameis Winston, will have a strangle hold on the backup position. But will the strong-armed signal caller from Eagle, Idaho be able to shake the mission rust quickly? Also competing for the backup position will be returning sophomores McCoy Hill and Hunter Moore along with incoming freshman Beau Hoge. 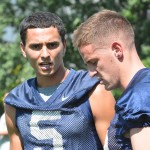 Nick Kurtz (left) and Mitch Mathews each give Taysom Hill tall targets in 2015. (Photo by UtahValley360.com)

Hypothetically, one way to keep Hill healthy is by passing more.

Last season we saw glimpses of the growth he made in the passing game as his completion percentage improved from just 53 percent as a sophomore to nearly 67 percent as a junior. But that only works if the offensive line gives him enough time and the wide receivers can get open.

The past two seasons Hill has been sacked an average of nearly 3 times per game, which is too many.

One of Hill’s strengths is his ability to make something out of nothing when a play breaks down, but he needs to show more patience before scrambling. This year’s crop of receivers is diverse, from the tall and lanky who can go up and win jump balls (Mitch Matthews, Nick Kurtz) to the speedsters (Devon Blackmon, Trey Dye, Mitchell Juergens), and should give Hill the weapons he needs so he doesn’t feel as much pressure to leave the pocket. 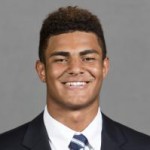 This is the season Fred Warner has been waiting for. It’s time to catch the nation’s attention.

Shore up the D

After recording one of the best defensive seasons in program history in 2012, ranking 3rd in the nation in total defense and 2nd in rushing defense, the team has fallen on hard times the past two seasons.

Last year, for example, the Cougars ranked 56th in total defense. The Cougars especially struggled against the pass, ranking 112th out of 125 FBS teams in passing yards allowed.

This year we’ll find out if BYU’s defensive deficiencies are a result of talent or scheme, as Bronco Mendenhall will resume in-game defensive play calling duties — something he hasn’t done since 2012.

The talent is there, with former four-star recruit Fred Warner primed for a breakout season and Bronson Kaufusi returning to his more natural position of defensive end after he struggled playing out of position last year at outside linebacker.

Where things are a little murkier is in the defensive backfield. Do players like Jordan Preator and Michael Davis have the instincts to play corner or are they just really fast?

How long will Kai Nacua be suspended for the role he played in the post-bowl game brawl? If the stars can line up and the defense can finally match what the offense has been doing since Hill took over at QB, the Cougars could be pretty hard to beat. 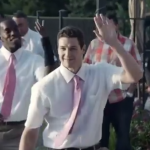 Even Jimmer Fredette is doing the Whip and Nae, Nae in 2015.

Everyone from Jimmer Fredette, Riley Curry and Jamaal Williams has been showing us how to Whip and Nae, Nae this summer.

It’s time for the football team to determine who has the most dancing skills and have them choreograph the best touchdown celebration since the Ickey Shuffle.

Who am I kidding? Williams is definitely the best dancer on the team, or at least the most apt to dance in public. Google Jamaal Williams dancing and find out for yourself. Here he is dancing on BYU Sports Nation, and here he is dancing at halftime of a BYU basketball game. With his gifts on the dance floor, it really is a shame that the NCAA has taken all of the fun out of scoring.

Get on the wagon: Utah County celebrates Pioneer Day Next post