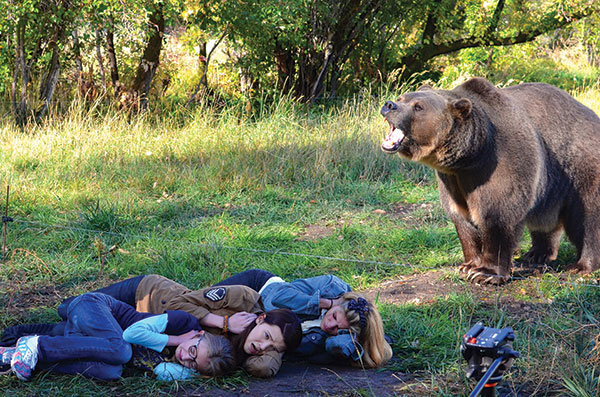 Every summer LDS girls ages 12 to 18 retreat to the woods for a week of camping, learning, laughing, singing and spiritual development. Plunged into an unfamiliar environment, the young women rely on each other and their leaders to grow through comfort-zone-expanding experiences.

A week at girl’s camp is impossible to replicate. But Lisa Valentine Clark says making a film about girl’s camp comes pretty close.

“After we secured funding and wrote the script, we had less than three weeks to film it. In that time, we experienced so many emotions. We went from cold to hot to hungry to tired to energized and excited — so emotions ran high,” Lisa says. “But it was also a testimony-building experience, just like girl’s camp.”

Lisa is co-creator, actor and producer of “Once I Was a Beehive,” a coming-of-age film about girl’s camp opening in theaters across Utah on August 14.

The story centers on a character’s experience at girl’s camp. Lane is a non-LDS teenage girl whose personal tragedy leads her to camp, where she is surrounded by feverishly excited camp leaders and equally enthusiastic peers. Together, the group encounters bad weather and bears, overcomes phobias and slowly builds meaningful relationships despite their differences.

Although filming — start to finish — took less than three weeks, the idea had been buzzing around Lisa’s head for years. Lisa and Hailey Smith forged a friendship during their stint with the improv comedy troupe “The Thrillionaires,” and discussions about their futures led to a shared dream to film an uplifting movie with an LDS theme. 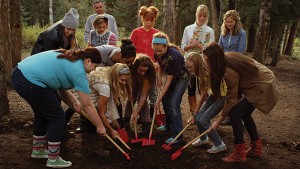 Throughout the film the young women complete tasks together that help them overcome their differences.

Years of dreaming converged when fellow friend and Thrillionaire Maclain Nelson finished his role as Elder Propst in “The Saratov Approach.” This was their chance.

“The success of ‘The Saratov Approach’ was our tipping point,” Hailey says. “It showed us that people wanted quality films about different LDS topics. Plus, people were already asking Maclain what he was working on next, so we got to work.”

Sharing their enthusiasm for the story and content, Maclain joined the team as the film’s director, with Lisa and Hailey as producers and actors. Their friendships created a foundation of excitement and implicit trust to finally bring their dreams to life and uplift summer movie-goers.

That’s where Maclain’s expertise came in. He was passionate about keeping up the momentum in this movie category — the uplifting-but-not-too-preachy genre.

“After ‘The Saratov Approach’ came out, members of the LDS community told me they loved it because they could watch it with their friends and neighbors without any embarrassment,” Maclain says. “With ‘Once I Was a Beehive,’ we used those same principles. It portrays LDS people being their true selves and is broadly relatable because we show it through someone else’s eyes.”

With Maclain living in Los Angeles, Lisa in Utah and Hailey in New York, they texted, Skyped and Google-Doc’d their way to a finished script, solid funding and the perfect cast and crew. In the heart of a cool Utah autumn, they were ready to film their summer movie.

The Floods Came Up

Just like a week at girl’s camp has its ups and downs, filming “Once I Was a Beehive” wasn’t monotone or monochrome. It was filmed in Payson and Provo Canyon in the throes of an unpredictable October. The cast and crew encountered everything from scorching heat to freezing rain. A few times, poor weather even forced them to shoot on an indoor lot in Provo.

But those were challenges they expected. What they didn’t expect was to nearly lose a major set piece. 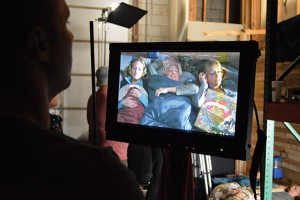 The girl’s camp theme is “Noah’s Ark,” so the movie producers hired a local woodcrafter to build a giant ark out of wood. When it was completed, a crewmember went to pick it up. That morning, Hailey received a frantic phone call. The ark had disappeared.

“The driver was heading down I-15 when he looked in the rearview mirror and realized the ark wasn’t there,” Hailey says. “We later found out the trailer had never been properly attached.”

The crewmember slowly drove back up I-15, searching for the ark. Then a miracle happened. He found the ark near the edge of the road by the Point of the Mountain, lying gently on its side. It wasn’t damaged, and, more importantly to the cast and crew, it didn’t cause any traffic incidents. It took 10 people to reattach the ark and trailer to the vehicle, but it arrived later that day ready to complete the set.

“We knew we would run into challenges during filming, but our ark disappearing and reappearing unharmed in the same day? It was a miracle,” Hailey says.

Amid the ups and downs, twists and turns of their short filming window, Lisa and Hailey still found time to create a mental scrapbook of their dreams come true.

“I’ll never forget all the times Hailey and I ran back to her van to get warm and review our scripts between takes,” Lisa says. “Throughout the filming timeline, we would perform at night while our babies were asleep, and despite all of the craziness our movie is about to premiere. I keep asking myself, is this real? And I love knowing the answer is yes!”

“This movie is empowering because we address what it’s like to be a teenage girl,” Hailey says. “But we show they’re not powerless even when things work against them. We don’t bring in a guy to save the day — the girls rescue each other.”

Although the movie is about girl’s camp, it doesn’t just appeal to girls and women. Maclain has shown the finished film to friends and family, and some of the viewers who have loved it the most have been fathers.

“We show such a special bond between the main character and her father,” Maclain says. “I challenge any dad to come see the movie for a peek into what their daughters might be experiencing.”

To Lisa, the film’s human experiences make it accessible to people of all faiths, ages and backgrounds.

“The themes in this movie touch on the human condition — like dealing with grief, faith, life and learning how to face your fears,” Lisa says. “Every person, male or female, can relate to that.”