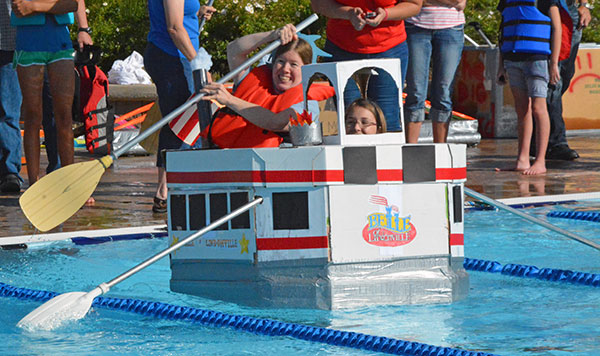 Row, row, row the cardboard boat down the pool.

“The highlight for me was seeing the creativity in the boats,” said Heath Bateman, Lindon parks and recreation director. “With the stipulations and the rules that we gave being pretty stringent cardboard and duct tape only, the uniqueness of the boats was really, really worth seeing. And the time that some people spent on it, that made us realize that they were thinking about it and making preparations for it.”

The idea for the event, which was free to enter and watch, came from volunteer Mark Spongberg.

“Mark came with the idea to us and we decided that we’d give it a try,” Bateman said. “We knew we would have a good turnout; there are a lot of scouts in this area and it’s worked out well for us.”

Outside of the boats needing to be made of only cardboard and duct tape, the other rules included that only two people could ride in the boat and they needed to complete the course (25 meters down and 25 meters back across the length of the pool).

For boats that stayed afloat through the 50-meter race, they could enter into the swamp the boat competition. The boats sailed across the pool as the teams tried to sink other boats.

Prizes were awarded to winners in two divisions: the 8- to 14-year-old division and the open division. Awards included: Fastest Boat, Team Spirit, Most Dramatic Sinking and Last Boat Floating.

Orem resident Kari Hicks was one of the first people to sign up for the unconventional race. Her husband and two boys, ages 4 and 7, helped her build the boats so everyone in their family could participate in the open division competition.

8–14 division: The Dominator and the Boats Still Holding

For inquiries about pictures, email rebecca@utahvalley360.com.