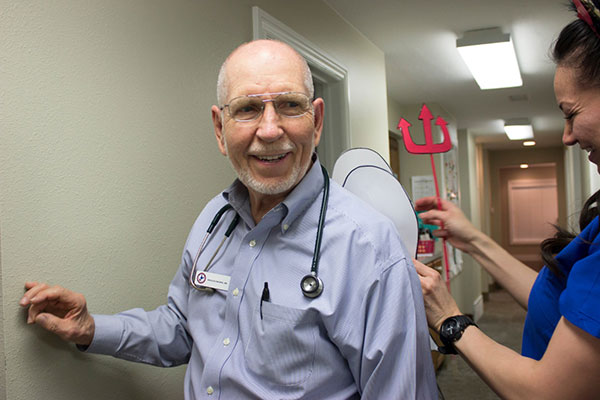 “I’ve worked with Dr. Hacking for 12 years and he’s always been calm and collected, even in emergencies,” Ruth Yodo, Dr. Hacking’s nurse, says. “To me, he’s like an angel with hidden wings. He has found his calling and is blessing others with it.”
Behind the scenes, Ruth had some fun and taped paper angel wings onto her friend and mentor, and sported devil accessories herself. (Photo by Alisha Gallagher)

But Doug chose neither of those likely options. He picked Orem.

“I thought it was a good place to start because there weren’t any pediatricians there yet,” Doug says. “I started my own practice in Orem in hopes that families would start coming.”

Families soon began pouring into his office. They came for help with colds and coughs, measles and meningitis. In addition to being on call every other night and making hospital rounds seven days a week, he went above and beyond by bringing a neonatal intensive care unit to UVRMC, allowing sick newborns to stay in Utah Valley for treatment. The NICU has since grown, allowing Doug to spend fewer sleepless nights monitoring infants and more time treating them after they’re released to their happy, relieved parents.

Even when things aren’t going well, however, Doug still manages to stay calm. Earlier this year, a mother brought in her two daughters who had fevers and unusual rashes. Doug knew it was the measles right away. 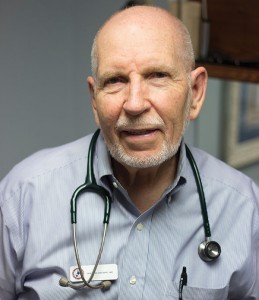 Douglas Hacking has spent the past 40 years weighing, measuring, soothing and saving countless children throughout the valley. (Photo by Alisha Gallagher)

“It had been years since I’d seen these symptoms, but after I recognized it, I called the Utah County Health Department and let them know I had two patients in my office with the measles,” Doug says. “I think I pushed their panic button, but they did a great job of handling it.”

News later revealed that their exposure occurred in Disneyland. Doug’s quick diagnosis earned him the “Friend of Public Health” award from the UCHD in April.

Doug’s work and service doesn’t stop when he’s away from the office. Outside of his formal practice, Doug volunteers with LDS Humanitarian Services to teach neonatal resuscitative courses around the world.

In the Dominican Republic and in countries throughout South America, he has trained healthcare workers in Spanish, which he learned on his mission to Uruguay and Paraguay and has maintained throughout his career.

Those trips take him away from the one-on-one time he loves with the children and families in his practice, so he improvises.

“If I’m going through the airport and see someone with a baby, I’ll tell them I’m a pediatrician and ask if I can hold their baby,” Doug says. “When I’m away from the office for too long, I can’t help but want to find a baby to hold.”

Doug is 74 and used to have plans to retire at 75. Now that he’s just a year away, he has put that idea on hold and now speaks of retirement with “ifs.”

“If I retired, I would miss the people I’ve come to know through the years,” Doug says. “I feel like it’s important for me to keep contributing my knowledge and experience to the help children in Utah Valley.”