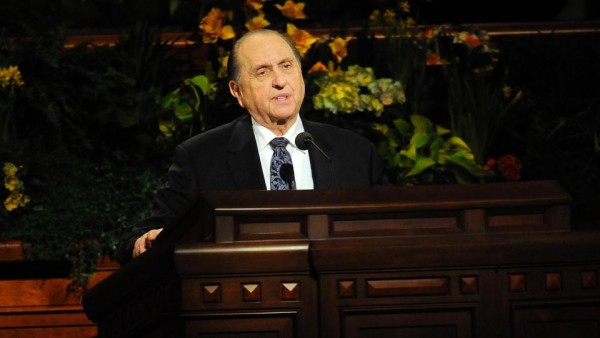 Keeping the Sabbath Day holy is a commandment with a promise. The Doctrine and Covenants reads, “But remember that on this, the Lord’s day, thou shalt offer thine oblations and thy sacraments unto the Most High, confessing thy sins unto thy brethren, and before the Lord. … Verily I say, that inasmuch as ye do this, the fulness of the earth is yours, the beasts of the field and the fowls of the air, and that which climbeth upon the trees and walketh upon the earth.” (Doctrine and Covenants 59:12, 16)

Even future leaders of The Church of Jesus Christ of Latter-day Saints made a decision to skip out on a meeting — sometimes with dangerous (or funny) consequences. Here are three moments when Church leaders missed their Sunday meetings. (Warning: It didn’t end well.)

President Thomas S. Monson once took a Sunday morning to go duck hunting with his brother Bob. It was the morning after the opening Saturday night in fall 1949. On page 133 of his biography, “To the Rescue,” the following transpired:

“They loaded their shotguns and trudged through the marsh to their boat, then stashed their gear in the flat-bottomed craft and dragged it into the water. Tom was in back, Bob in front. As Tom rowed, the craft struck a sandbar and Bob climbed out to push the boat clear. Neither can clearly explain what happened next, but Bob lost his footing, slipped into the mud, and pitched forward just as his 16-gauge shotgun fell from the bench in the boat and discharged, shooting straight at where Bob would have been standing had he not just lost his balance. The shotgun blast barely missed his broad back.

“The two brothers looked at each other — ashen. Tom got out of the boat and sat down on the side; Bob joined him. Neither spoke for a long time. Finally, Tom said, ‘Let’s go home.’

“He never again went hunting, fishing, or anything else of the kind on Sunday. That ‘near miss’ on the Sabbath in a marshland far from where he should have been got his attention. He had been protected but chastened ‘to measure up to the stature of (his) true potential.'”

In a little-known story from the life of President George Albert Smith (who was president of the Church from 1945 to 1951), he and his family skipped a session of general conference and instead attended the fair. People who recognized him at the fair congratulated him, though he didn’t know why.

According to historian Mary Jayne Woodger, who told the story in an interview with the Mormon Channel, it happened this way (follow the link and skip to 21:52 to hear the interview):

“The story is told that during conference on Saturday, he decided he would take his girls to the Utah Territorial Fair. He’s at the fair, and while he’s there, people come up and congratulate him, and he thinks he’s being congratulated because he has these beautiful daughters. He comes home and he meets this woman, and she says, ‘Don’t you know you were called to be an apostle today? Where were you?’ Of course, Joseph F. Smith comes over to the home and informs him that he has been called to be an apostle. He was called and sustained without being there and knowing of it at the time. Certainly a different time, different era.”

“To sit with (Matthew Cowley), to live in his home, to pray and to eat at his dinner table, and to be his close companion were some of the great blessings of my life. … He told me about some of the troubles the kids got in. The sons of the Apostles were not always as obedient as they should have been. Once during a meeting in the Salt Lake Tabernacle, they were up in a nearby barn trying to figure out how to smoke, and they set the barn on fire. The fire engines roared on both sides of Temple Square, and the meeting was dismissed so the barn that the sons of the Apostles had set on fire could be rescued.”