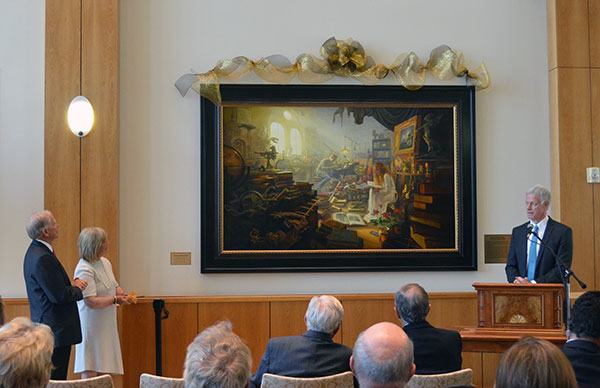 The curtain dropped revealing a painting of two young adults studying in a room filled with learning tools and instruments — a new piece at the BYU Gordon B. Hinckley Alumni and Visitor’s Center on Wednesday.

“Treasures of Knowledge,” the 52″ x 84″ oil on canvas painting, was commissioned by Leo and Annette Beus and the finished product was donated to the alumni building. While the painting has found it’s permanent home behind the front desk in the waiting area of the Hinckley Center, artist Greg Olsen was relieved to finally be able to sign his name at the bottom of the painting as the project was “one of the biggest endeavors (he’s) made in (his) career.”

“The process started about six years ago as we started trying to come up with an idea for the painting,” Olsen said. “We spent about five years trying to agree on a theme, which ended up being our quest for knowledge and the sacred and the secular.”

Olsen then spent half a year gathering stuff. 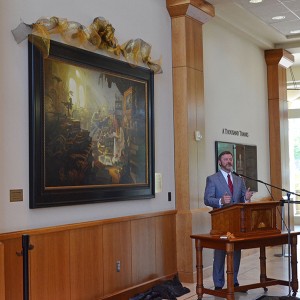 Artist Greg Olsen speaks at the unveiling of his newest piece, “Treasures of Knowledge.” Olsen said this was “one of the biggest endeavors I’ve made in my career.” (Photo by Rebecca Lane)

Yes, stuff. Rummaging through antique stores to find odds and ends, Olsen accumulated objects to create a set. He staged this set in his office and painted what he displayed.

He then got two real BYU students to model for the picture and he began putting the intricate details into the painting.

“The thing that I really like is people can create their own stories behind it,” Olsen said. “It’s open for a lot of viewer interpretation.”

Olsen, who is best known for his depictions of Jesus Christ, combines secular and spiritual learning in his description of the purpose of the painting written on the plaque on the wall.

“Jesus was the master teacher. He used objects as metaphors, analogies and symbols to teach lessons …. We can imagine what metaphorical lessons Jesus might teach using seemingly random objects such as those found in this painting.”

McKay Christensen, managing director of alumni relations, said the university was grateful for the gift.

“It represents so well what happens here at BYU,” Christensen said. “What I like about it so much is it tells the story of what happens to students — and alumni who come back for that matter — and their discovery of what happens uniquely here at BYU which is the melding of learning and faith. … And having that represented and drawn in a visual way here in the Hinckley Center in our alumni house is really incredible.”

Elder M. Russell Ballard and Elder Neil L. Andersen of the Quorum of the Twelve for the LDS Church attended the unveiling.

“It doesn’t have to be world famous to testify of the creator,” Andersen said.

Play a game of I Spy using “Treasures of Knowledge” for a chance to win. Play here.

I Spy: 'Treasures of Knowledge' by Greg Olsen Next post