Home LDS Being LDS Utah women, we know why you are single — it’s in the numbers

Utah women, we know why you are single — it’s in the numbers 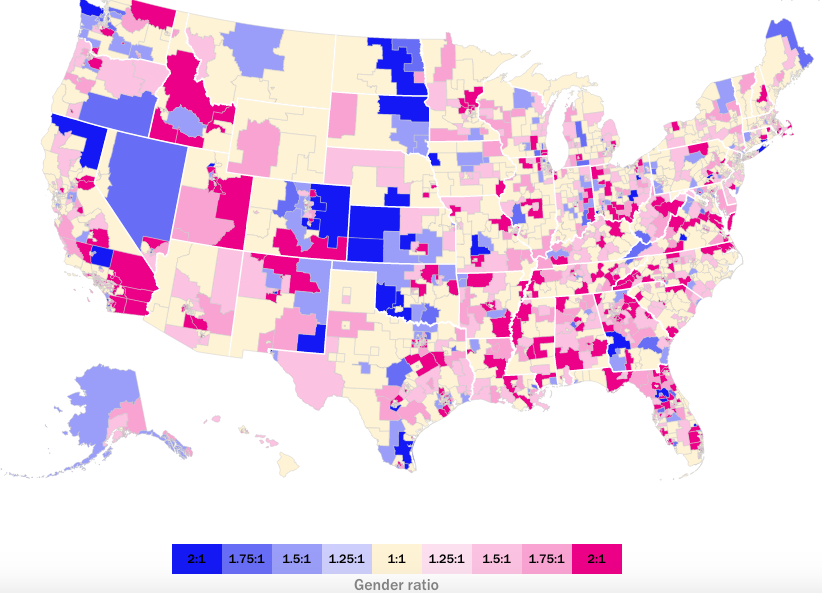 Using Census data from 2011–13, an interactive map with the Time article allows you to zoom in and look at demographics of specific cities. The darker shades of blue represent where there is a larger male population whereas the dark pink represents where the female population is higher than the male population. See the map here.

Utah single women, we have some bad news — the odds in the dating are in the men’s favor.

Writing about the “modern dating crisis,” author Jon Birger recently released his book, “Date-onomics: How Dating Became a Lopsided Numbers Game.” In an article published on Time’s website Monday, Birger shared part of his findings on how the United States demographics are skewed in the favor of men in the dating world.

The U.S. Census Bureau’s American Community Survey reported there are 5.5 million college-educated women in the U.S. between the ages of 22 and 29 versus 4.1 million such men, according to a 2012 population estimate. This is a total of four women for every three men. As the age group gets older, the disparity increases; there are five women for every one man in the U.S. for college grads age 30 to 39.

“It’s not that He’s Just Not That Into You — it’s that There Just Aren’t Enough of Him,” Birger said in his article.

[pullquote]”It’s not that He’s Just Not That Into You — it’s that There Just Aren’t Enough of Him.”

Oddly enough, Birger says Utah isn’t the prime example for a lopsided state in favor of men. In fact, Utah’s population has more men than women. Utah comes in having the fifth highest ratio of men to women in all age groups across the nation.

Zooming into the interactive map based on Census data from 2011–13, a closer look at Utah County cities shows the ratios of single men to single women. Here are the results for the two youngest age groups comparing single individuals who earned college degrees to those who didn’t earn a college degree. 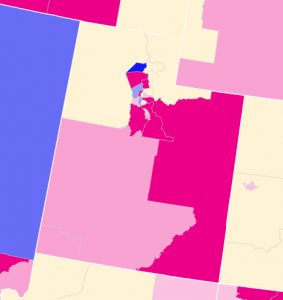 A zoomed in of the map on Time’s website shows Utah’s demographics. (Image courtesy Time)

Where single people don’t have a college degree, the numbers balance out in these two age groups. However, the disparity widens in favor of men once a college degree is obtained in Utah County. So it’s hard to be a single college-educated woman in Utah.

But it can get more difficult.

Birger’s Time’s article specifically focuses on the demographics of singles in the Utah LDS population.

“At first glance, the state of Utah — 60 percent Mormon and home of the LDS church — looks like the wrong place to study what I like to call the man deficit,” Birger wrote. “… But lurking beneath the Census data is a demographic anomaly that makes Utah a textbook example of how shifting gender ratios alter behavior. The LDS Church actually has one of the most lopsided gender ratios of any religion in the United States.”

A study by Trinity College’s American Religious Identification Survey (ARIS) between 1990 and 2008 found there are 150 Mormon women to every 100 Mormon men.

The bad news for women is that gap continues to widen. Birger wrote:

“The Utah LDS Church was in fact 52 percent female as recently as 1990. Since 1990, however, the Mormon gender gap in Utah has widened dramatically — from a gender ratio of 52:48 female to male in 1990 to 60:40 female to male in 2008, according to a study coauthored by ARIS researchers Rick Phillips, Ryan Cragun and Barry Kosmin. In other words, the LDS Church in Utah now has three women for every two men.”

With a supposed 50 percent oversupply of women, ARIS dug deeper, accrediting a higher rate of male apostasy for the demographic difference.

Brian Willoughby, who studies young and emerging adult dating relationships and marriage, is an assistant professor for the School of Family Life at LDS-owned Brigham Young University. He says the higher rate of apostasy from the Church is something he’s observed in his studies, but there are even more unique cultural changes affecting the singles scene.

BYU actually beats the odds as far as male to female student ratios go. In 2014, 55 percent of all daytime students were male while only 45 percent of the students were female. Of those students, 73.8 percent were single and, Willoughby says, they end to be “the upper devout faith and religiosity in the LDS community.” He said that as you get into ages 21–30 the number of religious men decreases while the single population increases.

Willoughby says there are many reasons for the disparity of genders: changing norms for marriage, LDS culture, unique requirements in mate selection, economic demands on adults, many devout LDS men getting married early and more.

Why are there fewer women on BYU campus? Stereotypes and culture suggest gender roles where women stay home with the children while men work and go to school. But Willoughby says that’s not something he’s seen.

“I see a lot of married women in my classroom,” Willoughby said. “I’ve seen a lot of women with children. I’m probably biased because I am more likely to hear about a student that’s stayed than a student that’s left.”

[pullquote]”There is a stronger and stronger pressure both from society and parents about getting an education and having a career path, even among an LDS population.”

Plus, there is a culture shift for women too.

Each semester, Willoughby takes a class poll in his classes asking how many of his female students were incentivized not to get married before graduating for college. There are always at least a third (and up to half the class) that raise their hands.

“There is a stronger and stronger pressure both from society and parents about getting an education and having a career path, even among an LDS population,” Willoughby said.

Despite the cultural shift, most BYU students express a desire to get married and many join the rest of the world in online dating efforts to find a spouse.

Birger pointed out in his study that even online dating sites show how single women are outnumbering the single men. Tristen Ure Hunt, founder of Mormon Matchmaker, a Salt Lake dating agency, shared she has “three times more single women than single men in her matchmaking database.”

Many singles use Tinder, a dating app that matches people if both parties “swipe right” on a profile photo, indicating they are interested. With 50 million users (45 percent between the ages of 25 and 34), Tinder has made it’s mark on the scene.

But even Tinder seems to be working in single men’s favor — at least at BYU.

Earlier this week Tinder released its annual list of “Top 10 most swiped-right schools,” and BYU men were named the No. 2 most right-swiped. BYU women didn’t make the top 50 list.

Strike three for the ladies.

Willoughby says that online dating and dating apps are just another part of a cultural change.

“I think a lot of the social media sites like Tinder feed into this new mentality which is more of a shopping mentality, and Tinder is the perfect example of this where I don’t need any more information than a picture.…”

So, yes, the dating world for young, LDS women with a college degree might be favoring men, but it is just an example matching the trend across the United States — the odds are statistically in men’s favor.