Home Life Home and Garden Home is where the garden is

Home is where the garden is

Richard and Tammy Sheffield stand inside “The Gatreebouse,” a gazebo and treehouse hybrid Richard built. By working in their yard together, the couple continues a gardening tradition that began 15 years ago with Richard’s late wife, Annette.

Beneath the shadow of Y Mountain and within the reach of the carillon bell echo is Richard Sheffield’s Provo home. Through the latched gate is a garden, humming with birds, buzzing with bees, brimming with life. This is where Richard’s story begins.

“We were attracted to this house because of the yard,” Richard says. “I like to garden, and Annette’s dad taught her to garden, so we decided to do more with it.”

Richard and Annette moved their seven children from Arizona to Provo 15 years ago after Richard took a job with a law firm in Provo. The Oak Hills neighborhood became their home.

Richard and Annette worked on the garden together for four years, planting flowers, vegetables and trees. One year, their children made a post with two street signs at the top — Sheffield (Richard’s last name) and Steenblik (Annette’s maiden name). They put it in the heart of the flower garden.

Then their lives were uprooted when Annette was diagnosed with cancer. 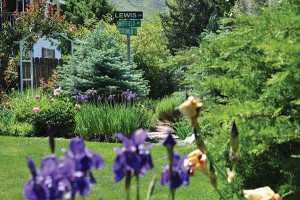 The street post in the heart of this Provo garden represents the life paths of Annette, Richard and Tammy Sheffield. (Photo by Richard Sheffield)

“She was already in an advanced stage when she was diagnosed,” Richard says. “The three years we had with her after that were a miracle.”

“I wanted her here as long as possible, but we knew it was time,” Richard says.

Remembering that Annette preferred gardening over all other household duties, Richard and his children took care of the garden in her place.

“It was harder to keep it up after she passed away, but working in the garden became a family event,” Richard says. “We drew a lot of fulfillment from working on it together.”

Later, Richard remembered Annette’s wishes and began accepting friends’ requests to set him up on dates. He went out several times, but nothing clicked — until he heard about Tammy, who was an administrator at Intermountain Healthcare, having previously acquired a bachelor’s degree in chemistry, a master’s of public administration, a master’s of public health and a doctorate in medicine.

And she loved to garden.

The more Richard learned about Tammy, the more he wanted to meet her.

“It was attractive to me that she had gone on with school and her career to create a great life for herself,” Richard says. 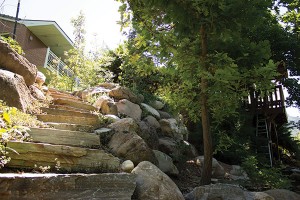 Richard and Tammy planted scrub oak trees next to the stone steps they bought in Oakley, Idaho, where Richard’s mother was born. (Photo by Richard Sheffield)

They dated, fell in love and married, and today they love working on the garden together at the end of each day — Richard tending to the vegetables, Tammy focusing on the flowers.

After Richard and Tammy’s marriage, he and his children added Tammy’s maiden name — Lewis — to the top of the street sign post in the garden. Richard says it feels like Tammy and Annette are friends who share a unique touch and passion for growing flowers.

“Part of the reason I married Tammy was because she wanted to learn about Annette and her life,” Richard says. “I can talk to her about Annette because

Tammy has never felt like she has to be a substitute,” Richard says.

The garden will always be a fulfilling part of their lives. It’s where Tammy met Richard’s children for the first time, where they built the “Gatreebouse” (gazebo and tree house hybrid) and it’s where three street signs remind them of the teamwork they’ve experienced to create a beautiful yard and grow a happy family.

Celebrity lookalikes: 8 locals who will make you do a double-take Next post