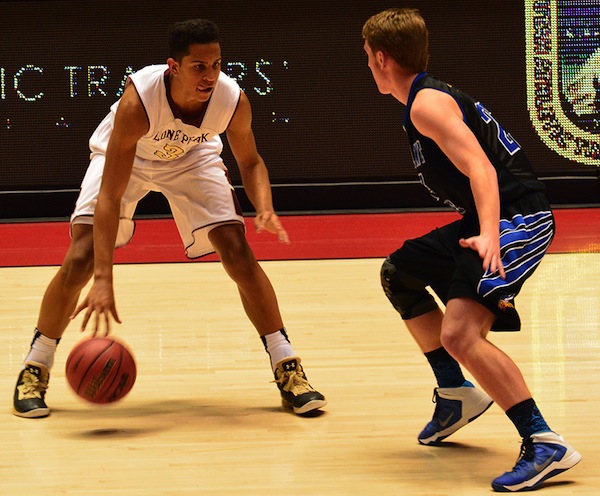 Lone Peak guard Frank Jackson will be taking his game to Duke.

Jackson announced he is committing to sign with the Blue Devils for the 2016-17 season on Tuesday afternoon. The Lone Peak senior chose to play for Duke over Stanford, BYU and Utah after taking a campus visit to Durham, North Carolina during the final weekend in August.

Duke is the defending men’s basketball national champion after defeating Wisconsin 68–63 to win the 2015 NCAA Division I Men’s Basketball Tournament. A history of success for the Blue Devils, who have won five national titles and reached 16 Final Fours, appealed to Jackson.

[pullquote]“They’re a winning program. They win championships. That’s what it’s all about. Coach (Krzyzewski) flat out likes to win. That’s kind of a factor with me because I like to win as well.” —Frank Jackson, Duke commit[/pullquote]

“They’re a winning program,” Jackson said. “They win championships. That’s what it’s all about. Coach (Krzyzewski) flat out likes to win. That’s kind of a factor with me because I like to win as well.”

JJackson originally committed to play for BYU before opening up his recruiting again as a junior. The coaching staff at BYU continued to recruit the five-star guard after his decision and was completely supportive of his decision to explore his options.

Jackson drew attention from college basketball teams all over the nation with his athleticism, quickness and scoring prowess. Making a final decision involved significant time spent in thought and prayer. Once Jackson took his visit to Duke, however, everything that he saw there made it clear what he needed to do.

He was impressed with how the team practiced and played on the court and lived off the court. Jackson felt like this was the right environment for him to grow and flourish as a basketball player.

“They shot to the top of my list,” Jackson said. “It’s Duke basketball. It’s every kid’s dream to play there.”

Jackson is the second high profile LDS athlete to pass up BYU to play basketball at Duke in recent years. The Cougars heavily recruited Jabari Parker out of high school before he opted to play for the Blue Devils for the 2014–15 season. After one season at Duke, Parker went onto an NBA career with the Milwaukee Bucks.

Could Jackson follow in Parker’s footsteps and find himself in the NBA after one season of college basketball? He is still undecided on if he will serve an LDS mission down the road and dreams about eventually playing in the NBA.

Playing at Duke could open the door for Jackson to pursue those pro basketball dreams sooner rather than later.

“He’s going to be playing with the best players in the best conference,” said Al Jackson, Frank’s father. “He’s got to bring it every night. That’s what will help him grow from the level he’s at now to the next level.”

An Insider’s Guide to the Timpanogos Storytelling Festival Previous post