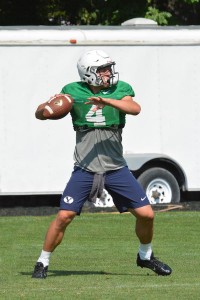 Taysom Hill throws the football in a practice during Fall Camp. (Photo by Matt Bennett)

“It was so long ago, I don’t know what more you can do to punish the kids besides the scrutiny that comes with it,” Mendenhall said. “I don’t know what else needs to happen for these kids to have learned their lesson than what has happened. We won’t be announcing the suspensions before the Nebraska game; we’ll announce them after.”

Following the Cougars double-overtime loss to the Memphis Tigers at the Miami Beach Bowl in December 2014, a fight broke out between the teams. The most shared footage included then-junior Kai Nacua coming behind a Memphis player and throwing a punch.

In January, the Tigers announced 12 suspensions associated with the brawl.

Also in the press conference on Monday, Mendenhall announced two captains for the team: quarterback Taysom Hill and defensive end Bronson Kaufusi. Mendenhall has typically chosen four captains in the past, but this year he stuck with two because of how the team voted.

“The reason we chose four in years before is because two players on either side of the ball had similar or almost identical votes,” Mendenhall said. “This year was such a wide margin it didn’t make any sense. I prefer two on any given year. But, we will have a special teams captain that will rotate every week. The special teams player of the week will be the captain next week, which is going with the idea of earning that spot.”

Kaufusi was surprised by his selection.

“It’s very humbling to be picked as a captain,” Kaufusi said. “I like having this responsibility so that I can elevate my game and represent the defense.”

BYU football begins it’s 2015 season on Saturday, Sept. 5 in Nebraska against the Cornhuskers. The game will be televised nationally on ABC. Live streaming is available through WatchESPN on ESPN3.